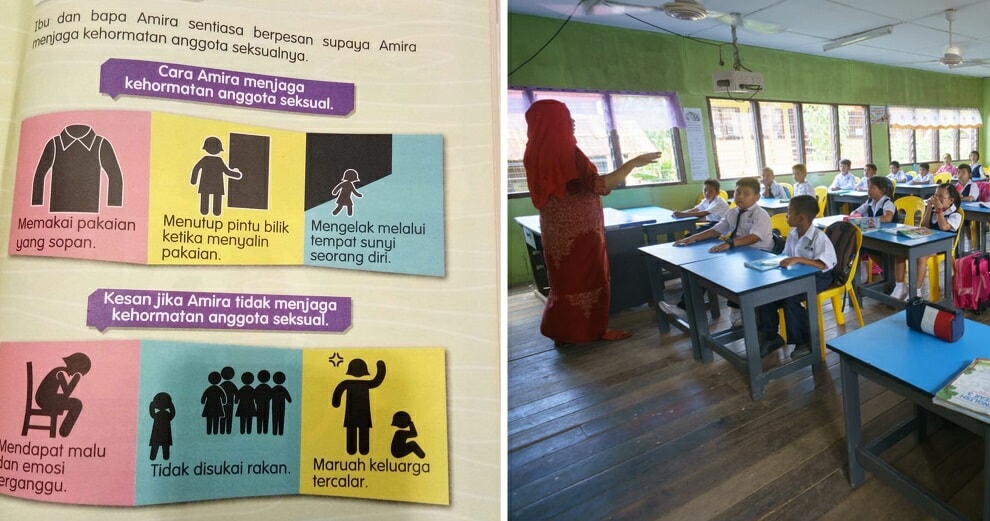 Yesterday evening (15th January), a tweet showing an excerpt from a school textbook began to circulate online, advising young girls how they can protect their sexualities and avoid sexual harassment.

The tweet was shared by a user who was concerned over what this guideline was teaching young girls, saying that it was inadvertently putting the responsibility on girls to protect themselves from sexual harassment instead of teaching people not to harass. In a separate tweet, the user clarified that this was a textbook for Health Education.

From a Darjah 3 textbook. Victim-blaming is not acceptable. Not only does this put the responsibility of preventing sexual harrassment solely on the shoulders of a girl, it also implies that she had it coming! Shaming kids is not acceptable. @hannahyeoh @maszlee @KemPelajaran pic.twitter.com/qORfLu9ZTj

The page from the textbook describes how a young girl named Amira is being advised on ways to protect her “kehormatan anggota seksual” (modesty of private parts). The points listed out are;

The book also goes on to list out what happens to girls who do not protect their modesty, the consequences of which are;

The tweet received a lot of comments condemning how this subject matter was being approached by schools. Some also pointed out that boys should be educated on respecting others as well, and that that the sole responsibility of protecting oneself does not only fall on girls.

Even deputy Women, Family, and Community Development minister Hannah Yeoh responded to the tweet once it began to circulate on the social media app, agreeing that the syllabus needed to be reviewed.

In agreement. Needs to be reviewed.

Update: The Ministry of Education has since responded to this viral post, acknowledging that it can be misinterpreted by students. According to Astro Awani, the ministry will be taking swift action to correct this error. A translated excerpt from the Ministry’s statement addressing the matter reads,

“The Ministry of Education has decided to improve the content of this textbook by preparing a correction in the form of a QR Code that will be uploaded on 17th January for teachers, students, and parents to access online.”

The correction will also be printed out in the form of stickers for students to paste on top of the page in question. These stickers will be distributed to all schools starting 29th January.

What are your thoughts on this being in our primary school education syllabus? Let us know in the comments below.

Also read: Govt to Work on Sex Education Syllabus After Stats Show Students as Young as 13 Are ‘Active’