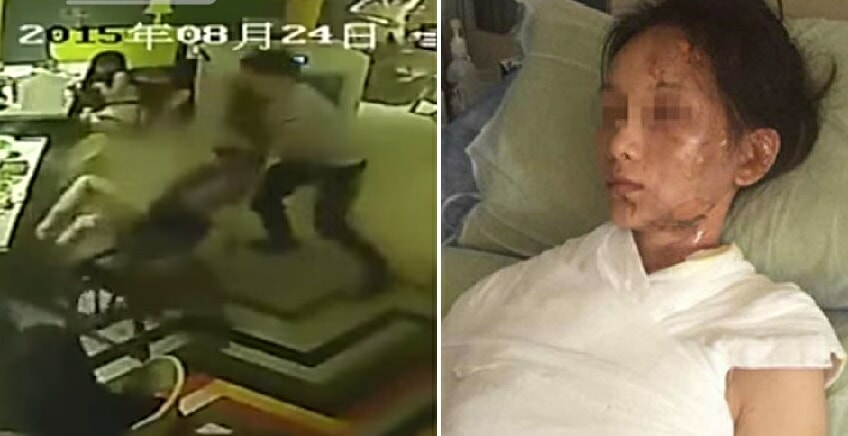 Wenzhou, China – A female customer in a hotpot restaurant was severely burnt after a waiter pour scalding soup over her.

The both had a dispute earlier on and then she posted a bad rating on social media.

Translation: Service was terrible! Asked him to add soup, but he told us there’s still soup [in our hotpot]. So do we have to wait till the soup dries up before you’re willing to add more? Asked for the manager but he said “it’s ok, who you call will not help”.

The woman, Lin, engaged in a small argument with the waiter who was identified by the police as Zhu. After her post, the waiter immediately saw it and went batshit crazy on her. He took a big pot of boiling soup out and poured it on her, damaging up to 42% of her body (mainly her head and upper body) and then even beating her up.

Watch the video of the disastrous incident captured from the restaurant’s CCTV:

“By the time the ambulance arrived he still had a horrible grin on his face,” Lin’s mother said.

Here are some images of the aftermath:

Although Zhu has been taken into custody by police, he might get away with criminal charges since he is under 18 years old, according to the police.