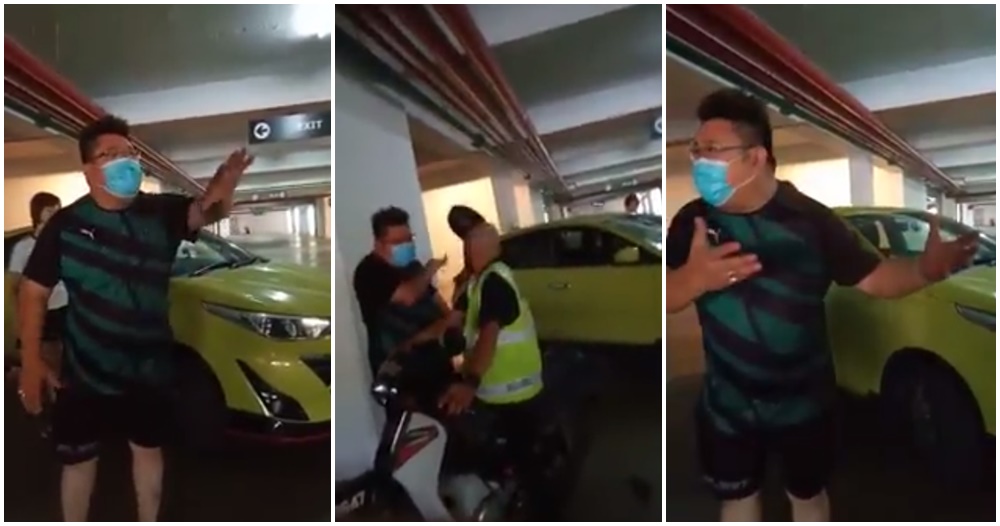 A man recently went viral on the Facebook group KL 吹水站 , after he was caught on video, slapping and yelling at a security guard in a parking lot for clamping his car.

According to the post, the security guard was just following orders to clamp the car as it was parked in a reserved parking bay. However, the driver of the car was outraged that his car was clamped without warning. In a video documenting the conflict, the man can be seen slapping the guard and yelling at his face. “Why didn’t you tell me? Why did you make trouble for me like this? We pay you to take care of this premise!” The security guard can be seen clearly taken aback by the man’s physical confrontation. He tried to calm the man down by saying that he will unclamp the car and that he was just trying to do his job.

“There got so many parking spots…why you want to clamp me? I also didn’t kacau (bother) you.”

The security guard again tried to convince the man that he was just following orders but the enraged man kept asking why they didn’t give him a warning before clamping his car. The man could then be seen speaking to someone on the phone to complain that even on the security guard’s first day, he was making a lot of trouble. He kept insisting on the other security personnel that they should have given him a warning. “If you create trouble for me, I will also create trouble for you,” said the man in the video.

In the Facebook post, it was said that the condominium usually allocates two parking bays for their residents but some families have more than two cars. However, the man had parked in a reserved parking bay that was not his and the security guard was sent by the management to clamp his car.

Who do you think is at fault here? Let us know in the comments.