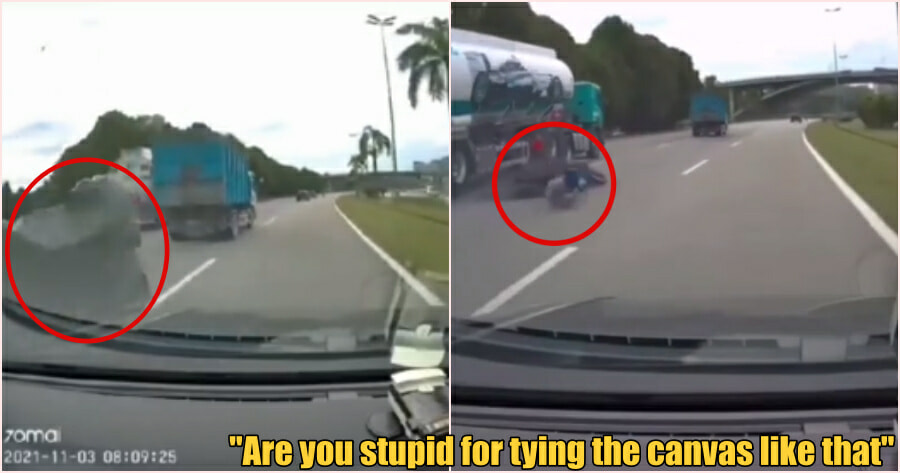 There have recently been an abundance of road traffic accidents involving lorries and trucks.

However, this particular incident has got to be one of the most avoidable accidents on them all, as reported by Harian Metro, a motorcyclist and his passenger were almost killed when the canvas on top of a lorry flew off and clung to the motorcyclist who was behind the vehicle.

The video, which was a camera footage from an unknown source showed the floating canvas “wrapping” to the bodies of the two motorcyclists which caused them to lose control and fall over. 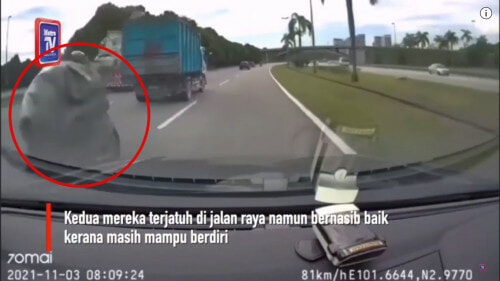 Scarily enough, next to the motorcyclists was a huge oil tanker which they narrowly missed as they fell off the bike and onto the road.

Fortunately as shown in the video, the two appeared to be safe and standing as the lorry which detached the canvas was nowhere to be seen. 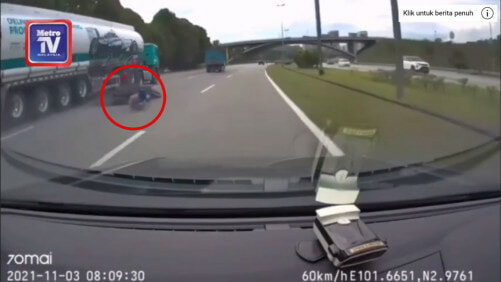 As reported by Harian Metro, Putrajaya District Police Chief, Assistant Commissioner A Asmadi Abdul Aziz said that so far, the police have not received any report on the incident.

He added that the incident may have happened on the border of Serdang, Puchong or Sepang.

Netizens shocked after witnessing the near death experience

A tweet by netizen user Rudy Akhbar who had reposted the video on his Twitter, garnered plenty of attention from other users. His reposting of the video has over 150,000 views and over 7,000 shares.

His caption reads, “Are you stupid for tying the canvas like that.”

“I hope that the motorcyclist summons the driver of the lorry till he is left with nothing. So stupid. Thankfully he wasn’t run over,” he added.

In his following tweets, Rudy explained that the motorcyclists are not at fault for the incident as it is ultimately the lorry driver’s fault.

“Because it is dangerous when you have lorries like this.”

The comments section of his post were filled with netizens expressing their concern for the motorists.

One user said, “I hope that the motorist gets compensated enough to be able to buy a car with case. This is the case of life and death. His parents raised him by using so much time and money. Just because of the careless act of someone, one’s life could be gone.” 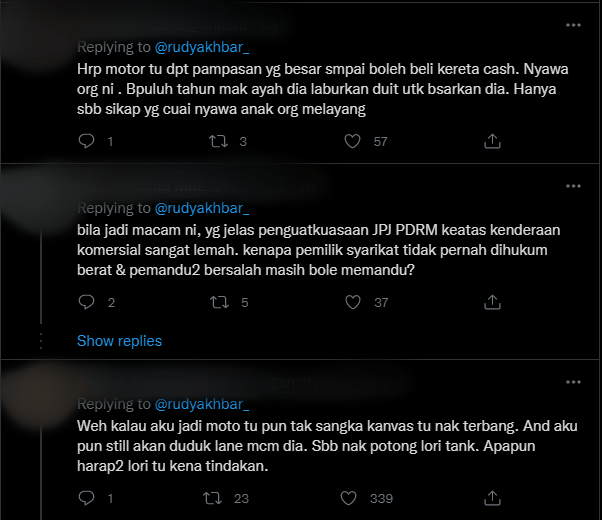 Another said, “If I was the motorist I wouldn’t expect that the canvas would detach. I would also be in the same lane as he did. Whatever it is I hope that the lorry driver will face severe punishment.”

Meanwhile, some netizens shared instances of their similar experiences.

One user said, “Last week me and a friend saw a lorry that was just like this. It was carrying an ice box and its lid seemed like it was going to come off. I managed to take over and honked at him to indicate it. I saw that he stopped on the side of the road and maybe fixed it. I felt relieved to continue my journey.”

Another user said, “I have been in a similar situation in front of Jalan Istana. There was a lorry which was carrying reinforced concrete. It was sticking out a bit as it was too long and from behind I could see that it was wobbling (not tied tightly).”

“Not even five seconds later, truly, all of the reinforced concrete pieces became undone. It was like a scene from ‘Final Destination’,” they added. 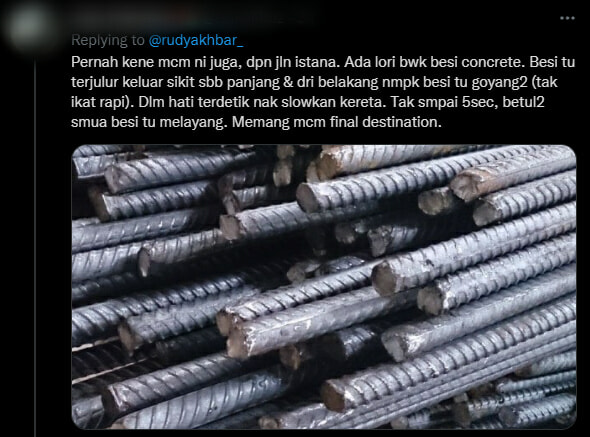 We hope that a proper investigation is done into the case and that the affected party will get the compensation it seeks. 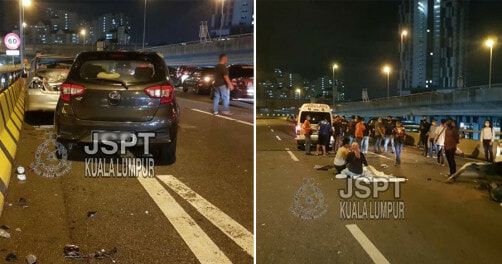