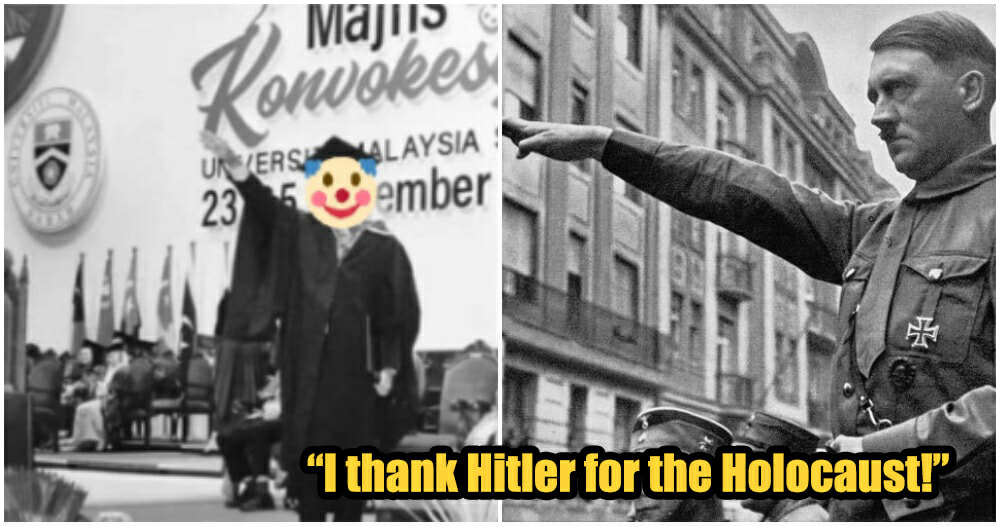 It’s not convocation season if you aren’t bombarded with pictures and posts from your friends or relatives on the happy occasion. It is a happy and nervous moment to go up on the stage and receive a scroll as a symbol of your hard work. But, it seems like the theme for this year’s graduations is to be…. demonstrative.

A Twitter user posted a picture which was taken from Facebook, where a graduate from Universiti Malaysia Sabah boasted about using a Nazi salute in protest of Israeli violence in Palestine after receiving his scroll. 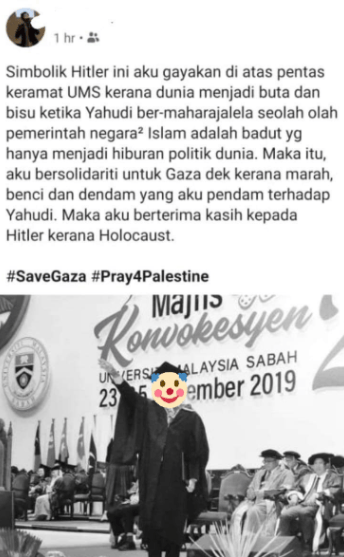 “I’m presenting the Hitler symbol on the UMS stage because the world stood silent and blind when the Jews were terrorising others as though Islamic rulers were clowns and entertainers for world politics. Hence, I’m in solidarity with Gaza due to the anger, hate and grudge I hold towards the Jews. So, I thank Hitler for the Holocaust.”

We’re genuinely confused as to how this student was allowed to graduate. The statement and gesture was inappropriate, offensive and reductive to his cause. While the actions of Israel are contemptible and are rightfully being vilified, the adoption of a symbolic salute from one of the most catastrophic and outright evil movements in history is NOT the way to protest anything.

Needless to say, Malaysians were enraged with his gesture and were quick to condemn him (rightfully so!) on various social media platforms.

This person who asked all the right question:

“Sometimes we feel like we’re smarter than most people when the truth is that we’re shallow minded and lack intelligence. It’s sad seeing graduates like this.”

And this calls for equal and fair treatment based on a previous incident:

It’s terribly disappointing that this is the level of understanding a local graduate has of world affairs and history. It’s difficult enough trying to be taken seriously as millennials/gen Z kids without people constantly imposing their harsh judgement, but it’s incidents like this that enforce the stereotype that our generation is shallow and lacking understanding. And as for the issue he was protesting in the first place, it must be said that you can’t fight evil with evil!

Also read: Netizens Are Calling For UM to Retract Graduate’s Degree For Asking Vice-Chancellor to Resign 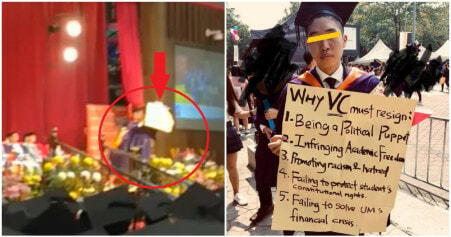