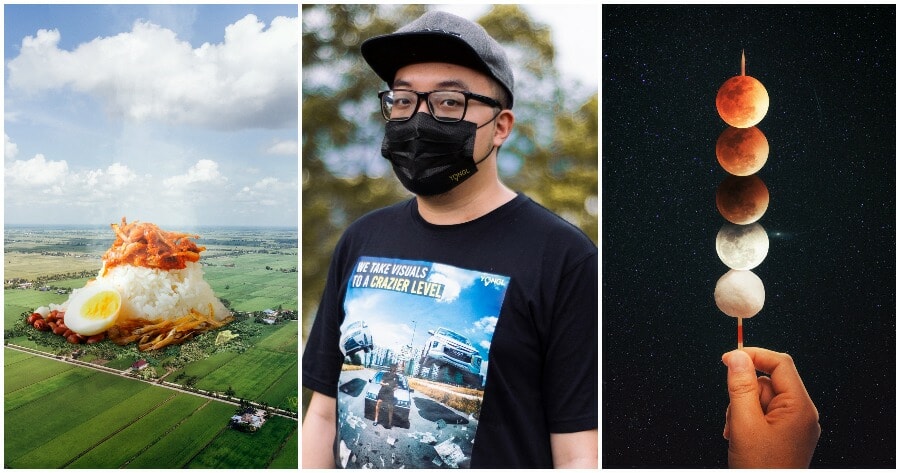 As Malaysians, saying we’re fond of our food is probably an understatement.

One Malaysian artist decided to illustrate his love for our local cuisine by reimagining popular Malaysian food over local landscapes. His fun and innovative designs soon went viral on social media and we can definitely see why! Just look at the way this kuih lapis building is being ‘constructed’. 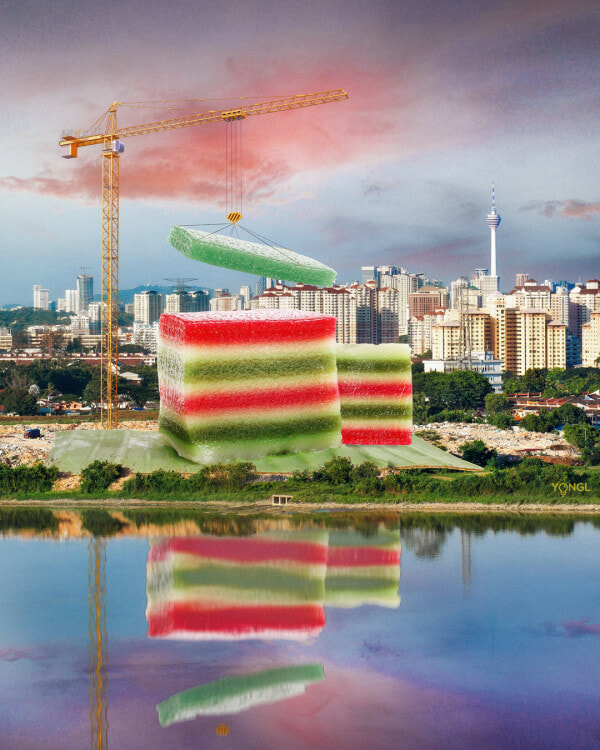 We reached out to Tan Yong Lin, the brilliant 25-year-old photographer and digital artist behind these creations to find out more about what inspired his artwork. Yong Lin, also known as YongL grew up in Penang but has been working and living in Cyberjaya for the last two years. “I miss Penang terribly, especially the food,” he shared with WORLD OF BUZZ. YongL’s art is known for the way he twists daily perspectives into creative visual displays.

When asked about his background in the world of digital imaging, YongL told WORLD OF BUZZ that he began drawing and painting when he was a child and eventually picked up an interest in photography. “I gradually immersed myself in the digital realm, learning various digital programmes such as Photoshop, 3D, and visual effects, and incorporating them into my photography workflow.” His workflow often starts off with a sketch or a drawing. He then photographs the pieces needed to create the final visual and works on the computer to finish up.

“So it’s like a creative ‘mixed martial art,’ where I use a variety of abilities and tools to accomplish my goals.” 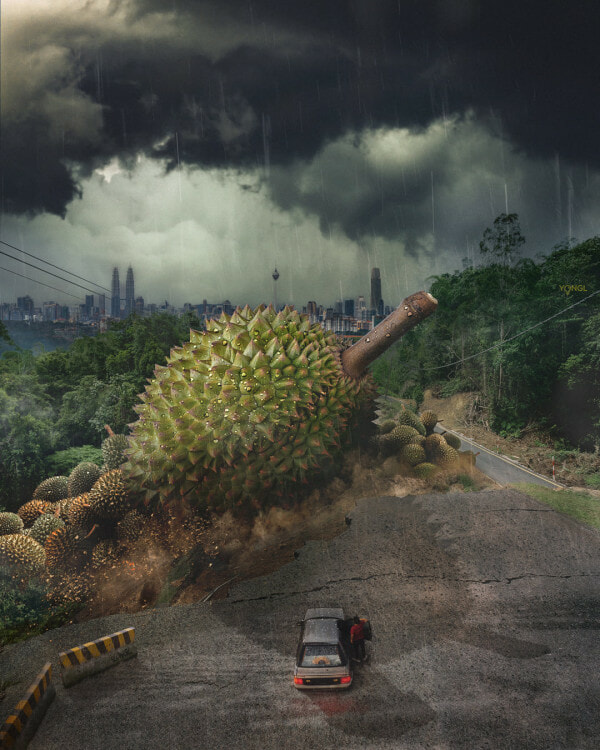 When asked about the inspiration behind his cool Malaysian food designs series, this native Penangite exclaimed “Malaysia!” He realised that Malaysians tend to take the variety of food for granted as he always misses the food back home every time he goes overseas, even if it’s just for a short while.

“So I decided to make a series out of regular everyday Malaysian dishes. We will never realise how valuable these foods are until we leave Malaysia.”

Speaking further about the Malaysian food series, YongL told WORLD OF BUZZ that he usually starts off by sketching or visualising the final look before getting the food to shoot. He added that during the MCO times, it was not easy for him to access his materials. Alternatively, he would purchase these food images from stock photography websites. He would at times use landscape photographs from his previous photo archive as well to execute his composition.

“The roti canai artwork, for example, was photographed on a real location at Cyberjaya (roundabout), and the roti canai and teh were then computer composited into the artwork.” 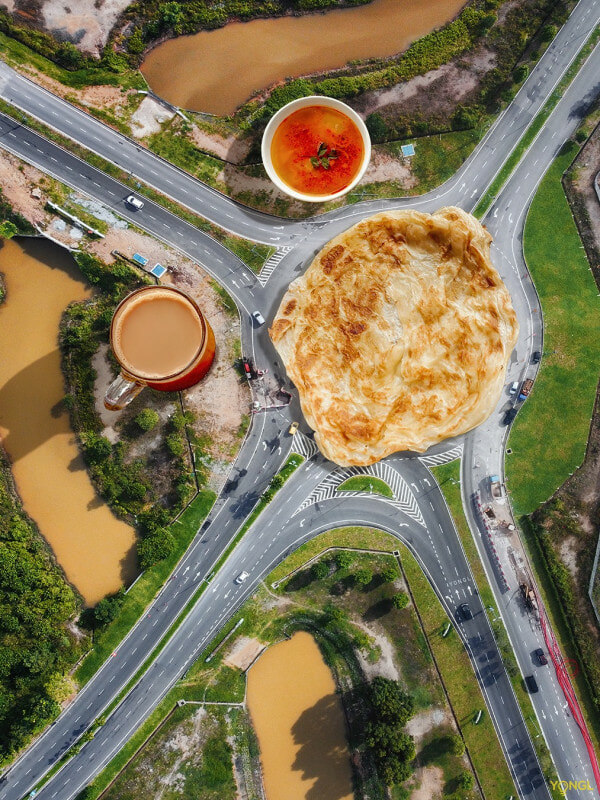 YongL has received numerous awards from around the world and also shared that he is working on a big series that involves the  Malaysian landscape, people, food and culture. “My environment and what I go through on a daily basis has a big influence on me.” He believes that everyone would be able to accomplish the art of great quality if more attention is paid to what is going on around us locally.

“Food is just the beginning, but I’m not sure why my post was shared so many times overnight when it’s probably only 10% complete! So please stay tuned for more! I am trying my best with my team!”

He also hopes that one day, he would be able to his projects into reality, perhaps a short film, or movie on the big screen. YongL shared that for now, he would only be able to execute this vision in the form of still images or photographs due to budget constraints. 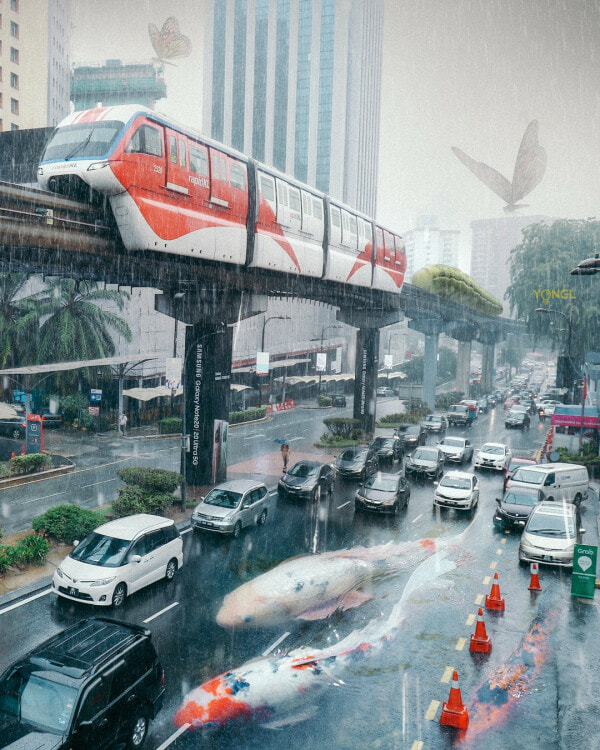 Meanwhile, he treats his work as a good learning process as he puts in the effort to produce art from his heart and wants to share his true feelings via his work.

We wish YongL all the best in the digital industry as we look forward to more creative artworks from him! 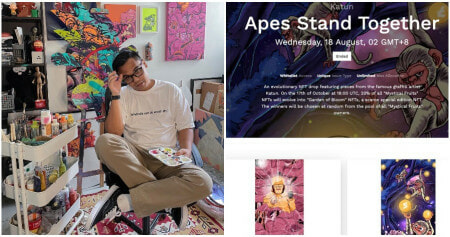