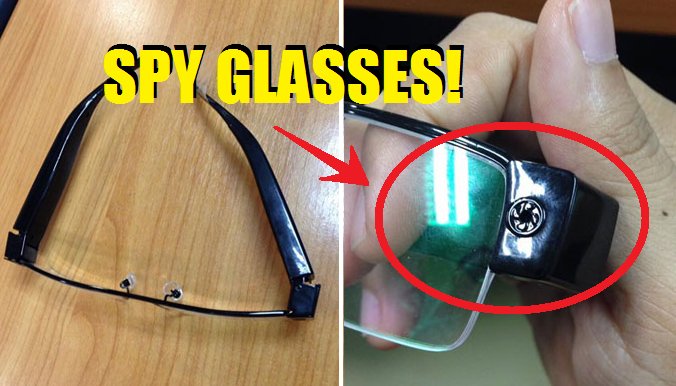 Three Thai students were caught and have their plan foiled after trying to cheat in their medical examination.

It was one of the most elaborate plans used by students as the trio went as far to obtain spy glasses and smart watches to cheat for their paper.

They were busted when the invigilators noticed that the glasses they were wearing were unusually thick. That’s what she said.

Upon closer inspection, it was discovered that the rims of the glasses had cameras embedded in them! Sounds like something straight out of a Mission Impossible movie.

The trio from Rangsit University were obviously disqualified from the entrance examination and banned from enrolling into the university. However, it was unfortunate for the other students as well as the director of the university had cancelled the exam.

Arthit Ourairat, Director posted imaged to his Facebook page while announcing the news of the exam being cancelled.

“This was the most high-tech exam cheating system I’ve ever seen,” Arthit said.

In their plan, the students had hired a group of people to answer the questions for them. So during the test, they will be ‘live streaming’ wirelessly to the group of people who will then send the answers to their smartwatches.

The three students have reportedly paid about THB50,000 (RM5,750) to get the answers, and they would have had to pay an additional THB800,000 (RM91,900) if the university accepted them, according to Post Today.

The students and group of people remained unnamed, most likely to safeguard their future.

The exam, which was held on Saturday and Sunday, had over 3,000 students taking it in 130 different locations.

Due to the cheating, the university rescheduled their entrance exam to May 31st and June 1st as they believed more people were involved in the cheating.

It also goes without saying that they have banned all accessories by students who are sitting for the paper.

Nice try guys. Maybe you could try applying for the CIA instead. Thennn again you got caught, so maybe not!