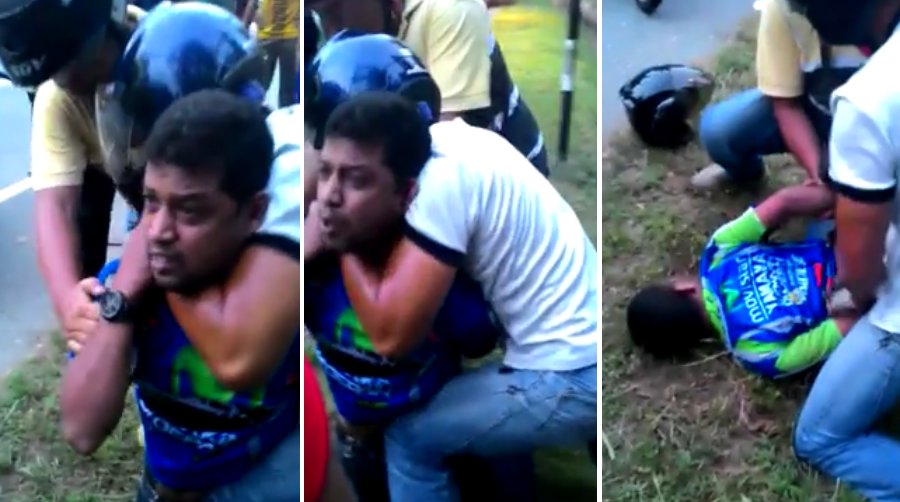 Police brutality has come under tremendous scrutiny in international media as of late and this case in Lenggong, Perak has set the internet in a world of buzz! #punintended #shamelessselfpromo

Seriously though, this video surfaced via a Facebook post by Suhur Ghazali showing two plain-clothed men (later to be confirmed as police officers) wrestling the innocent teacher.

One placed the teacher in a chokehold and takes him down to the ground whilst the other cuffs the man. The teacher is heard claiming his innocence by insisting the officers got the wrong guy.

Seriously, who’s that dude who sempat take video of the whole thing anyway?

That same post also contains a screen grab of a post from another Facebook user which states that the officers apparently mistook the teacher for a drug addict and did not believe his alibi that he was just done with giving tuition to a UPSR student.

A report by Berita Harian says that the officers had injured him and arrested him, later bringing him to a police station where the teacher called the headmaster of his school who swiftly arrived at the station to vouch for his colleague. The teacher was cleared and was taken to a local clinic for treatment. He sustained hand injuries and was given 3 weeks worth of sick leave.

One of the police officers has been remanded for four days as granted by the courts. He will be tried under Article 325 of the Penal Code for voluntarily causing grievous hurt which, if convicted, will carry a maximum of 7 years imprisonment or a fine.

One can only hope that ‘guilty until proven innocent’ is more than another empty phrase. Druggie or not we all deserve to be treated respectfully. What do you guys think? Have you been wronged by a police officer? Share your stories with us, we may just feature them next!