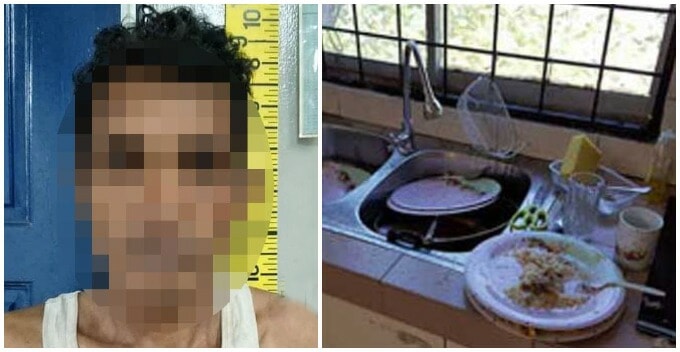 There are some people who live in very neat and tidy houses that could even be compared to those showcase house developers use to convince us that our empty shells have the potential to be dream homes. There are also people who see a mess and can’t even of anything else until it is all cleaned up, for example, the dirty dishes in the sink.

Doing the dishes is oftentimes a drag for most, but not all, are lazy to wash up after themselves. There are times when people put it off until the last minute before our moms or wives start yelling at the top of their lungs for us to wash it. This man, however, took the scolding way too seriously and injured his housemate due to his dissatisfaction at being nagged.

A man in Lahad Datu suffered serious injuries from being slashed by a parang last Tuesday (29th July). It was believed that it was due to him scolding his housemate for not washing the dishes after eating at a workers’ plantation house at Cenderawasih.

The incident had occurred at around 3 am, and the 29-year-old plantation worker, fortunately, managed to escape to his supervisor’s house which was 500 meters away from his residence, reported Berita Harian.

Lahad Datu District Police Chief, Assistant Commissioner Nasri Mansor said that the victim was believed to be sleeping in his room before the 25-year-old suspect knocked on his door. 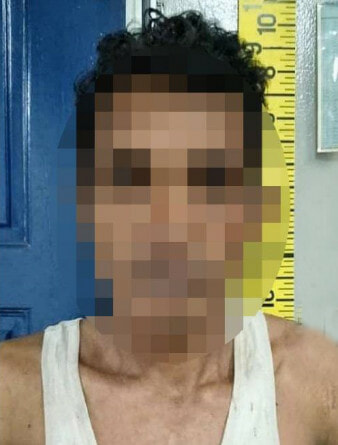 “As the victim opened the door, the suspect directly attacked with a machete while pushing him onto the floor and conflict ensued.”

“The victim then managed to snatch the machete away from the suspect. He suffered injuries on his head and left shoulder, along with some scratches on his left cheek from the strife,” said Nasri in a statement.

He added that it was believed that the suspect went out of the victim’s room only to come back with another machete that he retrieved from the kitchen.

“The 25-year-old ran after the victim, who had just wanted to get out and try to escape to their supervisor’s house, which is located not too far from the crime scene.”

“The suspect, however, did not manage to block the victim as he had arrived at the supervisor’s house. He was then brought to a clinic at Cenderawasih by his supervisor and was unconscious until he was sent to Lahad Datu Hospital,” he said.

Further commenting on the incident, Nasri said that the incident was believed to have occurred due to the victim scolding the suspect.

“The victim had once scolded the suspect for not washing the dishes after he ate. The victim suspected that the suspect had grudges against him from the scolding. It was said that they had never been involved in an argument before this.” 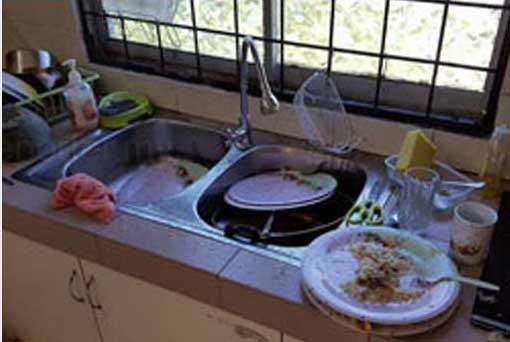 “On the day before at around 6 pm, the 29-year-old victim claimed that he saw the suspect acting in a depressive manner. He then asked if there were any problems that he was facing, but the suspect only kept silent.”

“The victim had also brought him out for home-style village treatment and the suspect stated that he felt better,” said Nasri.

According to him, the investigation found that the house was resided in by four people, two of whom are believed to have run away out of fear during the incident.

The suspect was apprehended at around 1.50 pm on the same day at the worker’s house.

“The suspect was injured on his ears and his right forefinger. The police had also taken away two machetes as the case objects that were believed to have been used in the struggle.”

“The case is being investigated under the Penal Code Section 326,” he said.

Yes, it is an annoyance when people put off from doing the dishes. But does scolding the person with that bad habit actually deserve to be replied by being slashed by a parang, though?

Also read: Guy Shares How Malaysians Should Arrange Their Plates After Eating To Help Restaurant Cleaners 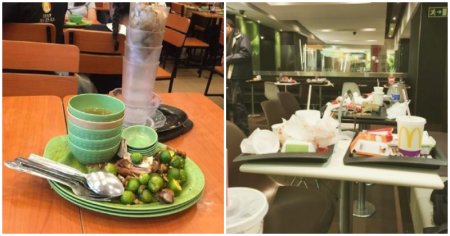