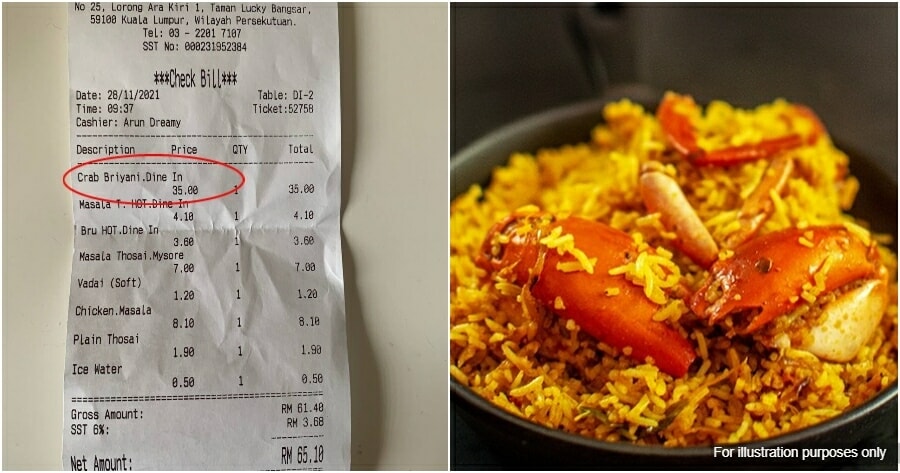 Always remember to double check your bills before paying.

Recently, a tweet went viral of this famous restaurant in Bangsar raising the bill to a 40% increase compared to the display price seen by the customer.

ALWAYS check your bill before paying.

So this happened just now. Ordered crab briyani, waiter asked if we want the crab to be served separately (easier to eat HE CLAIMED) so we said ok. pic.twitter.com/wtU0JHgnAo

Twitter user, Idris Halba went to this restaurant with his wife and ordered a few dishes, but what was stated in the bill was not what they expected.

Ordering the crab briyani, Idris mentioned that the waiter suggested to separate the crab from the briyani dish and they were okay with it.

Once done eating and when they went to pay, the bill came with two separate items – egg briyani and crab curry, when they only ordered crab briyani.

They were once again shocked by the price!

After further discussion, the restaurant came out with a new bill, but to their surprise the crab briyani price was different from what they saw at the display. A RM10 increase was not what they expected after agreeing to the waiter’s advice. 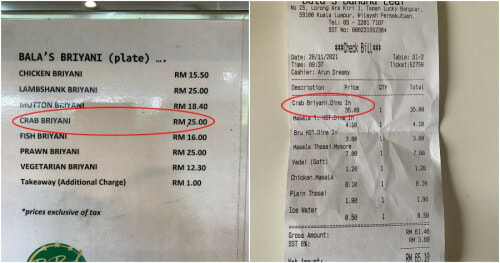 Idris mentioned that his wife even went to double check the display price, only then the lady at the counter admitted that the price has increased.

Adding on to that, the counter lady said since they ordered it separately the crab size would also change, which then affects the price.

As the queue at the counter was piling up, Idris and wife decided to just pay and leave right away. According to him, he has already made an official complaint to KPDNHEP, and ended his Twitter thread with this conclusion:

Moral of the story – don't look at the display price before ordering. Saves you from the high BP of having to clarify 23x for a RM10 difference. 😏

“The crab itself was RM22, so when added to the briyani dish it would of course be more pricier.”

Considering the price increase of nearly every single produce in Malaysia recently, Bala’s Banana Leaf mentioned the crab price has also increased, forcing them to increase the price of the dish too.

They explained that the price of a single crab itself is RM22. Making the dish more pricey to the already expensive dish.

Bala’s Banana Leaf admitted it was indeed their fault and apologised for their mistake. They have now updated the display price so that no further misunderstandings would happen again in the future.

Have you ever faced a similar experience as this? If you have, let us know about it in the comment section down below! 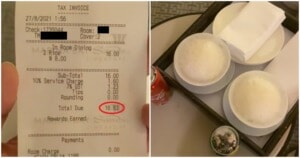