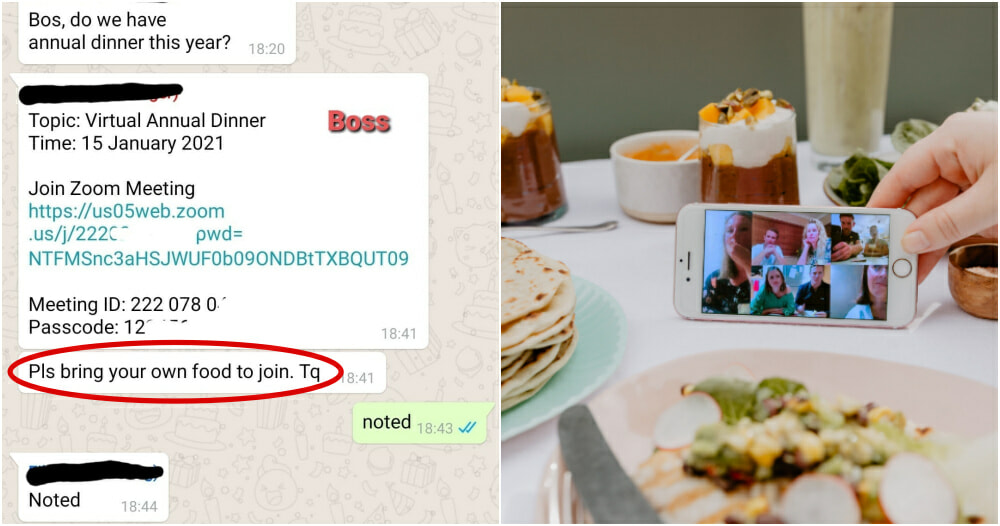 Due to the COVID-19 pandemic, most of us have made ourselves quite comfortable by communicating through virtual calls via Zoom, GoogleMeets and Skype. Whether it’s to attend a meeting, class, or just simply connecting with a friend, the virtual world is now our new reality.

This story has since gone viral after it was posted in a Facebook group, Boom Go Employee, to share text conversation between employees and their boss. As MCO has been implemented again, most social gatherings have been postponed or cancelled. However, this boss was still determined to have their company’s annual dinner. I mean, annual dinner is an annual thing after all…

So, what did the boss say when the staff asked him? 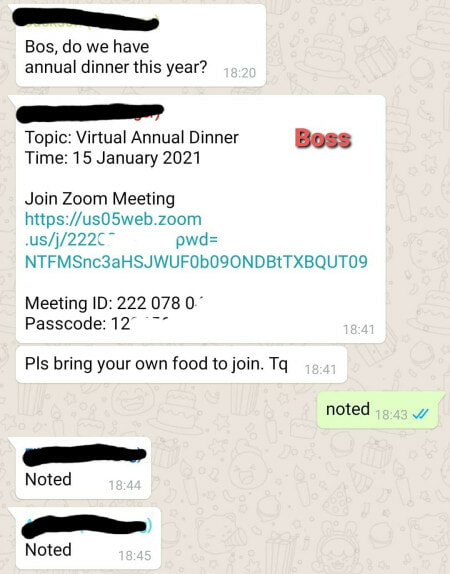 When an employee asked the boss in their company group chat “Do we have an annual dinner this year?” the boss replied with a Zoom call link and said “Please bring your own food to join. Tq.”

The post has since garnered over 3.9k comments and 5.4k shares as at the time of writing.

At first, many netizens thought it was a joke as the idea of sitting in front of your laptop and having your own dinner virtually with your other colleagues seemed like an odd thing to do.

However, turns out, other netizens confirmed in the comment section that it is true and in fact, many other companies are doing the same thing.

“This year we are also having a zoom annual dinner.”

Another netizen commented asking whether the employees can claim for the food from the boss.

One netizen said, “Oh yeah, I can watch the boss drink his expensive wine.” He then jokingly added on to say “Stop by for a virtual year-end bonus.”

We wonder what would be next… virtual company trip via Zoom too? Honestly, we wouldn’t be surprised if that actually happens…

Also Read: Boss Gifts Employees ‘High-Tech Seat Cushion’ But Uses It To Spy On Them Instead 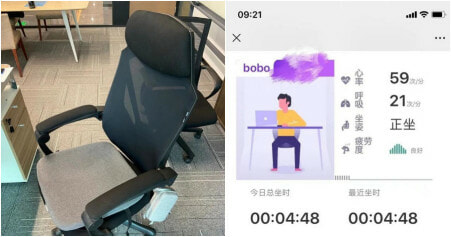