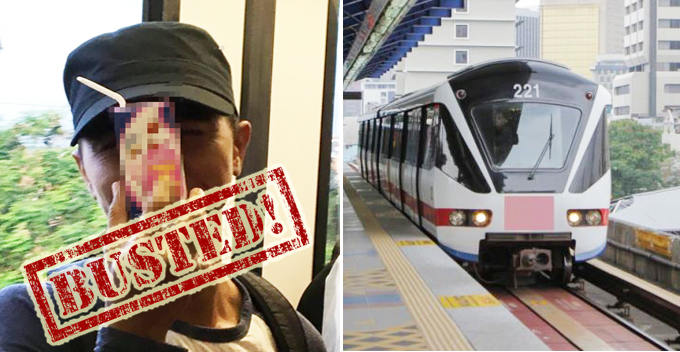 Just days ago, a young lady, Dini was sexually harassed by a guy when she was taking the LRT. The perverted guy blatantly whispered to her: “Fuuuh, can I suck you?” before slipping away at Taman Paramount LRT station.

Dini shared her terrifying story on social media and it has garnered the attention of the public including Prasarana, the company that runs the LRT line.

And in just 5 days, the culprit was caught.

According to the press release shared to us by Prasarana, the auxiliary police has successfully apprehended the suspect who harassed Dina on the LRT Kelana Jaya Line.

“Our auxiliary police team members swung into action upon being informed of the incident on 13 March, when the female passenger, Nur Dini Van Haeren, a 21-year-old student at a private university in the Klang Valley, posted about the incident on her Facebook.”

It was very commendable of the team to have quickly sprung into action. They reached out to the victim for more details and then secured the footage of the suspect from their CCTV.

“We have been on the look out of the suspect the past few days and are pleased to share that he had been successfully apprehended at the Taman Jaya LRT station yesterday.”

They shared with the public that the suspect, who’s aged 37 from Lembah Subang, Selangor had been surrendered to authorities. He was even positively identified by the victim herself.

“Zohari also reminded passengers to remain alert and calm should they encounter any unpleasant situation and promptly alert the staff, the auxiliary police or even nearby passengers for support and assistance.”

The female victim, Dini, praised Prasarana for being efficient and taking the matter very seriously as they kept her updated about the incident.

“My parents and I were very impressed, and of course, grateful. The team was with me throughout the process, after the incident was reported to them. We admire their dedication and their relentless pursuit in apprehending the perpetrator and also their professionalism in handling the matter.”

Kudos to the initiatives taken by the Prasarana team. Passengers especially the ladies can now have a peaceful mind while taking boarding the LRT.

Also read: Malaysian Lady Warns Others Of Pervert Who Sexually Harassed Her Saying “Can I Hisap You?”