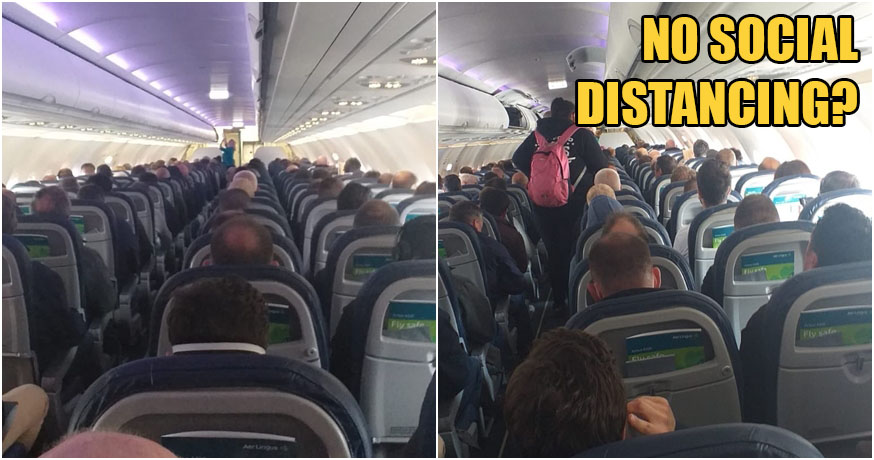 Traveling in 2020 sounds almost like a dirty word during the global Covid-19 pandemic. The merest mention of it is enough to send a shiver down many people’s spines, with talk of how contagious Covid-19 is, and how easily it can spread, especially in public hubs like airports. Despite that, slowly but surely, airlines are gradually beginning to take in passengers again after an almost three-month hiatus.

But for one airline in the UK, it would appear that they have already forgotten many of the ‘new normals’ that society is expected to follow in the wake of Covid-19, after photos of a cabin filled with people surfaced over Twitter recently.

This was the @AerLingus flight from @BELFASTCITY_AIR to @londonheathrow this morning at 8:45. No social distancing taking place – one passenger told me they weren’t given any advice on how to keep themselves safe. More on @BBCevex next @taramillstv @NewsDeclan pic.twitter.com/eeAfcGf23O

According to Kelly Bonner, who uploaded photos of her AerLingus flight from Belfast City to Heathrowe Airport in London, the plane that she boarded was filled with passengers that were seated with no social distancing between one another.

“One passenger even told me that they weren’t given any advice on how to keep themselves safe.” she adds.

In fact, according to another passenger who was on the flight that spoke to The Sun, about 95% of the seats on the flight were occupied, leaving very little room for any social distancing to be enforced.

Northern Ireland’s health minister, Robin Swann, has spoken on the incident, saying that the images were ‘shocking’.

“It was like they were living in a time before Covid-19, completely oblivious of any of the regulations and social distancing and guidance that have been announced and published by our executives here.” he adds.

The Health Minister Robin Swann said he was shocked at images of a packed Aer Lingus flight between Belfast and Heathrow and called for the airline to review its processes. The airline has said it is now putting on an extra flight on each day of operation. Kelly Bonner reports. pic.twitter.com/sS47K4JOc1

Aer Lingus has since come out with a statement on the matter, vowing to launch a probe to investigate the matter after the images went viral online.

“In light of the unexpectedly high loads on the Belfast-London Heathrow service this morning and the level of demand for the route, Aer Lingus is reviewing its processes and procedures applicable to the operation of this service.” they said.

What do you guys think of this entire incident? Do you think that this move comes a little too late?