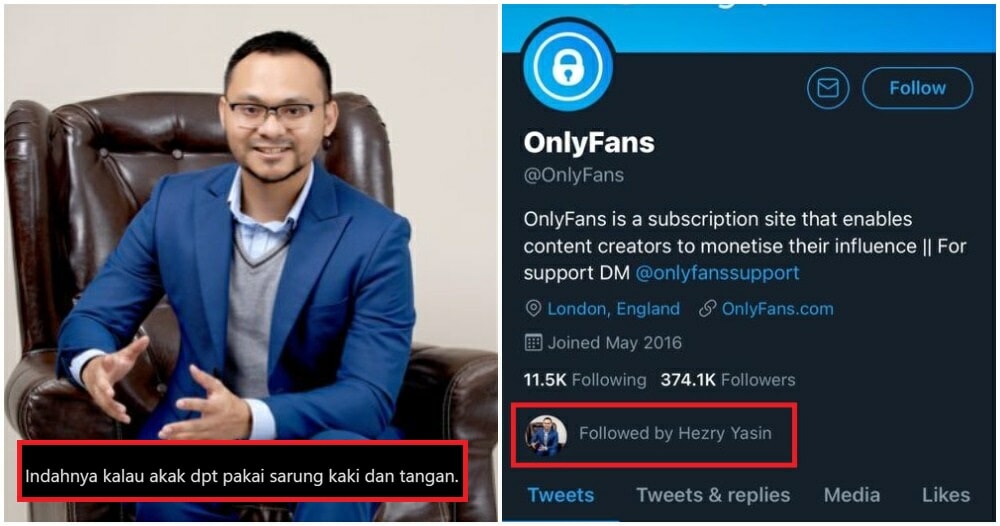 Now, back to the main issue at hand. Hezry Yasin is a PAS Youth member who regularly posts his opinions on Twitter. Now one of those opinions can be deciphered as sexist and a little misogynistic. A woman on Twitter tweeted that for Malaysia to have Prime Minister like Jacinda Arden, the first thing they need to do is not vote for the party PAS.

“Ok kak, I will wait for other reasons to not vote for PAS. However, apologies, I have to mention that a woman’s arms and legs are aurat. This is mentioned in the PAS Tarbiah program.

PAS isn’t just politics, it’s about preaching also. It would be so amazing if you would wear hand gloves and socks from now. Thank you kak.”

To no one’s surprise, his statement met with backlash with most criticising his tone-deaf statement and the party itself. Now, one Twitter user actually went above and beyond with some digging into Hezry’s profile, and guess what was found on his following list?

Netizens were quick to call out his double standards and even said Hezry should stop lecturing on Twitter as everyone knows what OnlyFans are for.

“This is my explanation for how I started following those accounts.”

Responding to these allegations, Hezry Yasin posted a thread on his Twitter at 9.50 am today (19 October) explaining his side of the story. According to him, around 2018 when Only Fans was still new, he and his friend were following the developments of a fitness trainer who mentioned that if you wanted to know more about his posting, you can follow his OnlyFans. That’s when he found out that you need to pay for these subscriptions.

When they found out that they need to pay, they just let it be. He further explained that in OnlyFans there are videos about fitness, indie musicians, comedians, travellers, and he never even realized that Only Fans had sexual content.

Somewhere from 2018 to 2019, he wasn’t active on Twitter thus it still showed that he followed OnlyFans which lead to it becoming viral. He even compared the service to TikTok where it’s originally meant for positive videos but only in Asia, there are videos of people dancing “funnily”.

“There are many people that watch those kind of videos. You guys who scroll OnlyFans, do you just watch sexual videos like what you do on TikTok?”

Hezry ended his post by asking netizens to get their facts right before accusing him. He added that it’s up to everyone if they want to accept his explanation. “To those who insulted me, I’m still considering if I should forgive you or not,” he said.

For now, most netizens don’t seem to be believing his explanation and are continuing to call him out.

Does using Only Fans for fitness seem plausible? What do you think? Let us know in the comments section!

Also read: 41yo M’sian Man Shows Female Co-worker Videos Of Him Having Sex, Says He Has “Powerful” Sex Skills