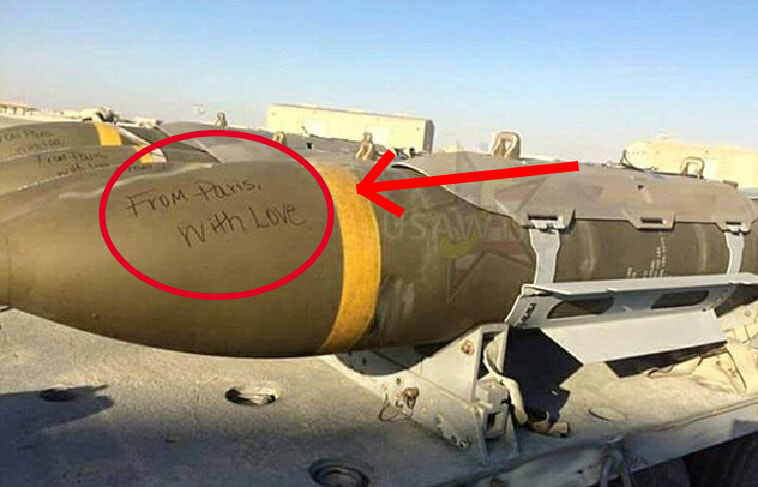 Just one day after ISIS took responsibility for the tragedy that claimed 127 lives, 20 bombs were dropped on Syria in its largest raid on the terrorist group. The bombs targeted ISIS stronghold of Raqqa; specifically their command centre and ammunition storage base.

Following the brutal attacks on Paris, French President Francois Hollande called the attacks an “act of war” and vowed “France will be merciless towards these barbarians.”

Ten fighter jets targeted an ISIS command post, along with an arms and munitions depot, in Raqqa on Sunday evening. The jets also targeted the ISIS terrorist training camp, according to a statement from the French Ministry of Defense. The attack was made in coordination with US forces, French officials said. 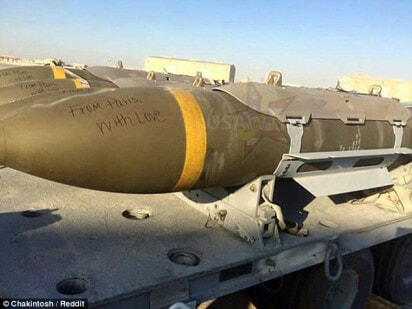 Jdam bombs scrawled with marker as revenge against the paris tragedy

Images of the Hellfire missiles and JDAM Bombs used in the bombing went viral on Facebook as what appeared to be the words “From Paris, With Love” were scrawled on them with black marker. Although the authenticity of these pictures has yet to be confirmed, it’s cool to imagine that the military officials actually did it.

It is speculated that the message in the unverified photographs has apparently been written by members of the U.S. military. Leaving graffiti messages aimed for those targeted by missiles has been a U.S. military tradition since the Second World War.