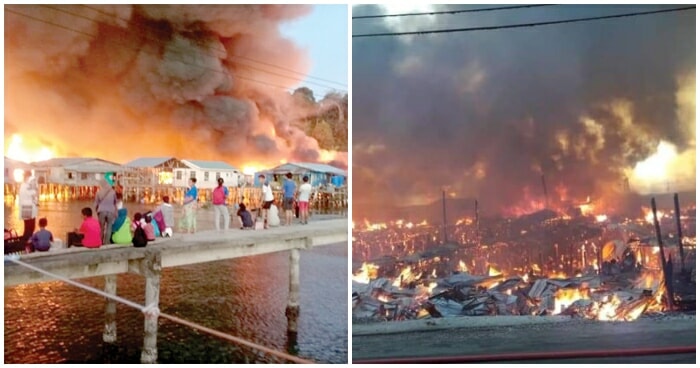 As temperatures soar to new highs, the risk of fire is also on the rise, and the latest to fall victim is the Sabahan town of Sandakan.

On 5am, Sunday morning (17 March), a water village in Sandakan was razed by a vicious fire that tore through more than 30 houses, most of which were made of wood. According to The Star, one of the residents there even suffered burns on his hands and some parts of his body. At the time of writing, firemen are still hard at work putting out the blaze. 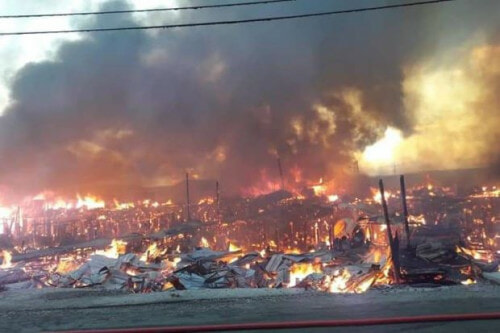 Operations Chief of the Sabah Fire and Rescue Department Khatizah Rahaban said that the fire was brought under control at approximately 6.30am, after 19 firemen in three fire engines were dispatched to the scene. He confirmed that a man had been injured, and that at least 32 houses had been impacted so far.

New Straits Times also reported a statement by one of the residents there, whose house was one of the affected. Mustafa Taib, 48, said that he had just finished his prayers, when he heard screams and saw smoke coming from a distance. Not long after that, he saw his roof catch on fire as well. 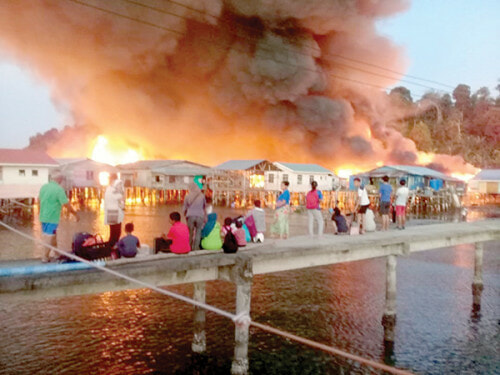 Sadly for Mustafa, this is actually the third fire his house has endured, and this time there was nothing much left for him to recover from the remains save for some documents.

The water village is far from the only place in Malaysia at risk, no thanks to the nationwide heatwave. Malaysian Meteorological Department director-general Alui Bahari has warned that the entire Peninsular Malaysia (except Klang), Sabah and parts of Sarawak between Miri and Bintulu are at extreme risk of fire.

Such is the seriousness of the situation, that the department has already issued code red warnings in certain areas nationwide, according to The Star. Some of these areas are:

Bahari also goes on to reiterate: “Open burning is strictly prohibi­ted as it will be extremely difficult to control fire under the current hot and dry spell.”

At the same time, areas such as Langkawi, northern Kedah, the south-western tip of Penang island, Gerik (Perak), central Pahang and Johor have been hit by a drought. This goes way beyond drinking more water to beat the heat now, guys!

However, there is still a light at the end of the tunnel, as Bahari said the transition period from March 19 to May will bring more rain and thunderstorms, and therefore alleviate some of the searing heat (and our fears!).

It pains us to think of the poor residents of Sandakan who have lost their homes. We truly hope they will be able to rebuild their lives with help from the government and community. To the rest of us, please heed the Meteorological Department’s advice and refrain from open burning. Fingers crossed that we will be feeling cooler temperatures soon!

Also read: MOH Shares 7 Ways to Deal With the Heatwave That’s Expected to Last Until April 2019 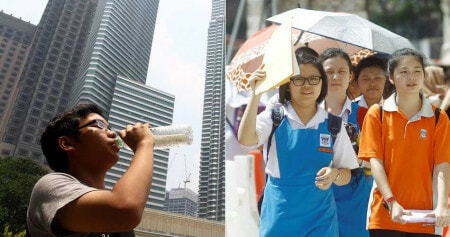