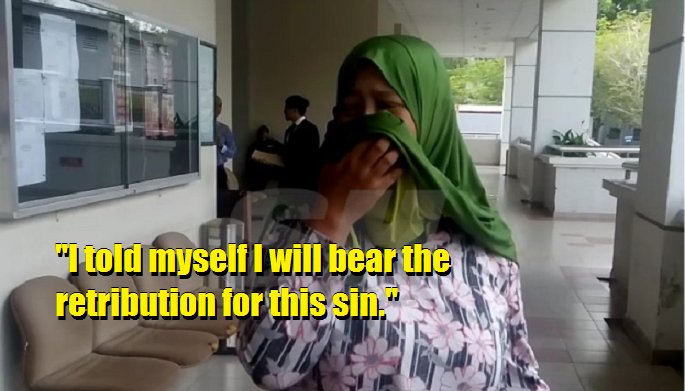 A single mother wept when the Seremban Magistrate’s Court freed her on a good behaviour bond for two years over a theft charge. Her plight tugged at the heartstrings in court as she is a mother who suffers from chronic diabetes, and her 10 year-old daughter has hypoglycemia.

Nor Forina, 38, admitted to stealing items from a supermarket in ‘Seremban 2’ last year, saying that she did it out of poverty and had become desperate.

“I stole the mutton… lemon grass to make rendang… because I could not afford to (buy the items)” she told the court between tears, according to Sinar Harian.

She stole mutton, turmeric leaves, a bottle of shampoo, ointment, undergarments, a pair of pants as well as a tudung (headscarf) totalling to RM262.86. Nor Forina stated that she committed the act knowing full well it was a crime and a sin.

“I did not think of anything else except for my child’s hunger. I told myself that I will bear the retribution for this sin”

“Like the clothes, I just wanted to know how it felt (to wear them). Not only for me, for my daughter as well,” she told reporters later.

She was charged under Section 380 of the Penal Code, and faced a maximum 10-year prison term, fine and whipping.

The single mother earns a living by selling discarded boxes and scrap items. She also received government aid of RM150 a month, but according to her, this was not sufficient to make ends meet.

The single mother told the court that she did apply for Baitumal (welfare aid for Muslims) but was unsuccessful.

This story hurts right in the feels.

It’s hard not to shed a couple of tears knowing the kind of desperation the mother had to sink to, but through such poverty and dire straits she did with a mother’s heart. A mother, in our very own backyard, can hardly make ends meet – it makes you take a step back into perspective when such poverty exists in our own nation.