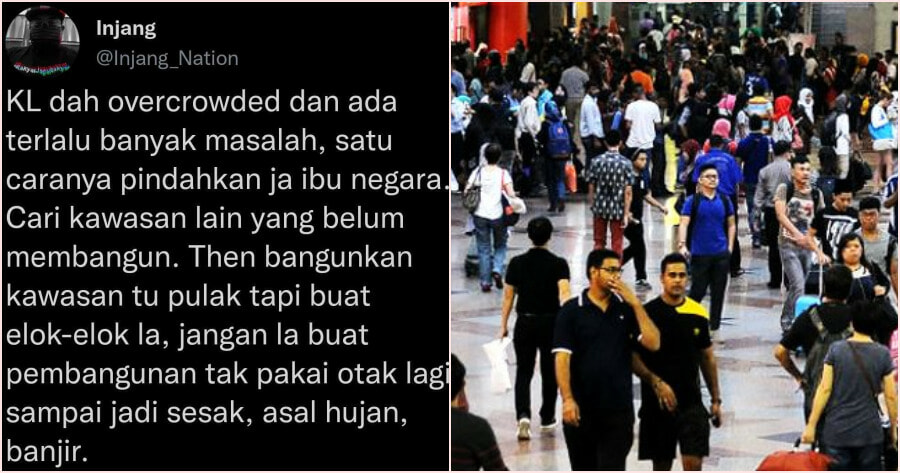 The transition into the endemic phase has meant that people are starting to return to their normal life including having to work in offices and going to school.

This has resulted in worsening traffic congestion; and Malaysia’s defective public transportation system as well as the recent flash floods has further highlighted how bad the situation can get in the capital.

This has prompted netizens to point out how unliveable, Kuala Lumpur really is.

Twitter user @Injang_Nation recently took to the platform to share his thoughts on the situation. In his post, Injang said that a solution to KL’s overcrowding and other problems is to shift the capital city.

“Find a different area which has not been developed. Then develop it properly and not just build infrastructures which do not make sense resulting in overcrowding and floods”, he wrote.

Additionally, Injang said, “In the new capital, developments should be organised and prioritise public transportation as the main mode of transport.”

“But this is currently all talk, so another 100-200 years doesn’t mean it will happen. Especially if the one that’s ruling the country is the same political party.”

Other Malaysians agree with him

His post has amassed plenty of attention as plenty of netizens agreed with him and his suggestion. It currently sits on over 11,000 likes and 5,727 shares at the time of writing.

One netizen pointed out is that the headquarters of most companies are in KL. “Even if they have sub offices in other states, whenever they have meetings or any events, they’d have to go to KL.”

Another pointed out how Indonesia did it before their capital city went down. “Malaysia on the other hand, have to wait for it to go down before planning to move it.”

“Actually we can just concentrate everything to Putrajaya after this. And expand to Cyberjaya, Sepang then Nilai. Would be nearer to the airport”, suggested one user. 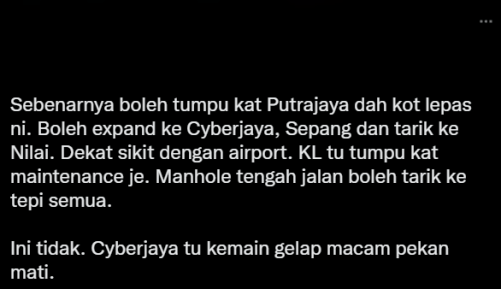 Isn’t that what Putrajaya was intended for?

Meanwhile, a few users highlighted how this was what Putrajaya was made for.

“Putrajaya and Cyberjaya was the plan. 30 years ago.”

Another user said, “The same idea has been done 25 years ago. We call it Putrajaya. But today? It’s filled with highways and no public transport. You’d need a car to go anywhere”.

What do you think of this idea? Is it workable? Let us know in the comments.

Also read: “We need nature based solutions, not just concrete” – M’sian Explains Why KL is Not a Liveable City 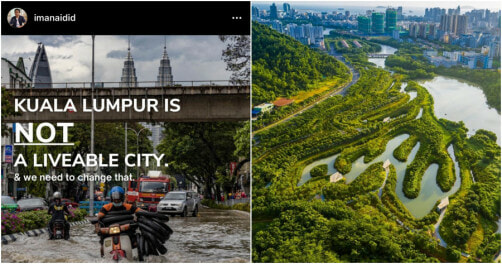