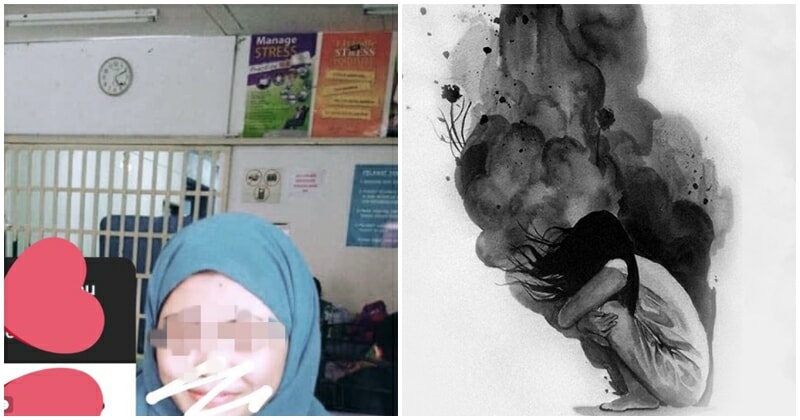 According to the New Straits Times, the number of people at risk of developing mental health problems is increasing daily, with people in the Western Pacific (that’s us) becoming increasingly vulnerable to mental illness.

What’s more shocking is the fact that depression will be one of the largest health problems worldwide by 2020!

With depression ever so rampant in modern Malaysia, many who are diagnosed with mental health problems are often advised to seek psychological and psychiatric help as well as undergo treatments.

We often think that we don’t know anyone with mental health issues, but statistics show that’s not the case.

A netizen shared her experiences becoming a patient in a psychiatric ward, giving exclusive insights on how it feels to suffer from a mental illness. 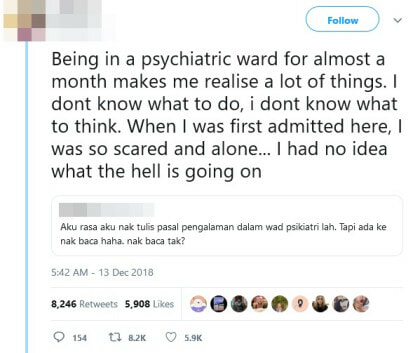 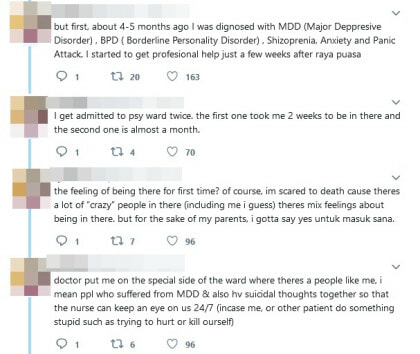 “About 4 -5 months ago I was diagnosed with MDD (Major Depressive Disorder), BPD (Borderline Personality Disorder), Schizophrenia, Anxiety and Panic Attack. I started to get professional help just a few weeks after Raya. I was admitted into the psych ward twice. The first took me 2 weeks the second took up almost a month.”

Sharing her feelings warded there she wrote, “I am scared to death because there were a lot of ‘crazy’ people (including me I guess. I had mixed feelings about being in there, but for the sake of my parents I had to say yes to the treatment.”

The doctor placed her with others who shared the same condition, with a nurse keeping 24-hour surveillance in case a patient would inflict self-harm or worse – commit suicide!

Reliving her experience, she wrote of how some patients were extremely friendly, up to a point of asking to bunk together in bed! 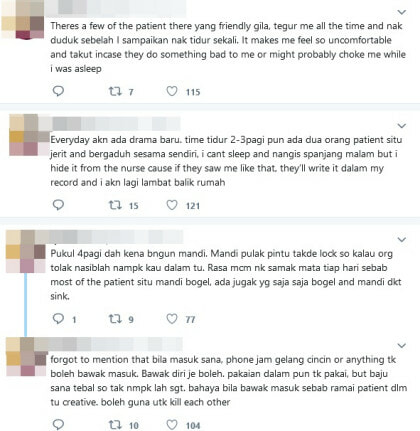 “There will be a new drama every day. Once, around 2-3 am, two patients would quarrel amongst themselves. I couldn’t sleep and cried the whole night. But I had to hide it from the nurses because if they saw me crying, it will be recorded and I will not be able to go back home anytime soon.”

Among her other experiences include seeing others bathing naked as the doors didn’t have locks, as well as a ban on personal belongings that could be used as weapons to hurt themselves or each other. 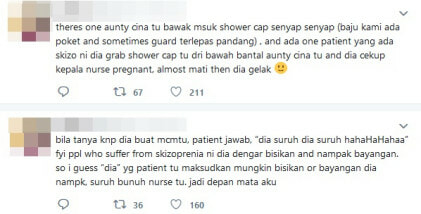 In one of her experiences, she recalled one of the patients smuggling in a shower cap only to be used to assault a nurse at the ward.

She said that it was common for schizophrenic patients to hear voices or see visions to do something they shouldn’t be doing.

According to the netizen, mental illnesses can happen to anyone regardless of their background, and it too can happen to those who are pious.

“One patient cut her own hair. She too suffered from depression like me and tried to commit suicide by locking herself up and setting the room on fire with the aim of suicide by asphyxiation. She wore a veil and is a hafizah. Her parents did not hug her or converse nicely with her and ‘punished’ for her stupid acts. She became very quiet and I could see tears in her eyes. When she was back in her bed, I went over and hugged her.” 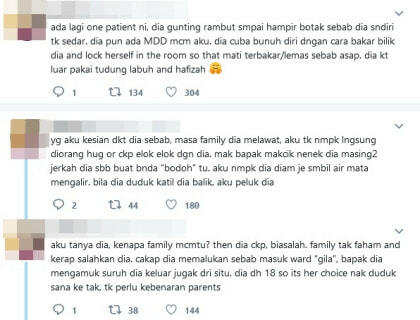 “I asked her, why is your family like that?” She answered that this is normal as they did not understand and blamed her for her actions. She said that they were ashamed at her being admitted into the ‘crazy’ ward.”

The netizen went on to point out that most who suffer from depression, personality disorders or have suicidal thoughts most of the time do not know why. 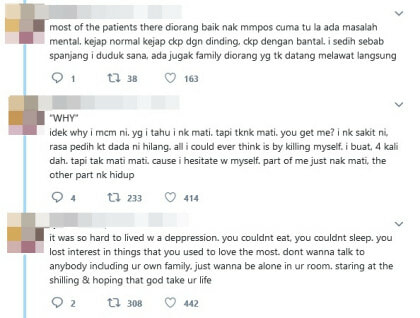 “WHY, I don’t know why I’m like this. One thing I know is I want to die, but I do not what to die. Do you get me? I want to make this pain in my chest go away. All I could ever think of is killing myself. I did try it, 4 times to be exact. But I didn’t die because I was hesitant. One part of me wanted to die, but the other part of me wanted to live. It was so hard to live with depression. You couldn’t eat, you couldn’t sleep. You lose interest in things that you used to love the most.”

She wrote of how she was a recluse, refusing to talk to anyone including her family members,

“You Just wanna be alone in your room. Staring at the ceiling and hoping that God takes your life away.”

It’s time that as Malaysians, we take the opportunity to explore difficult feelings that we face each day and understand that it’s never okay to suffer in silence.

Being listened to in confidence and accepted without prejudice is something that organizations such as Befrienders can help with.

Often being listened to is enough to help someone through a time of distress.  Even just showing that you are there for them and that you know they are going through a distressing time, can in itself be a comfort.

Help someone today and together we can make a difference. 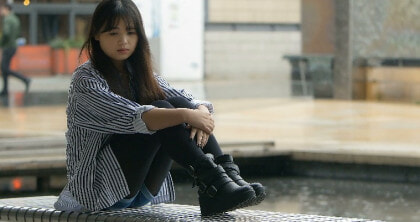