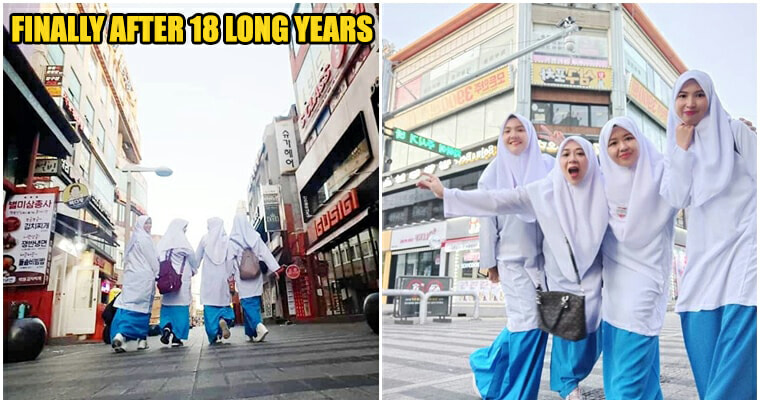 What’s your ideal high school reunion? Naturally, whatever it is that you are thinking of, it must be #rare, #dope, and #nostalgic.

So when this bunch of ladies had their high school reunion in Seoul, South Korea, rocking their OLD SCHOOL UNIFORMS, we had to agree that these ingenious queens are no less than a group of #legends because they’ve set goals for the rest of us. 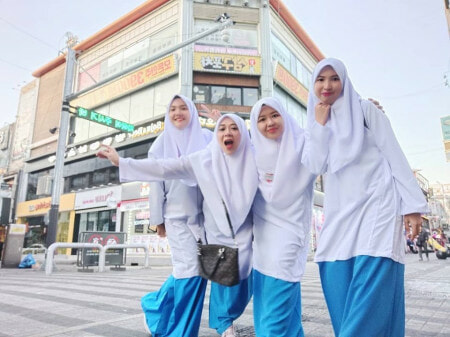 According to Sinar Harian, the pictures of these four ex-students of Sekolah Menengah Jengka Pusat 1 wearing their high school attire in Korea have exploded in social media since last Sunday (Nov 27th) and have been the talk of inspired netizens since.

Marwani Mohamad Marzuki, 34, along with another three friends of the same age, Norihan Jamhari, Fariza Mohamad Nasir and Seri Azlina Mohamed Sani, aspired to preserve and relive their nostalgic memories by wearing their high school uniforms. 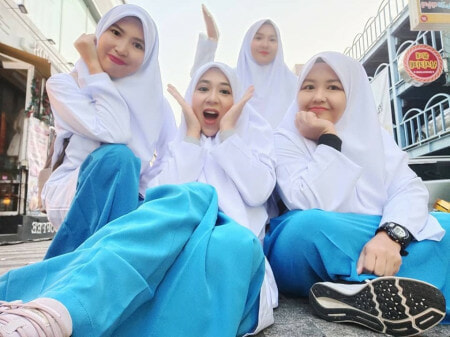 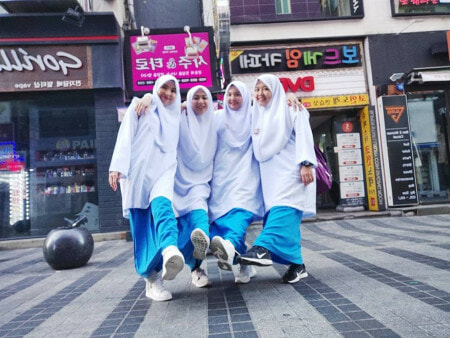 In an interview that she had with Sinar Harian, Marwani said that they had been toying with the idea to travel to Korea since last year, but could only be achieve their dream this year as all of them had time and work constraints.

“The photo went viral because we were wearing our former high school uniforms in popular tourist locations around Gyeonggi-do in Anyang, Seoul, as our background.”

“We studied in the same class when we were in Form Four in 2001, and we never stopped contacting each other after school ended. It’s just that we would rarely be able to meet-up because everyone was busy with each other’s commitments towards their own family and career.” Said Marwani. 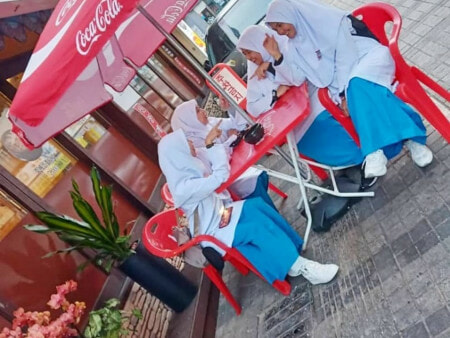 She also exclaimed that they were astonished to find out that the pictures gained so much attention on Facebook. So much so that even popular media started to contact them!

“We are really glad that the idea gained so many compliments from netizens.”

The four went all out for the right reasons

Each of them currently live far away from each other, with Marwani and Seri Azlina working as teachers in Kedah and Pahang respectively while Norihan is working as a nurse in Klang and Fariza as a lawyer in Subang Jaya.

Apparently, they dreamt of travelling abroad 18 years ago, back when they were still living in Felda Jengka and Jerantut Pahang. It was unbelievable for them that they could finally realise that dream now.

Ohyemji! Why are we tearing up over this post?? Where are my homies? Let’s do a reunion! #desperate 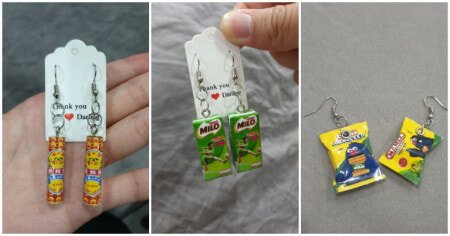