Disclaimer: All images used are for illustration purposes only.

Breaking up is no easy task due to many reasons but this man in Tainan, Taiwan decided to break up with his girlfriend because he felt that she was too clingy and insecure.

According to China Press, the man known only as Wang, told his girlfriend that he wanted to break up and she agreed. Apparently, he felt that her demands of asking him to report about his whereabouts and giving her a goodnight call while saying “I love you” every day was causing him to be mentally and physically exhausted. This is considered clingy?

Hence, in order to bid farewell to their two-year relationship, both of them had agreed to have a final sex session on Sunday, October 22. Wah!

However, things didn’t go according to plan because during their farewell tryst, something went horribly wrong. He was seen running out of his house on Monday morning while holding a cap to cover his private parts, which were obviously in pain. He rushed to a nearby police station to lodge a report about his injured ‘member’.

When the bemused police asked for details, Wang claimed that during their final sex session, his (ex?) girlfriend had caused the injury on purpose. He said that she purposely injured him when she was on top and caused his penis to “swell like a saxophone”. That sounds rather painful!

He accused her of doing it deliberately as he said, “We had used the ‘lotus blossom’ position countless times and there was no mishap so far but coincidentally during the last time I got injured! How is that possible?”

The police then asked Wang how come they still had sex even after they had already broken up, but he claimed that it was his (ex) girlfriend’s idea. Seeing Wang suffering in pain, they advised him to seek medical treatment first before lodging a report since he actually has time on his side to do so, six months to be exact. However, he insisted on making one immediately. Chill lah, bro! Go treat yourself first! 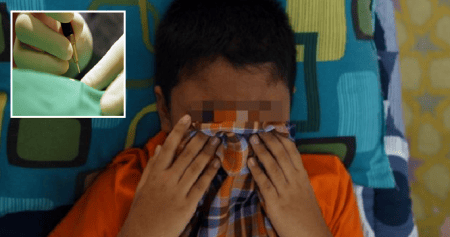