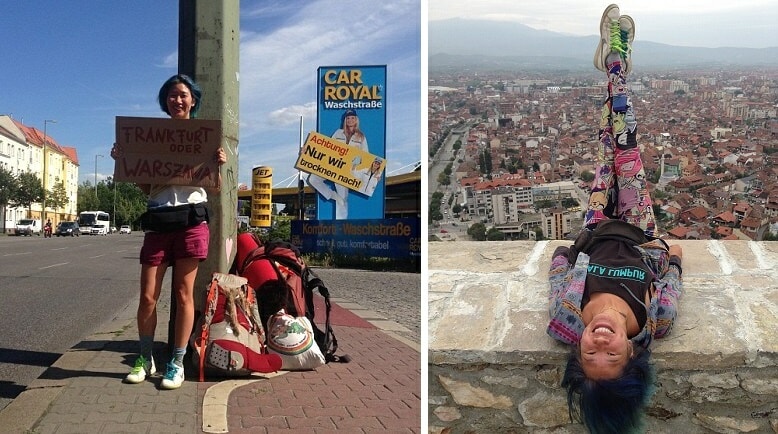 Hitchhiking is daunting as is, yet one daring Malaysian woman managed to carve her way through 22 countries, travelling from Stockholm with a bare U$200 (RM800) to her name and ending up home in Kuala Lumpur a little over a year later!

Now that is a story to tell for years to come and would probably be the YOLOest of all YOLO moments in history. Petrina Thong, a freelance scriptwriter, described her adventure as a “self challenge”. And it must’ve been geographical-wise as well!

Petrina’s route snaked from Sweden as her starting point, to Denmark, Germany, Poland, and across the Baltics. She then travelled through Albania, Kosovo, Bulgaria and then to Turkey. From Turkey onwards, she journeyed across Iran, Pakistan, India, Thailand, then finally, home-sweet-home in Malaysia. She added that once she traversed past Europe and into the Middle East and Asia, she had a lot of concerned strangers asking her about her solo travels.

‘I was constantly questioned, “Why are you alone? Where is your husband/brother/boyfriend/parents?” “Aren’t you scared?” “Don’t you get lonely?”‘ the young woman said. ‘In Asia, it’s not common for people to solo travel, especially women.’

Yet, Petrina defied all odds and completed her epic year of travelling,  ‘I expected it to be an insanely difficult journey, but in retrospect, it doesn’t seem all that bad,’ she said.

‘Of course I had many moments of wondering what the hell I’m doing and questioning why I am putting myself through such ordeals, but I have comforting new outlook on the world.’ She explained how she only had “a budget of $200 (RM800)” to spare. She traced back the beginning of the journey to the Daily Mail, recalling how she flew to Sweden “with the intention of experiencing hitchhiking, simply because I couldn’t imagine doing it,”

‘I figured I might as well try it out, thinking I would travel about three to six months, depending on how long I can survive with a budget of $200.’

Her $200 (RM800) lasted her a mere three months, and after that she was out on her own and decided on a fresh new challenge: to travel with no money and absolutely no plans. How? Apparently, she would just stand by the road and do the usual hitchhiker pose, and follow where her path led her to.

‘I would stand by the road, thumb out, wherever the car went, I’d go. Only upon arrival I’d allow the Universe to reveal where I would be sleeping and eating,’ she explained. For all the bohemian vibe, food and a place to stay was no easy feat to come by. Petrina recalled how she’d scour for her meal by ‘digging out food from the trash, hanging around eateries and pouncing on people’s leftovers, asking markets for fruits that can’t be sold anymore. ‘

‘Once evening came, I’d look for places to camp or get invited home by randoms.’

Her hitchhiking experience was no glamorous red-carpet, but Petrina loudly advocates for other single women to travel and hitchhike along, citing that her travels have allowed her to gleam valueble life lessons.

‘My greatest lesson is that the world or the unknown isn’t as scary as you make it out to be. People everywhere are unbelievably kind and willing to help. Now I know that even if I’m lost in a country where I can’t speak the language and I have no money, I will still be alright.’ Ahh, it’s little moments like this where counting on a stranger’s kindness restores our faith in humanity!