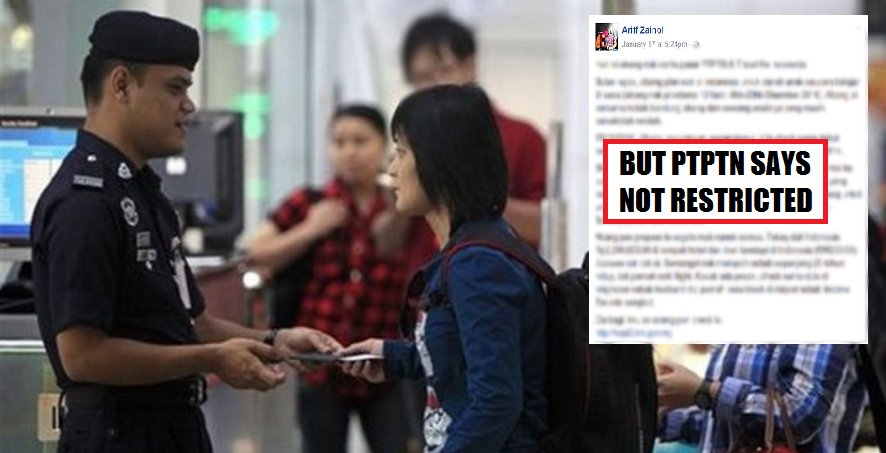 One debt that many Malaysian youths have today is their PTPTN loan. And many of these loan borrowers tend delay payments. Hence, many of these people get blacklisted.

Here is the story of Ariff Zainol who wasn’t blacklisted but he suddenly got caught up in the whole PTPTN issue.

“Last month, I planned to go to Indonesia to visit my nephew who was studying there. I was going to go with my sister and her child who is still in primary school.”

“When checked, the officer told me that my name is cleared and not blacklisted to go overseas.”

With enthusiasm, Ariff went on to make his passport which costs RM200 and then spent another RM800 more on his flight ticket.

He went to the money exchange and got IDR 2,200,000 (RM 731), and booked a hotel and bought train tickets for his travels in Indonesia too.

“I was filled with gusto because in 25 years of my life, I had never went on a flight.”

But he wanted to be extra careful.

“My sister warned me before, check my name at the immigration department because her husband was once blocked at the airport due to income tax issues.”

“She passed me the link and so I checked.”

“The result showed ‘No Restriction’. And so I got even more excited to go to Indonesia. But I was surprised by the ‘No Restriction’ because many of my friends told me that if you have (unpaid) debts with PTPTN, you can’t go overseas.” 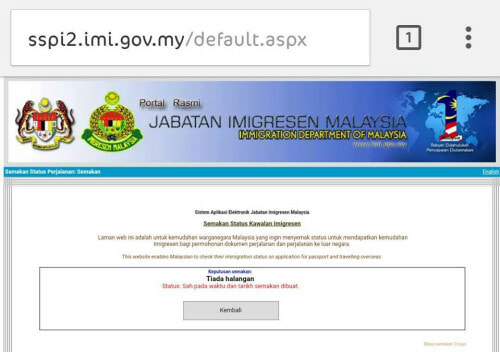 “Due to my enthusiasm to go on a holiday, I forgot one thing: I did not check whether I really can go overseas or not at the PTPTN department.”

“Once again, the results showed ‘No Restriction’. Then I thought that perhaps because my debt was not too much, PTPTN did not block me. Perhaps there was a certain minimum limit for them to block.”

“08/12/2016: I arrived at the airport at 4.30PM because my flight is at 7PM. At about 6PM, I’ve said my goodbyes and macho-ly walked towards the ‘International Departure’ and this is where the episode of sorrow, sadness, frustration, resentment, anger and all that started.”

“I was stuck there after the immigration officer told me that my name was blacklisted from leaving the country! You have no idea how my heart collapsed after hearing the officer say those words.”

But having checked his status online several times before this where he was declared cleared, he questioned why was he being restricted today. The officer replied,

At that time it was already 6.30PM and his flight was leaving in half an hour. The officer told Ariff to call up the PTPTN department to settle this debt.”

“The officer gave me a telephone number of a PTPTN officer. She was in the middle of her holiday but she was willing to check on my debt. Thank you miss for your kindness.”

“She said that I do have an unpaid debt with PTPTN and I must clear it through online banking if I was to clear my name. But she wasn’t sure if I can be cleared immediately after making the payment.”

And so, Ariff didn’t get to go on his 12-day trip to Indonesia. He wanted to remind everyone to always ensure if you’re clear to go overseas or not and to pay back all your debts.

“Do not assume that you are not blacklisted even though you did not receive any notice from PTPTN. If you have never paid back or you are late in payments, you are definitely blacklisted.”

“Settle all your debts first before making any sort of plans to go overseas.”

“I’ve settled all my unpaid debts using my second EPF account. If you have any unsettled debts then it is best to use that second account.”

“Don’t be like me. To regret is also useless.”

Somehow, although we have been paying back our debt on time or even finished paying it off, there’s been cases that the PTPTN department has blacklisted some people by mistake too.

Or perhaps their systems are just slow to update. Either way, it is best not to owe people any money in the first place. If you have a loan then pay it on time!

You can check your status online here.