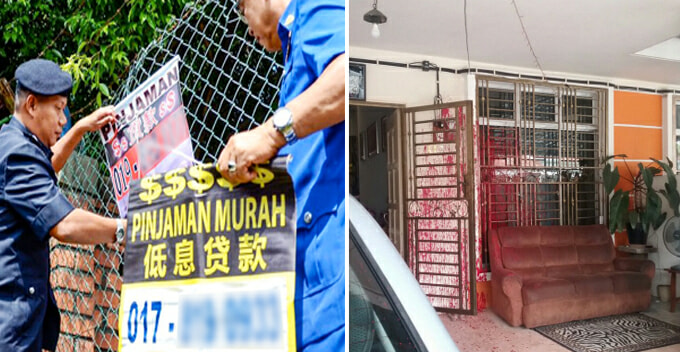 Splashing paint at money borrower’s house is the signature move of loan sharks. However, this Malaysian family didn’t borrow any money and still got their house splashed.

According to Mohd Ariffin Ayob, 46, his house has been targetted by loan sharks despite none of his family members ever borrowed money from them.

The loan sharks started by pasting a threatening note on Ariffin’s car that was parked in the garage on December 2. In the note, it was written the borrower’s name and a phone number which he has has never seen before.

“Almost every week, a car will stop, drive slowly and cruise around the front of my house after the incident, until Dec 29 when the paint incident occurred,” he said.

Ariffin’s wife heard a splashing sound and rushed out to have a look. To her surprise, she saw something being splattered around. To her horror, the house including their car were covered in red paint. 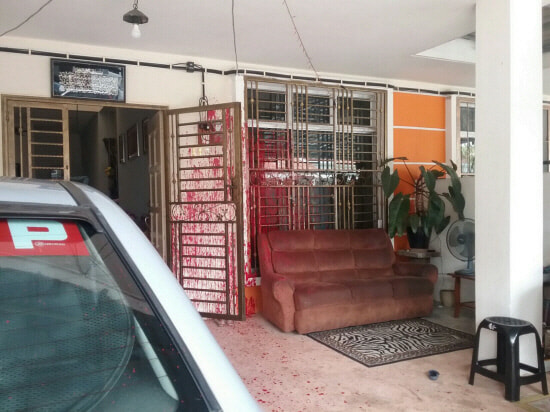 “My wife, who was alone in the house minding some children, immediately telephoned me and I rushed home,” said Ariffin.

After the incident, Ariffin’s family became restless because every time whenever he heard noises, he would rush out to inspect his house. His wife also started seeing paint splatters when she’s outside the house.

“My daughter is emotionally disturbed, what more during the incident she was sitting for a final university examination. And more embarassing to the whole family, the incident took place several weeks after I held a wedding reception for my son, the younger of the siblings. It became the talk of the neighbourhood that we allegedly borrowed from Ah Long to fund the event,” he said

“I did contact the borrower using the telephone number on the note after receiving the note. I messaged and Whatsapped but did not get any response. I assumed the actual debtor wanted to wash his hands off and leave us at the mercy of the Ah Long. So, I disseminated his Whatsapp profile picture,” added Ariffin.

Several days after he performed a solat hajat, a neighbour in his housing estate identified the borrower’s identity which Ariffin has since submitted to the police.

He met up with the borrower at Seremban District Police headquarters in an attempt to solve the problem.

“The borrower did not want to own up he had debts with Ah Long. We checked his cellphone and found threatening messages from Ah Long, and we also found out how much he borrowed,” Ariffin said.

It was later found out that Ariffin’s house number is same as the borrower’s one albeit different housing estate. After the confusion has been cleared, Ariffin hoped that the loan sharks can stop harassing his family.

“I had to fork out RM6,000 to get rid of the paint on the front portion of my house, car and shoes. I had to throw away the clothes hung out to dry as they were splattered with paint. I was also forced to install closed circuit television for security. But I only hope this incident will end,” he added.

This confusion has definitely cost Ariffin a lot of unnecessary problems. Hopefully the loan sharks will leave his family alone after this.