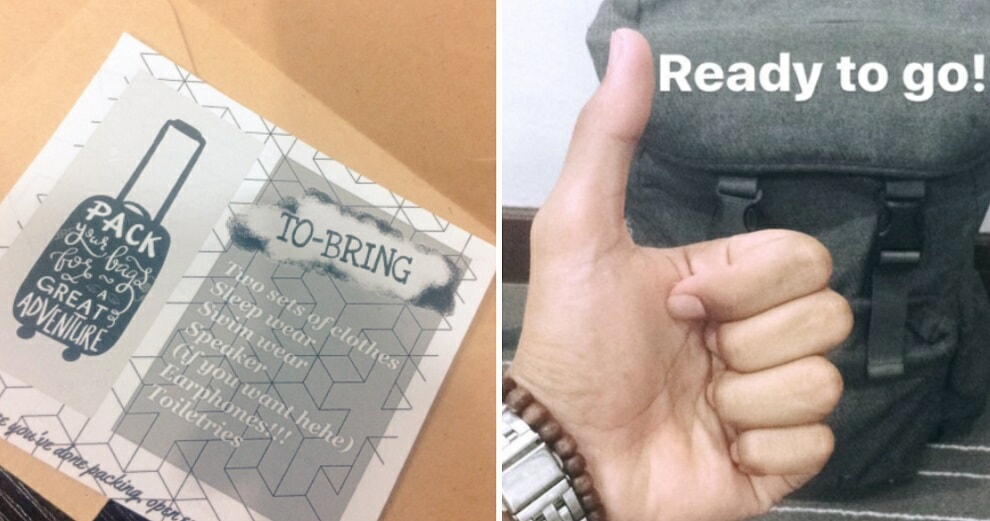 Anyone would do anything to see their significant others happy, which is why what this girl did for her boyfriend’s 19th birthday was just too adorable!

A Twitter user named Syamim was met with a pleasant surprise when an event reminder his girlfriend added in his phone suddenly went off at 12am on his 19th birthday. 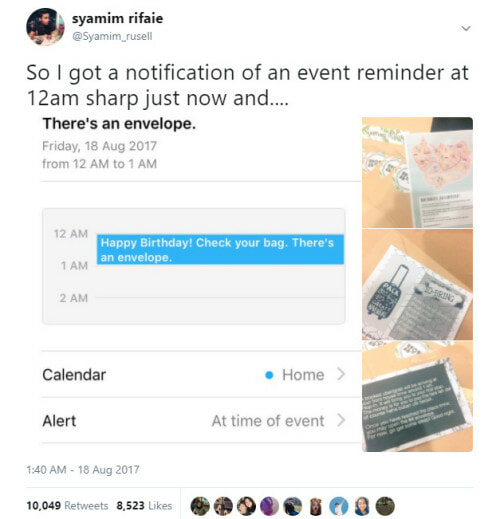 The reminder told him that there was an envelope he needed to open. It turned out that the envelope contained instructions and a list of things to pack for him to bring along on his journey later in the morning. 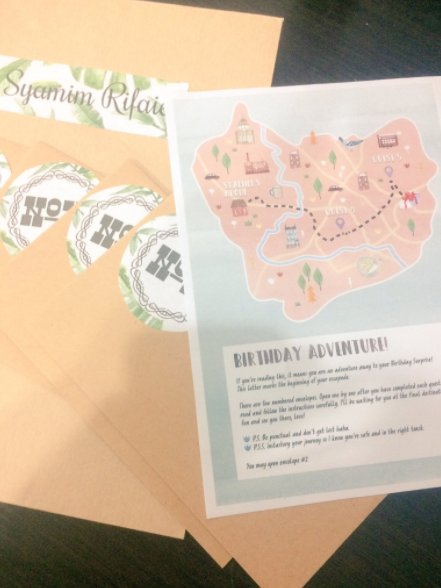 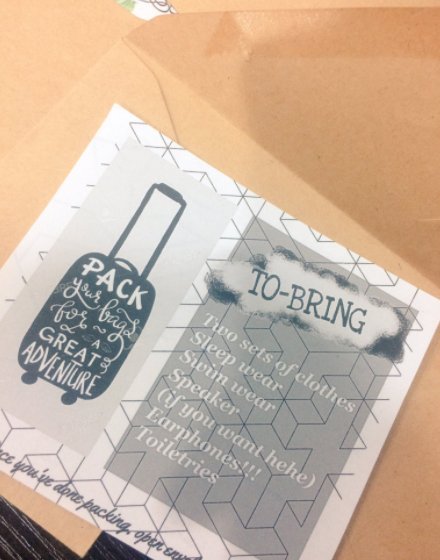 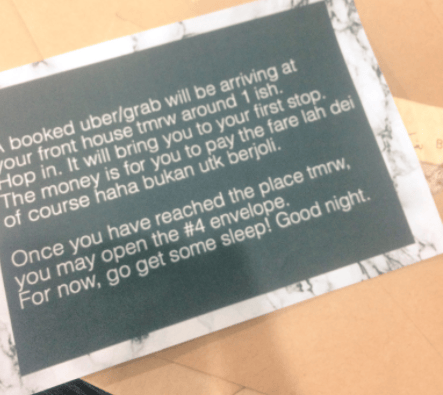 Intrigued by this, he decided to follow the instructions and packed everything that was listed in the letter, which also instructed him to open an envelope with the number 4 written on it before setting out on his journey.

Syamim opened the envelope, which contained another letter instructing him to go to the Alam Megah LRT station and told him to download a QR scanner before opening the next envelope. Wah, this is next-level! 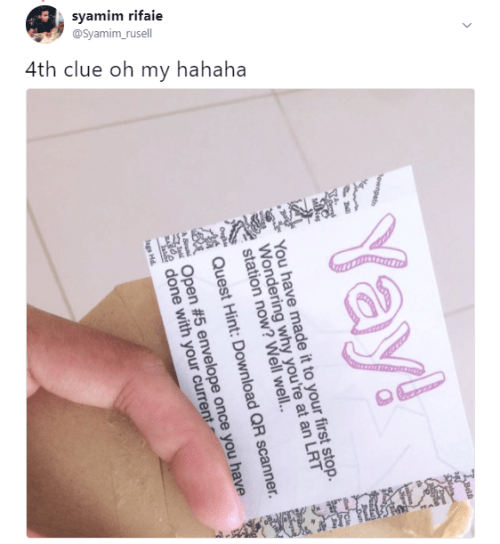 He then proceeded to scan the QR code in the next envelope, as instructed, and found his next destination; Lembah Subang station!

Once he arrived at the station, he opened his next envelope that revealed his next destination encrypted in Atbash cipher! Walau! 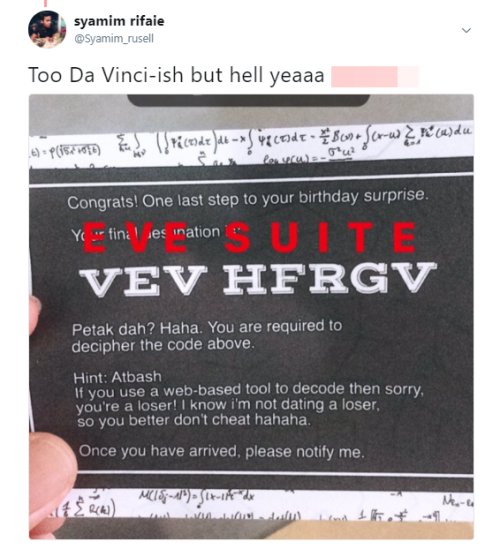 When Syamim finally managed to decode it, the message revealed his next destination on his quest; Eve Suite, which he then realised was written on a sign right in front of him the entire time!

After making his way to Eve Suite, his girlfriend was there to greet him, remaining secretive as she led him to a room. Syamim was shocked to see the room filled with balloons, complete with a PlayStation 4, and a giant present! Aww! 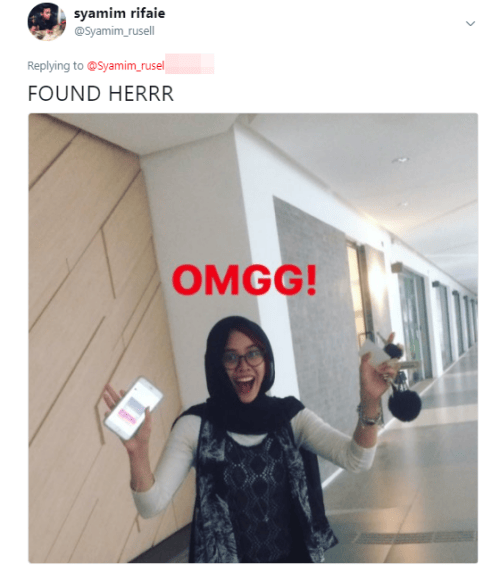 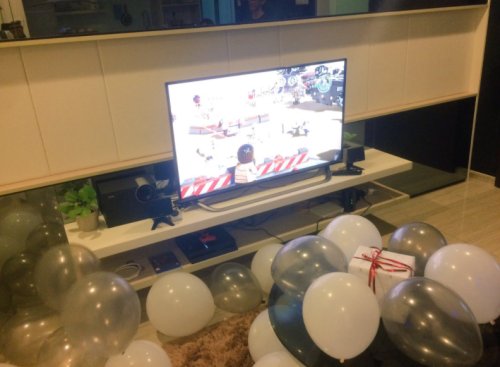 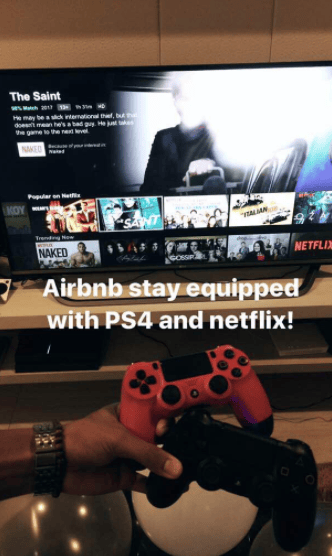 His girlfriend was clearly having a lot of fun with this, because the present was packed with three layers of gifts, the first one literally containing a jar filled with nothing.

She even prepared a custom playlist for him so he could listen to it throughout his journey. This girl’s a keeper! 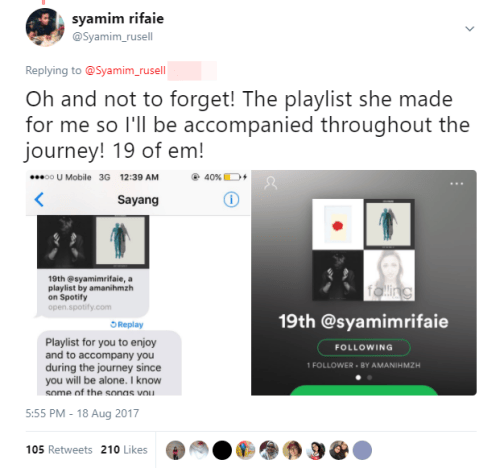 The surprise didn’t stop there either, because his friends came to the apartment shortly after he arrived to surprise him!

Syamim ended his epic thread by posting a heartfelt thank you letter to his awesome girlfriend. 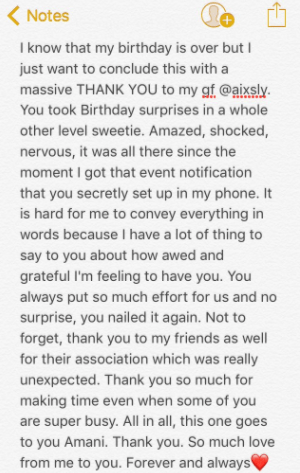 Sorry, we’ve got something in our eye!

We’re definitely rooting for this adorable couple. We can totally feel the love between these two and wish them all the best in their future. <3

Now, we’re wondering how he’s going to top this once his girlfriend’s birthday comes around! 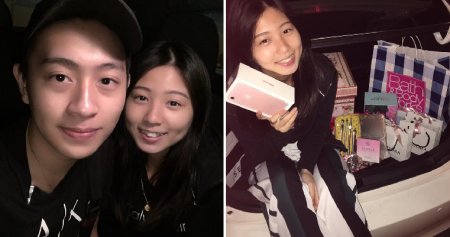