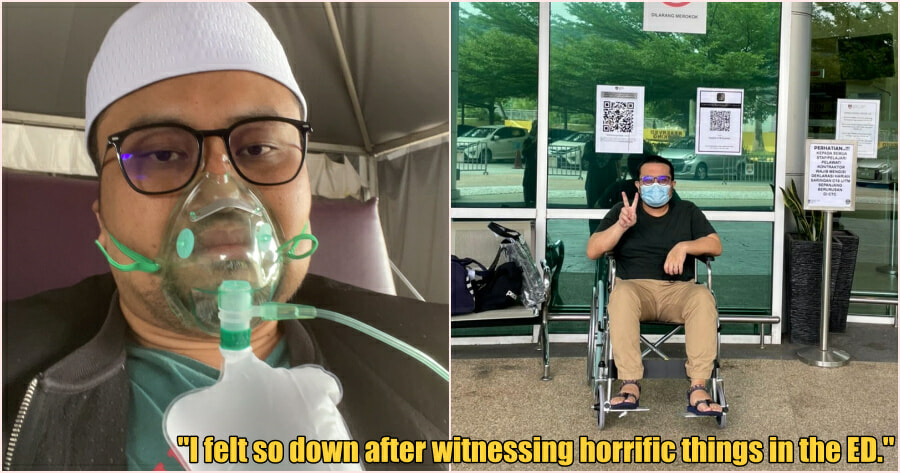 “I had to be given the highest oxygen rate which was so hot and felt as if someone had poured a cup of hot tea directly into my nose.”

Even though the standard operating procedures (SOPs) have been slightly relaxed, it is unsurprising to see massive crowds gathered at popular locations as if Covid-19 is no longer in existence.

Although many of us may have been blessed to have never been infected or have someone close to us infected, it does not give us an excuse to not take the SOPs seriously as being infected with the virus is no joking matter.

Recently, a LinkedIn post by a Malaysian man named Sharullizuannizam Salehuddin (Nizam) detailed how he is still surviving after being classified as a Stage Five Covid-19 patient. In his post, Nizam said, “Praise to God, I still survive after 33 days of being warded due to Covid-19 Stage Five. Now in the process of recovering. Thanks for your prayers.” 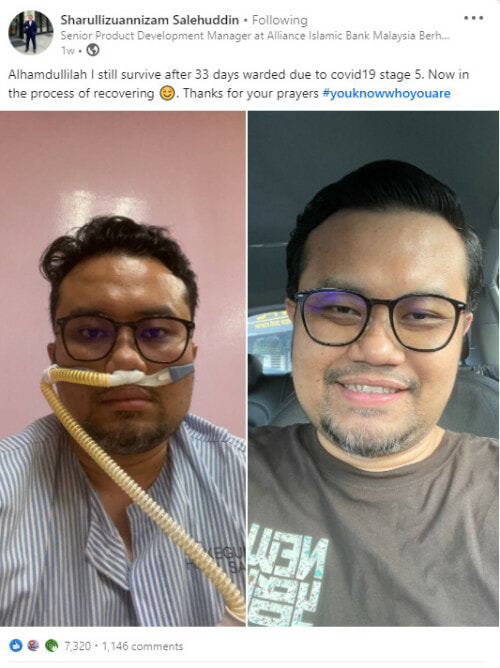 The post which has garnered plenty of attention currently sits on over 7,000 likes and more than 1,000 comments with many praying for Nizam’s speedy recovery as well as comments by some who shared their similar experiences in facing the virus.

One user asked the question that was on everyone’s minds-had Nizam received the vaccine prior to being infected?

Nizam replied to the user and said, “I had yet to receive the vaccine at that point.” The user also asked if Nizam was immediately classified as a Stage 5 patient and if he still had an appetite despite being warded for 33 days.

“I was not immediately classified as Stage 5 and it started out as Stage 3. Food-wise I was okay as I never really had any issues with loss of appetite even from the first day of being infected with Covid-19.” 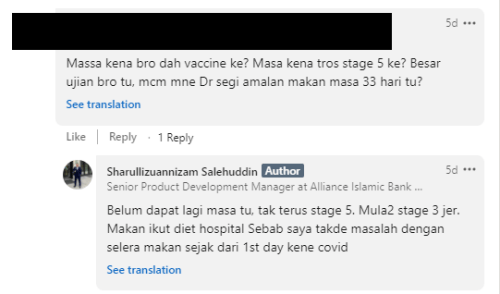 WORLD OF BUZZ contacted Nizam to get his first-hand experience in facing the virus at the most serious stage. Nizam passed on a link to a post on his Facebook where he journaled his experience of being infected.

In the post titled “Notes Of A Covid-19 Stage 5 Patient” published 0n 27 July, Nizam who is 37-years-old and resides in Batu Caves, Selangor prefaces it,

“I have not written a long essay like this for a long time. Here, I would like to share with you all of my journey with being infected with the Covid 19 virus. This is because I have only just gathered the strength to share my story upon the request of many of my friends.” 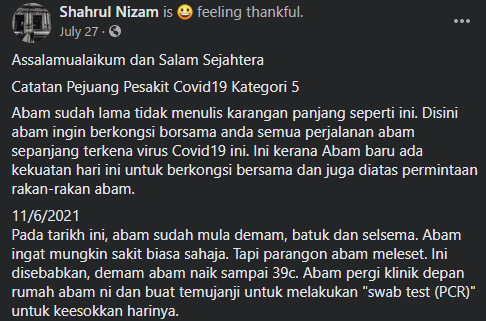 In the post, he explains that on 11 June he had started getting a fever, cough and cold. “I thought it was just normal pain but my fever rose to 39 degrees Celsius. I then went to the clinic to book an appointment to do a PCR swab test for the next day.”

“I hoped that the result would be negative. The symptoms I was having were identical to the symptoms of Dengue which I experienced 15 years ago.”

Unfortunately, a positive test result was recorded on 13 June. Nizam said, “after I received the call with the news, I couldn’t feel anything. All I did was tell my wife to also do a test. The result was also positive but she had no symptoms.”

On 15 June, he said that he received a call from the Gombak District Health Office and after answering some questions, they informed him that he and his wife will be placed at the Malaysia Agriculture Expo Park (MAEPS) quarantine centre. He then made the necessary calls to his residential area and workplace and thankfully, they were extremely supportive of him. 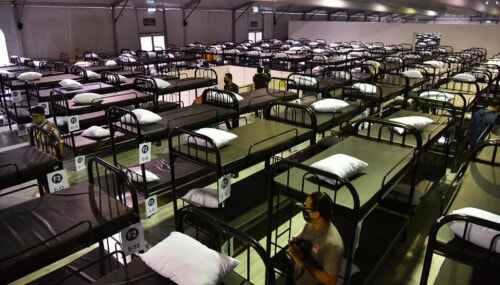 Later in the afternoon, Nizam mentioned that he received a call from the ambulance that would take them to MAEPS. “At that point, I was not feeling well as the fever had yet to subside.

The ambulance arrived at 9pm and had three other patients in it excluding them. After having registered and performing a health check, he was separated from his wife and was taken to the Yellow Zone for further examination because at that time he had a very hot fever.

“The doctors and nurses examined me from the ends of my hair all the way to the ends of my feet and I was also given respiratory assistance (‘Nasal Cannula 1 liter’).”

He continued, “After spending the night in the Red Zone, I was transferred to the Yellow Zone. The surrounding in the Yellow Zone was identical to a hospital ward. I was still using the breathing aid provided.”

On 19 June, when the nurses took note of his vital signs, Nizam said that he was surprised to find out that his oxygen has dropped down to 73%. “But at that time, I didn’t feel nauseous or chest pain. The situation I went through was called ‘Happy Hypoxia’.”

Nizam said, “I was pushed to the MAEPS Acute Resuscitation And Isolation Area (Maria) for better respiratory assistance, as I had not succeeded in raising my oxygen levels up to 97% like everyone else. I was stationed there until the night time but my oxygen remained at 94% despite being given high respiratory assistance. The doctor then decided to send me to the Sungai Buloh Hospital (HSB).” 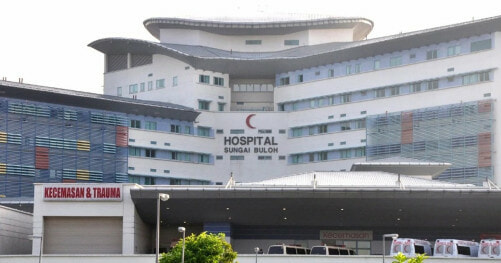 Move to HSB due to critical condition

There, he was admitted to the Emergency and Trauma Department (ED) for incubation. Nizam said that normally patients are only placed in the ED temporarily. But he was there for five days.

“I was placed in an area and covered with plastic alongside another Covid patient. It was very hot because the hospital had made adjustments to ensure that the virus can’t travel through the air,” he recounted.

He said that he was provided with the highest oxygen rate there which was so hot that it felt as if someone had poured a cup of hot tea directly into his nose. Nizam also noted that whilst in the ED, he witnessed a lot of disturbing events such as a patient who died whilst they were receiving CPR, a patient who had to be put to sleep and much more.

“At that point I just accepted whatever fate was waiting for me and had bouts of depression after witnessing all the horrific things.”

On 24 June, he said that he was moved to the normal ward. “Thank God I managed to get through the difficult phase in ED. But in the regular ward, I was still on breathing assistance 24/7  as my lungs were inflamed and had blood clots.”

“Various medicines were given and many blood tests were done until there were bruises on my hands but I tried to remain positive. I was there for four days until I was confirmed to be free from Covid-19,” said Nizam. 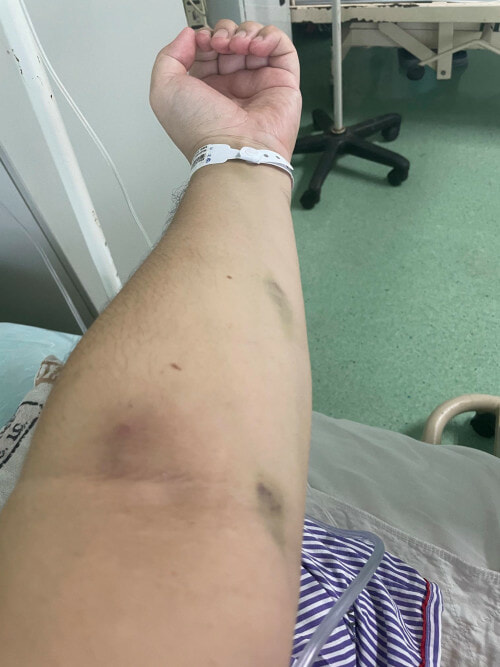 He was then transferred to the Multi-Disciplinary Short Stay Unit (MDSU) at HSB after being officially “Offtagged Covid-19.” However, he was still subject to further observation as he was confirmed to have certain lung and heart complications.

At MDSU, he was taught breathing and light movement exercises so that his muscles could move properly after having laid in bed for almost a month.

On 9 July, he was informed that he would be transferred to UITM’s Sungai Buloh Hospital for rehabilitation. “The situation there was a lot less hectic than HSB. Whilst I was there, I was taught more about recovery exercises and had to go through a physio exam before I was finally able to leave. Thankfully, I managed it and was allowed to leave without needing any respiratory assistance at home.”

“That’s the story of my journey as a former Covid-19 Stage 5 patient. I would like to thank my wife, family, friends and coworkers who never stopped offering words of encouragement and praying for my health as well the health frontliners who took care of me in hospital.”

He ended his post by saying that his struggle is still ongoing and urged Malaysians to pray for his health. He also said, “If I hear someone who says that Covid-19 is merely an agenda of the Jews, I will slap them until they turn mute.” 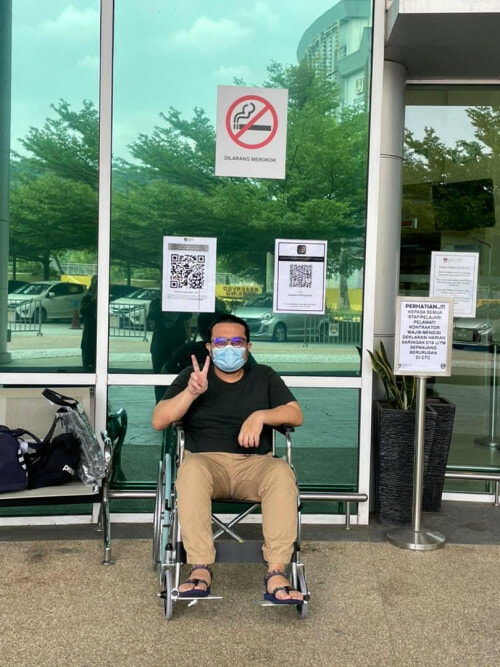 Speaking to WORLD OF BUZZ, Nizam said that he is still on medical leave to recover from the after-effects of Covid-19. He explained that he still has chest pain, bouts of coughing and feels fatigued.

“Currently I am referring to Gleneagles Hospital to follow up on my current condition. Their first diagnosis is that I have ‘Pulmonary Fibrosis’ due to effects from Covid-19, but they need to do several tests to confirm the disease. I hope the trajectory by the specialist will be better for me,” he added.

Let’s not forget how dangerous this virus really is, abide by the SOPs and pray for the speedy recovery and good health of Nizam, and every other Covid-19 patient.

Also read: Have M’sians Forgotten That Covid-19 Still Exists? The Crowds Seem To Think So 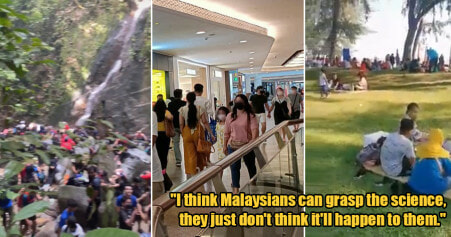