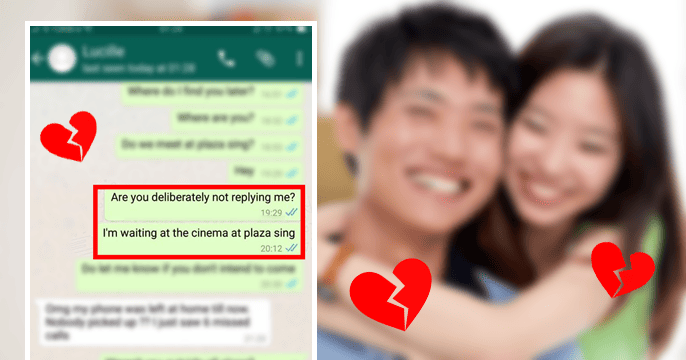 Valentine’s Day is definitely a time when love blossoms… or hearts get broken.

But no matter how terrible the situation was, no one probably went through something as bad as this guy from Singapore did.

Aeris Kaelia shared the horrible experience her good friend suffered during this year’s Vday. Not only was he stood up, but he also had his feelings played by a terrible girl.

What happened was, the girl Lucille and Jack* had both planned a date together on the special day. Lucille had even suggested the timing and location to meet up, which would mean that she was aware of what was going on. 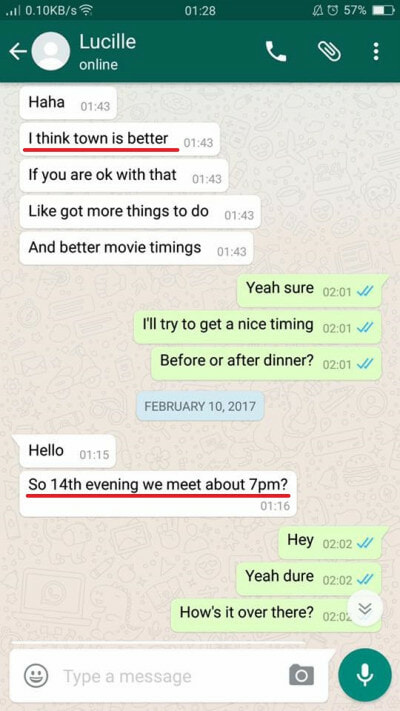 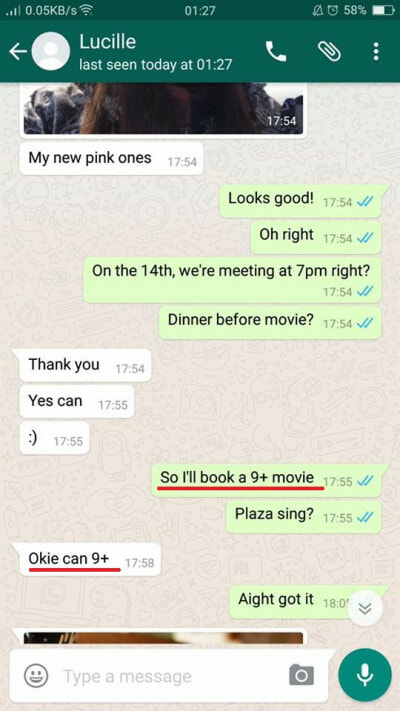 The conversation between Lucille and Jack clearly showed that she too was in on the plan. She seemed onz for the outing until… she bailed on the poor guy!

On the day itself, they were still chatting with each other until 4PM where Lucille had agreed to meet Jack after her class has ended. 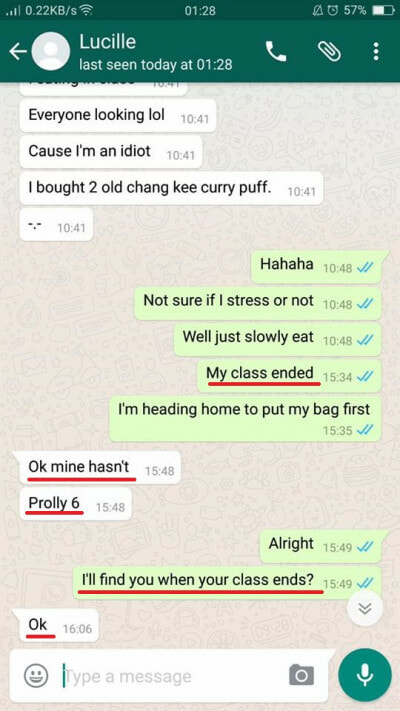 Jack later texted her again to ask about the exact meeting location but received absolutely no reply. It wasn’t until 9.30PM when Jack was already in the midst of watching the movie ALONE that she replied.

She even daringly played the innocent card with him. 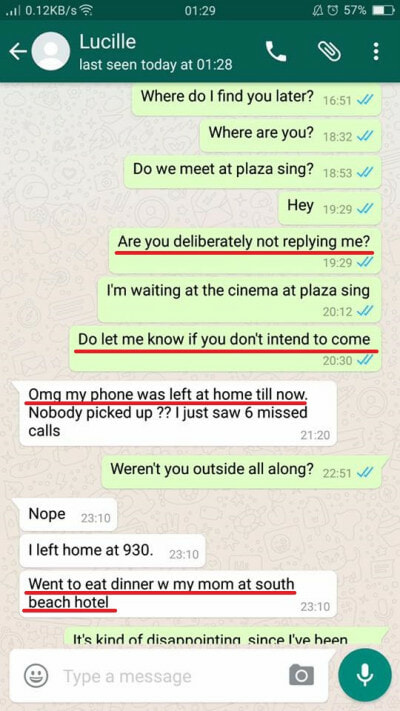 However, she wasn’t really at dinner. Lucille very boldly told that lie and then even more fearlessly posted pictures of her time spent with her ‘mum’ that night.

“F**king b*tch you think we all stupid is it. Who goes on a dinner and then a staycation with their ‘mum’ on Valentine’s Day with that kind of caption on their pictures.”

“My friend actually bothered to go and buy a present for her y’know and booked the tickets to the movie. He had to go watch the movie alone while she was off frolicking with her f**king BOYFRIEND in some fancy hotel.” 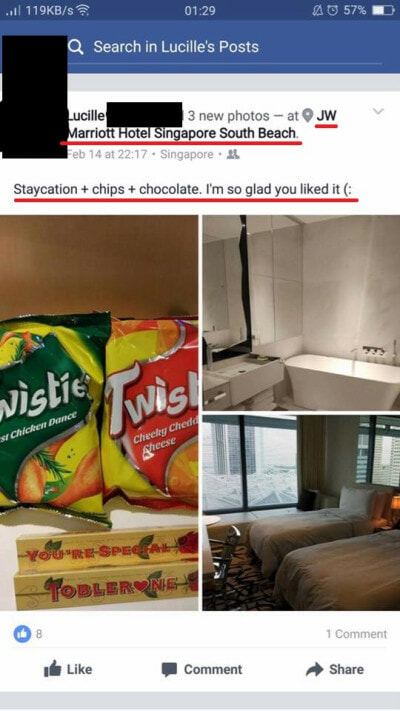 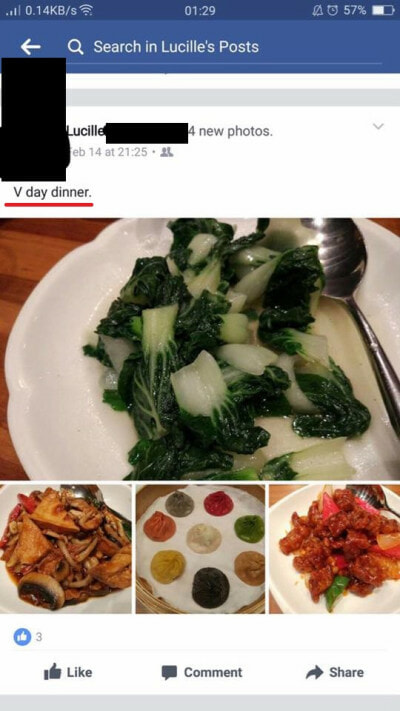 Obviously unhappy that this terrible girl was just playing around with Jack’s heart, Aeris decided to confront Lucille.

She demanded answers as to why Lucille had so heartlessly made plans with Jack when she obviously planned to ditch him since the beginning.

But Lucille still continued to play the innocent card, citing that she thought of Jack only as a friend. She even made up a lame excuse that it was just a last minute plan with her mother. Bruhhh…at least lie better lah… 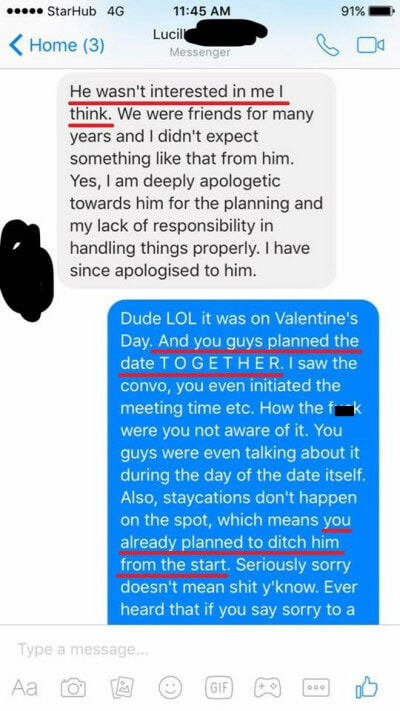 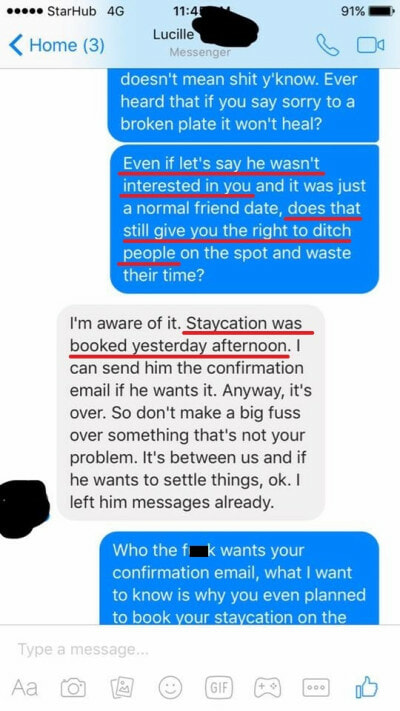 “JUST SAY IF YOU NOT INTERESTED LA . PEOPLE’S FEELINGS NOT FOR YOUR ENTERTAINMENT Y’KNOW.”

Aeris had initially tried to censor Lucille’s identity but the CSI-like netizens soon found her Facebook and exposed her. Obviously pressured by the attention brought to her, she quickly deactivated her Facebook.

This goes to show that you shouldn’t play with people’s feelings. In this day and age when the internet can easily make or break someone, you never know when your ugly side might be put under the spotlight.

Also, to the poor dude that got stood up, I hope you find a muchhhh better girl!

*Name is made up for easy reference, guy’s real name was not mentioned.