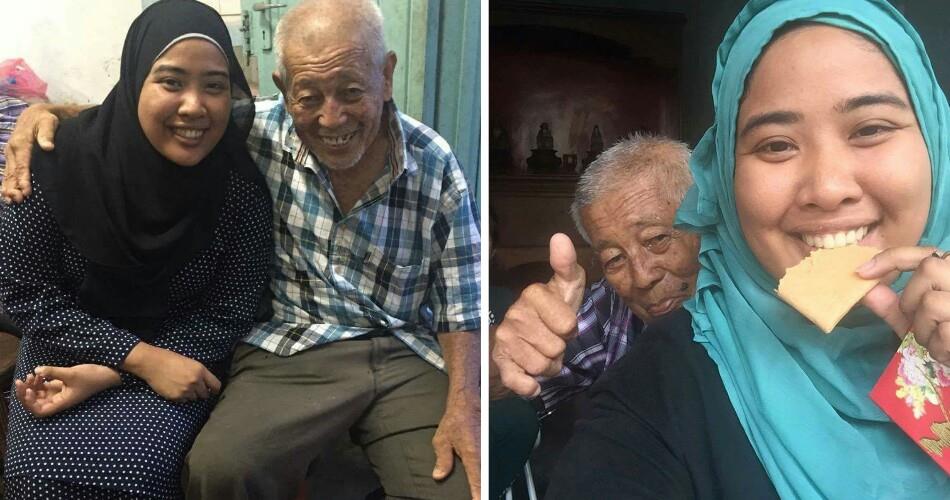 Hear ye, hear ye! It’s almost Chinese New Year but if you think it’s only the Chinese Malaysians who were into it, you may be wrong!

Uncle Ah San from Penang went viral in 2015 when kind-hearted Malaysians poured in their sympathy for the man who’s suffering from Elephantiasis.

If you’re reading through this and still wondering ‘eh who is this elder uncle and lady? Why they so femes one?!’, well this is the heartwarming story of how two unlikely individuals became very close friends.

In an interview with World Of Buzz, 29-year-old Shirin told us about how the two from two different racial backgrounds grew close.

“I used to be his neighbor at Gopeng Road, I grew up there and we became friends since I was 10 years old.”

It was during one fateful day when Shirin noticed Uncle Ah San struggling to cross Jalan Dato Kramat.

“When I was younger, I helped him push his cart across the busy road for him, so he can ride his cart to go collect card boards and used cans to sell. That’s how the friendship grew.”

The elderly man had issues due to his condition which affected his foot. Hence, causing him to move slowly.

But this did not stop him from always being nice and friendly to everyone. He would often sit outside of his home arranging the cardboard boxes and cans for recycling and smile to his friends and neighbours.

But the heartbreaking thing is, this man is all alone.

“He still lives in the same house, his wife died 4 years ago. He is all by himself, no kids, only distant relatives.“

Because no one was there to support uncle, and uncle himself became too old to go out to collect the cardboard boxes, Shirin decided to do something to help him.

“I decided to help him more because he is getting older and weaker, his left leg with elephantiasis requires daily dressing at hospital.”

“He has two special stools that he uses to move around in his house, it will make us feel sad when we see it but that’s how he rolls.“

“We did a crowdfund in 2015 and used the fund to hire nurses to do the dressing at home instead.”

But aside from just hiring 3 Hokkien-speaking nurses, Shirin even used the money to purchase a better bed and wheelchair!

Thanks to these better furniture, Uncle Ah San has been able to live more comfortably since. However, just like any other individual, Uncle Ah San didn’t want to feel trapped inside his own home.

But Shirin isn’t too keen on letting the elder man to go around the little island all on his own. She wanted to ensure that Uncle Ah San still had some aid.

“Now that the nurses no longer go and do his dressing, I am planning to work with Rapid Penang to hire their ‘Rapid Mobiliti’ van to send him to the hospital, as the van caters mainly for wheelchair bound passengers.”

One of the reasons why Shirin is so consumed with ensuring that her hometown neighbour has help is because she now works and lives in Kuala Lumpur.

“I try to come back to Penang once a month, otherwise I will get my friends here to go and check on him and pass some pocket money.”

Shirin added that she wanted all of Malaysians to be mindful of the people around us, especially our own family.

Despite coming from a Malay background, Shirin Aziha Shahidan is organizing a pot-luck gathering on the very first day of CNY right in 82-year-old Uncle Ah San’s home! That’s some serious 1Malaysia spirit right there!

And no worries, because Shirin has made sure that every friend, family or even strangers who want to get to know the elder man can join in!

Also, if you want to watch a reenactment of Uncle Ah San and Shirin’s friendship, you can watch the touching story here:

All images were shared to us by Shirin