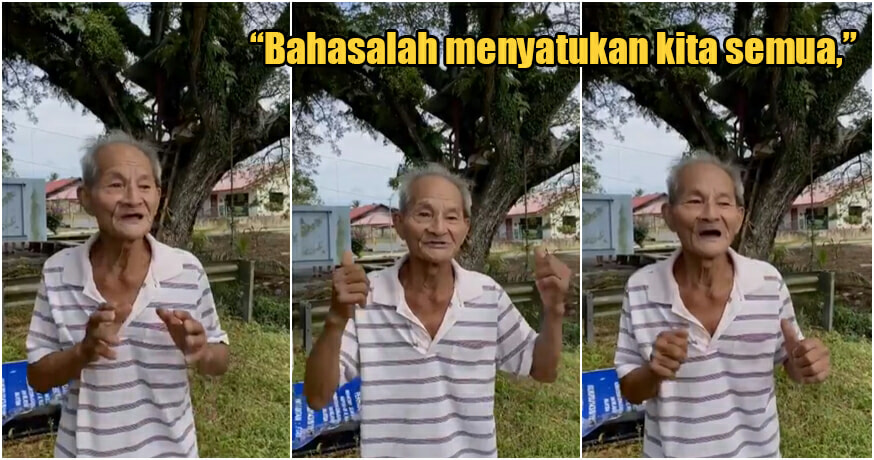 Given our status as a generally multicultural nation boasting a wide spectrum of races that live in harmony with one another, it is inevitable that many Malaysians will wind up being able to pick up more than a single language throughout their lifetime. And you will be surprised to know that this seamless transitioning between languages is not only inherent with Malaysians today, but even during the time of our forefathers too!

Shared recently by DAP member Marina Ibrahim over her social media, an elderly Chinese uncle has gone to win the hearts of Malaysian netizens all over for his ability to sing the song ‘Bahasa Jiwa Bangsa‘ without missing a beat.

The short 37-second video shows how the uncle joyously recount the lyrics of the song in Malay, putting even some young millennials to shame with his fluency in Bahasa.

And for those who know the meaning behind ‘Bahasa Jiwa Bangsa‘, which was a national slogan that was promoted by the Malaysian government years prior to bolster our national identity through the use of language, you’ll realise how much more significant the song is! The uncle is said to be living in Pagoh, Johor, an area which according to one netizen, is inhabited by many senior Chinese citizens who are similarly fluent in Bahasa as well.

The video has since gone viral across social media, with many netizens chiming in their support and praise for the uncle.

Which goes to show that it really doesn’t hurt to learn and pick up more than just one language. After all, being able to speak multiple languages can really be a boon in times like these!

Also read: This Woman Is TV2’s First Ever Malay Anchor Working On Its Mandarin News Programme!