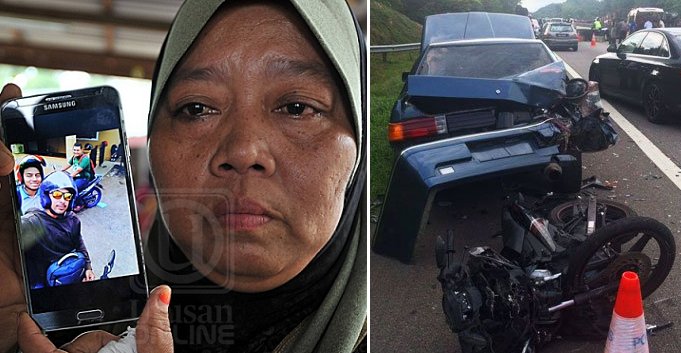 “I miss my children very much. Ramadan this year will be very different without them,” said Patimah Md Kayos, 50, mother of the two victims, her second son Mohamad Ma’arof Shadik Mohamed, 38, and her 11th, Alam Iqbal, 19.

The two men died in an accident at Km228 North-South Expressway (northbound) here on May 22.

She blames the death of her sons on the selfish behaviours of the Malaysian drivers who used the emergency lane.

“I remember they usually break their fast in Malacca on the first and second day, their favourite dish is prawn sambal,”

Patimah said her conversation with Alam Iqbal before he left for Kuala Lumpur together with Mohamad Ma’arof caused a strange stir in her heart.

The accident occurred at 3.30pm, and a total of 79 vehicles had been identified by Road Transport Department (RTD) for using the emergency lane. These irresponsible vehicles caused the late arrival of the ambulance for about 45 minutes!

When Patimah rushed to the Seremban Hospital, she arrived at 7.30pm only to be told her two sons were in critical condition.

Patimah said she was asked to sign a consent letter for surgery to be carried out on Alam Iqbal, but half an hour later, doctors said his condition was very critical and that his heart was not responding to the treatment.

Doctors told her that both could not be saved.

Patimah and her family hopes the authorities, especially the RTD, will take stern action against those who used the emergency lane.

If you ever think you’re ‘entitled’ to use the emergency lane, think again.

The people here at WOB would like to gently remind their readers the importance of road safety and how misuse of emergency lanes can go very sour!

Read here for the medical officer’s point of view (POV) trying to arrive to an accident scene but was severely delayed due to Malaysian drivers who misused the emergency lane. It will make you furious. 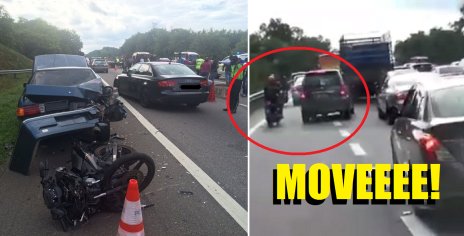