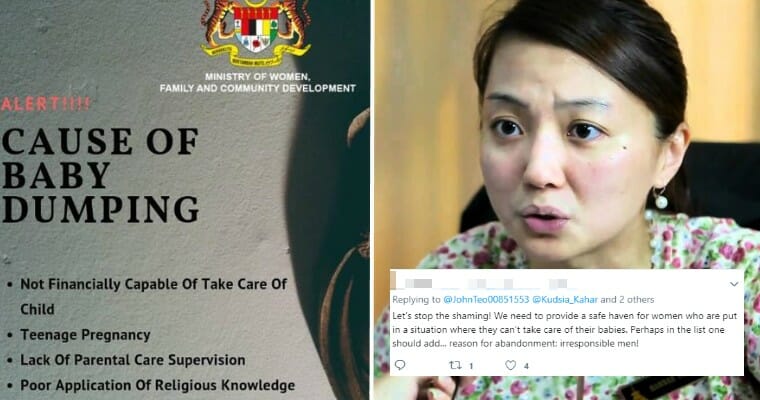 With an average of 100 cases a year, baby-dumping is a terrible crime – fuelled by desperation and hopelessness – that has more than half the babies dumped found dead. The Women’s Ministry (KPWKM) has recently released some posters to raise awareness and shift perceptions to help reduce these troubling numbers.

However, one of these posters has come under fire on social media for listing “promiscuity” and “lack of religious upbringing” as some of the core causes, reports The Star.

On January 17, Twitter user John Teo voiced out that the poster was “victim-blaming”, tweeting “Blaming baby dumping on lack of religious upbringing and promiscuity is totally misguided! Placing vulnerable women and girls to shame have untold consequences!”

“What we need is non-judgemental, compassionate support. Please amend such posters,” he continued, and tagged the official Twitter accounts of Hannah Yeoh and KPWKM. 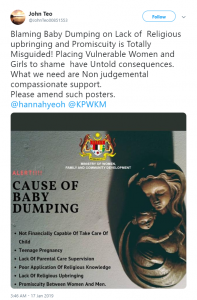 The ministry responded quickly, replying to his tweet with “Thank you for your comments and suggestions, we will do our best to improve for mutual benefit.”

Deputy Minister of KPWKM Hannah Yeoh also reposted Teo’s tweet saying “An overhaul of all similar social media postings by @KPWKM. Thank you for the feedback and there will be improvement,” followed by tagging the Deputy Prime Minister Dr Wan Azizah, who also serves as the Minister of KPWKM. 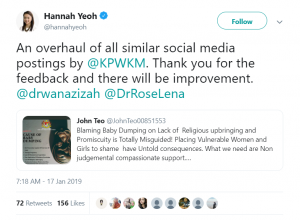 The ministry and its two leaders were cheered on by netizens for their quick reaction and openness to change. 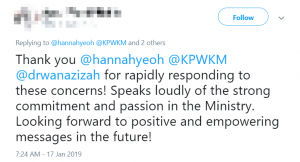 The tweets also seemed to spark a discussion, with some condemning the victim blaming:

One user weighed in that the poster is not all that wrong: 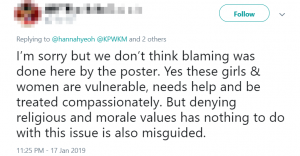 Hannah Yeoh has spoken about baby dumping before, citing a lack of sex education as a major factor. Indeed, Yeoh announced earlier this month that a comprehensive sex ed program is in the works. With our ministers displaying their commitment to improving our country, we can all have high hopes for the future ahead.

What do you guys think about the poster? Is it really victim-blaming or is it indeed a valid factor we must tackle to reduce teenage pregnancies? Let us know in the comments below!

Also read: Govt to Work on Sex Education Syllabus After Stats Show Students as Young as 13 Are ‘Active’