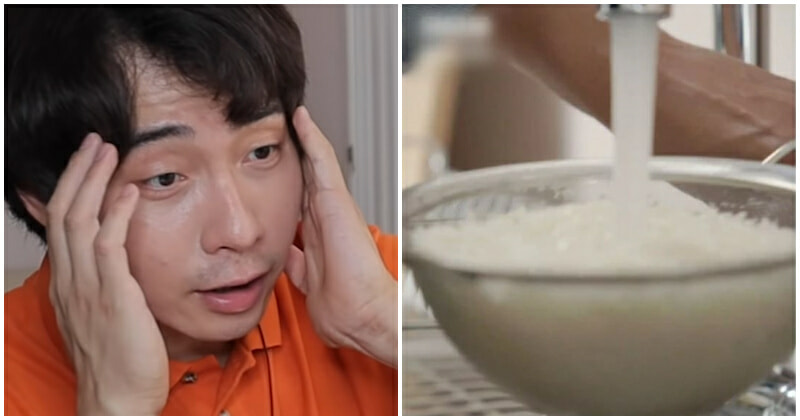 Egg fried rice is probably one of the dishes that most Asians know how to cook. To see it being made in such a different and ‘unique’ way is a little unsettling, for sure.

The actual recipe video dates back to 22nd March 2019 on BBC Food and the chef was Hersha Patel. It was supposed to be a simple video for egg fried rice. Sounds good right up to now right, so what’s the problem?

So, the chef starts off with measuring the rice in a coffee cup and she asks everyone to use a one to two ratio (one cup rice and two cups of water). She doesn’t rinse the rice first and just dumps it straight into a pot of water. Once the water boils, she says to let it simmer for about ten minutes or so.

Then she moves onto the eggs, whisks it and puts it onto hot oil. She scrambles them, puts them onto a plate and aside.

Then comes the good part. She turns her attention back to the rice and she pours the rice out onto a sieve and ran it under tap water! She says that the rice has a lot of starch in it which make it clumpy when it’s time to stir fry. By rinsing it, it will make sure that the rice is nice and fluffy.

She chops up some onions, peppers, spring onions, garlic and grates some ginger for the fried rice. She adds in some frozen peas as well. When she’s done cutting up the vegetables, she stir-fries the onions and peppers then adds the other ingredients, including the rice and eggs. Then she just stirs in some soy sauce over the fire.

Many netizens had a lot to say and most of it is about the way she cooked the rice. One of them said:

“She literally cooked it like how she would cook pasta.”

Another netizen said the rice for fried should have been leftovers from the night before. Some even included a recipe for their own versions of fried rice.

After snooping around and researching different methods to cook rice, the method that Ms Hersha Patel used is actually a method for Persian rice! And yes, the recipes do call you to cook the rice like it was pasta, some chefs even add salt to it when it’s boiling!

Well, we all know that there are many other fried rice recipes out there! What’s the most delicious one that you have come across? Let us know in the comments!