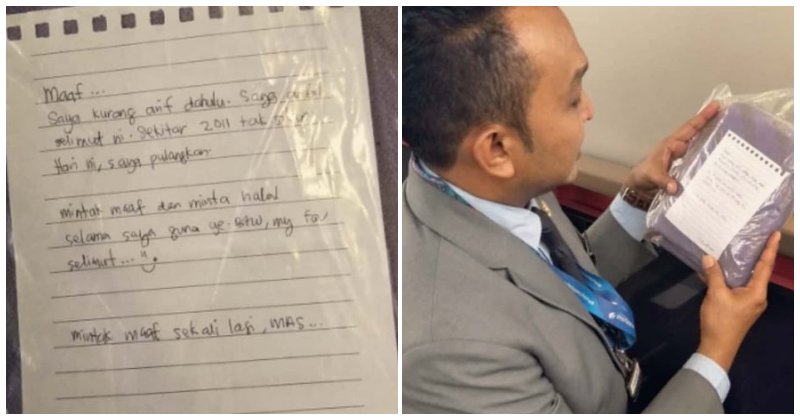 Let’s be honest here. Almost all of us have taken an airplane blanket before. What, they very comfy lehhh!

Taking to Twitter, netizen @Hazrey shared an image of a passenger returning a blanket he took nine years ago, folded neatly and wrapped in plastic with a note on it.

The image which was taken by Leading Crew for Malaysia Airlines, Kamarulzaman Abd Karim (a.k.a. Kay) happened during a flight from KLIA to the King Abdul Aziz Airport in Jeddah.

A former classmate shared this story tadi on his route MH156 Kul-Jeddah. Posted with permission.

Sharing his story with Harian Metro, Kay said: “We would routinely check the cabin after all passengers have left the plane, just to check whether or not personal belongings are left behind by the passengers.”

“Upon check-up, we found a parcel wrapped in plastic, which turned out to be a MAS blanket with a note on it.”

What was the note? 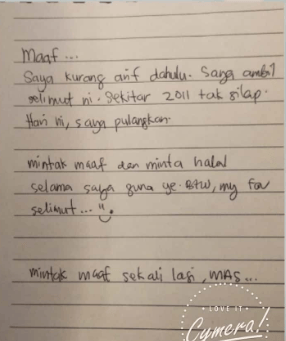 The note writes, “Sorry, I didn’t know at the time. I took this blanket when I boarded your flight in 2011 if I’m not mistaken.”

“I’m sorry for the inconvenience and it is my favorite blanket.”

According to Kay, it is common practice that the blankets are returned when the plane lands, but there are some who take the blankets home as souvenirs.

“It would’ve never occurred to me that there are those out there who would return it.”

The original tweet which has garnered 1,478 retweets, witnessed netizens commending the passenger for doing the right thing, and recall their own MAS blanket story.

One netizen writes, “When I was on my flight to Beijing, there was this baby who was freezing cold. It was 1 am and probably the clothes that the baby had on was not thick enough.”

“One stewardess came by and provided the blanket. She said to just keep the blanket and not return it.”

Malaysian hospitality at its best right?

Another shared a story while boarding MAS’s A380 whereby the staff told the netizen that he can take the blanket as a souvenir, but he did not. However, they got free peanuts too!

Truly the best representation of Malaysian hospitality, we applaud both MAS and the passenger alike for showing the best attitude that we Malaysians have to offer.

Also read: Malaysian Signalman Amuses Pilots and Netizens With His Hilarious Dance Moves on The Runway 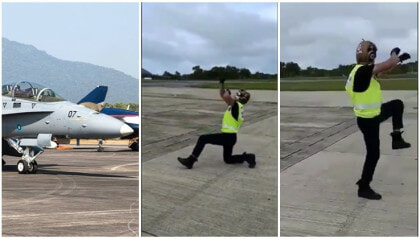