Disclaimer: The left picture in the above featured image is for illustration purposes only.

This is just horrible!

Recently, news of an old woman allegedly forcing a 13-year-old boy to have sex with her has caused shock and horror across Indonesia.

According to Harian Metro, 80-year-old Jowo from Kota Palembang, Indonesia was recently accused of repeatedly raping a 13-year-old boy. The accusation was made by the boy’s 33-year-old mother, Rohana, who recently made a police report against the old woman.

Rohana found out this was going on when her son confided in her earlier this month. At around 10pm on the 6th of July, her son arrived home, appearing traumatised.

Noticing her son’s demeanor, Rohana asked him what was wrong. The 13-year-old then told his mother that he just ran out of Jowo’s house because he was forced to have sex with her.

According to the boy, the old lady forced him to have sex with her 10 times and did this when her husband wasn’t at home.

Jowo, who earns money from collecting recyclables, looks for her victims when her husband goes out for work.

The 13-year-old reportedly said that the old lady threatened to kill him if he didn’t cooperate with her. After the act, she would even pay him 15 Rupiah (nearly 0 sen)!

“When her husband isn’t home, she will ask me to have sex with her. That night (6th July), she threatened to murder me if I didn’t comply,” said the boy.

Shocked after hearing of his son’s traumatising experience, Rohana immediately brought her son to a nearby police station to file a report against the old lady.

“My son is still so young and he was forced to do such a thing. I can’t accept this,” Rohana told the police.

What made things even worse for Rohana was that they used to frequently help Jowo and her husband by giving them money every now and then.

As for the old lady’s fate, Palembang Police are currently investigating the situation and will be expected to take action soon.

Also read: 16yo Boy Hates Leaving 71yo Wife Because He Will Miss Her Too Much 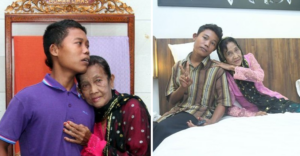