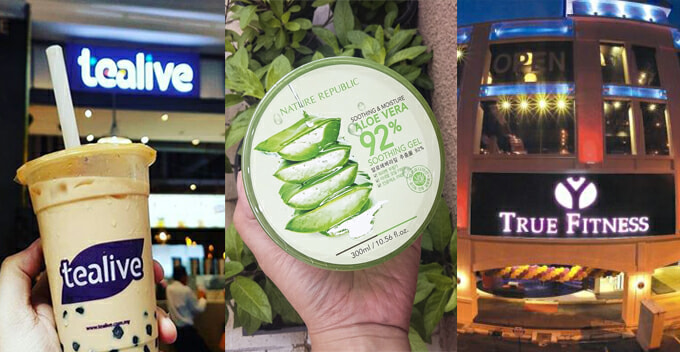 Admittedly, 2017 is a year full of surprises for Malaysians. Companies or stores that were close to our hearts suddenly announced they were closing down for good. Some even went bust overnight without prior notice, leaving their loyal customers in a pool of confusion.

So we’ve rounded up 6 prominent businesses that shocked Malaysians with their closure announcement in 2017 and the possible causes of it. 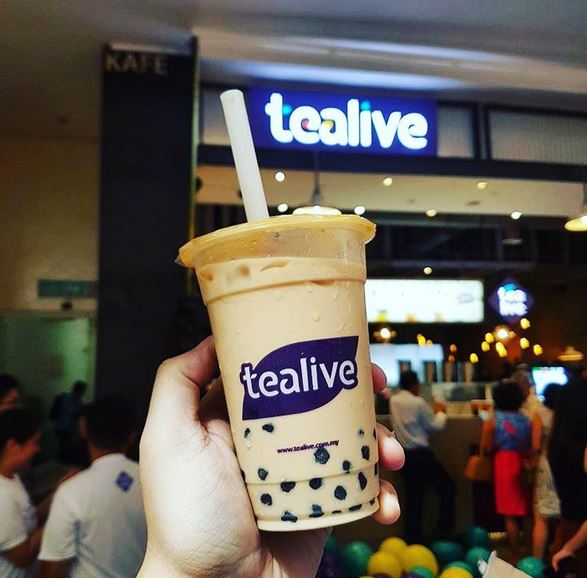 This news definitely gave millions of Malaysians ‘heart-attacks’ when they first announced Chatime leaving Malaysia. It was later revealed that ‘Chatime’ will be rebranded to ‘Tealive’ early March hence we will still get to enjoy the delicious milk tea.

This dramatic falling-out is believed to have stemmed from the breach of agreement by Loob Holding as they allegedly used ingredients acquired from a third party. As such, La Kaffa International Holding terminated the franchise in Malaysia following the agreement breach. Even though some stores are rebranded, La Kaffa will still continue operating Chatime here in Malaysia. 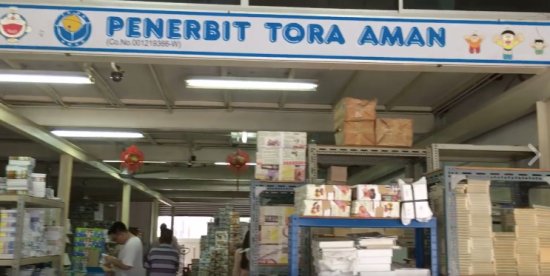 Remember the good times when we curled up in our bed reading comics? Well, those days are gone because one of the biggest comic book publishers, Tora Aman, has ceased operation in April 2017.

Operating since 1993, this publisher was responsible for translating our all-time favourite comics such as Great Teacher Onizuka, Slam Dunk, Doraemon and Detective Conan. 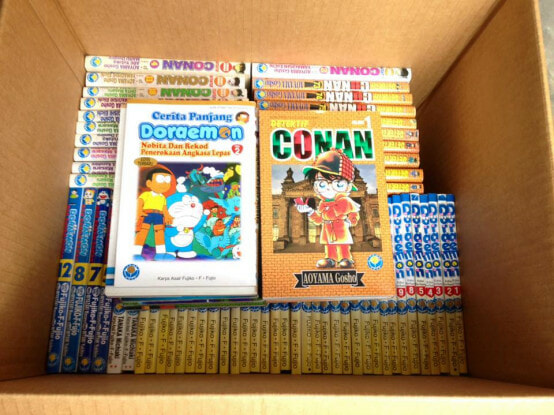 However, the rise of online comic platforms have crushed their sales. With the future of comic books looking rather bleak, they chose to end the business by conducting a massive clearance sale. It was reported that a comic book that’s normally sold at RM8 was let go at only RM2! 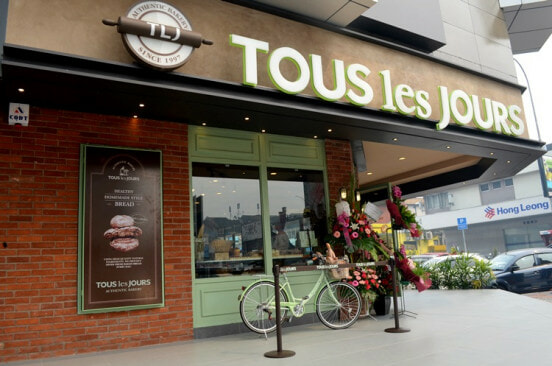 In May 2017, this famous French-Asian bakery suddenly announced on their Facebook page that they were closing down for good. The saddest part was that not just one, but all four outlets located in Bangsar, Empire Damansara, Empire Shopping Gallery and WOLO Bukit Bintang were closed down. I miss their milk bread 🙁

Other sources mentioned that they may be only temporarily closing down, but their notice definitely seem to indicate otherwise! 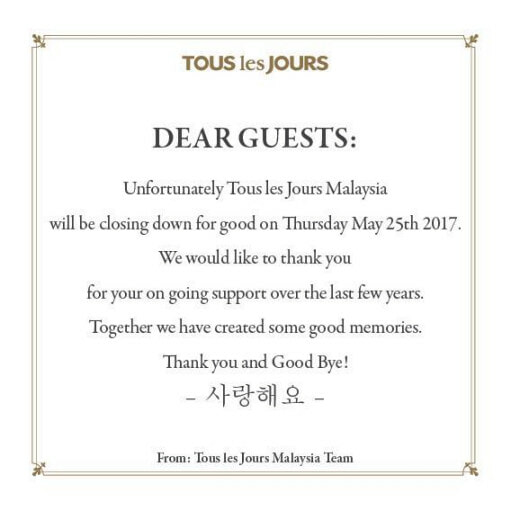 Don’t worry guys, because when one bakery closes, another opens. That new kid in town is Paul, a world-renowned French bakery. Check out their flagship store here! 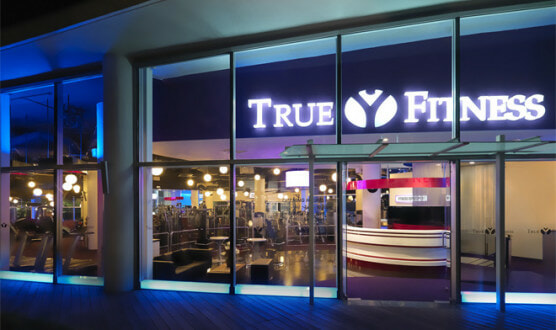 The nation was shaken when True Fitness’ abrupt closure first hit social media platforms early June. Some 2,000 members were stranded with some having paid over RM8,000 for lifetime memberships. All three branches in Malaysia were closed down simultaneously without prior notice.

Refusing to own up to their fault, True Fitness simply passed the problem to CHi Fitness and the drama continues even until today. 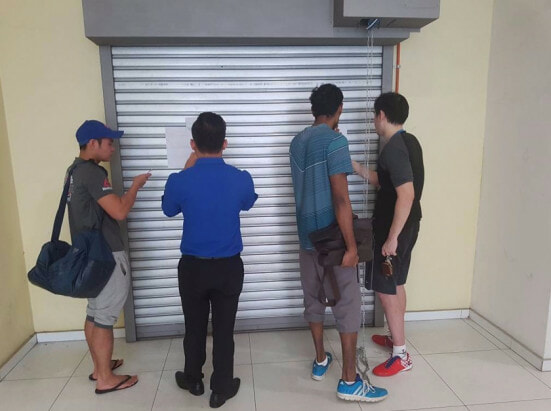 Perhaps the only good news that came out from this scandal was that True Fitness members can claim up to RM25,000 from MCCT. Read more about it here ! 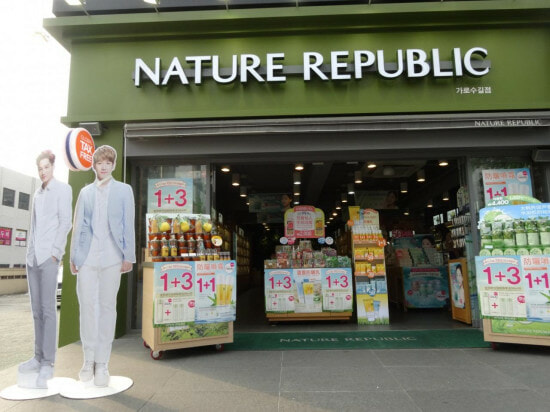 The news of Nature Republic Malaysia closing down first came to light when it was announced on its Facebook page end of June. Netizens were absolutely panicking and rushed to stock up  their aloe vera gel before the stock runs out. Did you manage to get yours?

We contacted Nature Republic Korea to get to the bottom of why they are ceasing their operations here but they only told us that they will be issuing an official statement soon-ish. Unlike the previous companies above, Caltex DID NOT pull out from the Malaysian market. However, it was still shocking for Malaysians when 15 Caltex petrol stations were suddenly told to cease operation by June 30. With Raya just days away, this has got to be one of the worst years for the station owners.

Some 200 employees became jobless after Chevron Malaysia issued a termination letter to 15 Caltex petrol stations. According to FMT, one affected petrol station owner claimed that they were forced to bear the cost of installation and maintenance of the outdoor payment terminal, which by right should’ve been borne by Caltex.

Hmm… we wonder which company will surprise us next?

Also read: 11 Speakeasies in Klang Valley You Need To Try At Least Once! 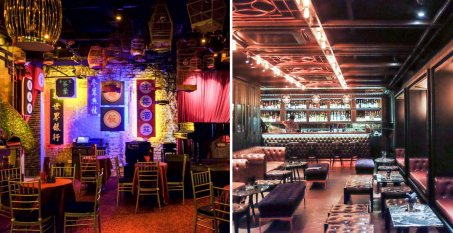