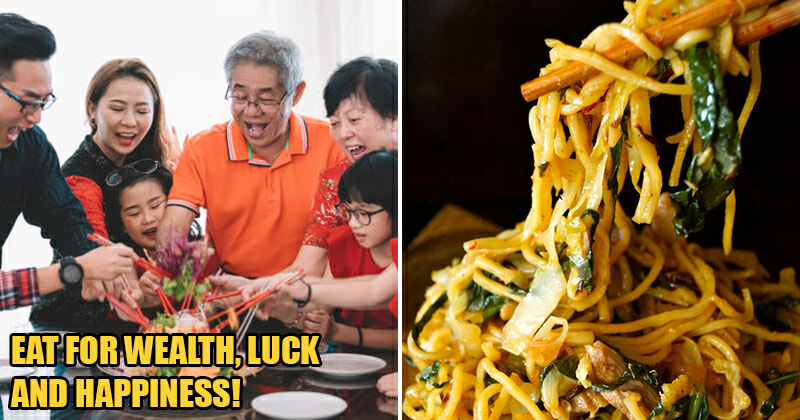 Every Chinese New Year, there are certain dishes that are always found on the dinner tables of those celebrating the lunar new year. The auspicious symbolism of traditional Chinese New Year foods is usually based on their pronunciation or appearance.

Not only do the dishes themselves matter, but also the preparation and ways they are served have a lot of meaning behind them. This year, while many of our CNY traditions may look a bit different, we can take comfort in knowing that some customs, like having our favourite CNY dishes and reuniting with family, will stay the same. So here are some of the delicious Chinese New Year dishes we’ve rounded up, and what they symbolise: 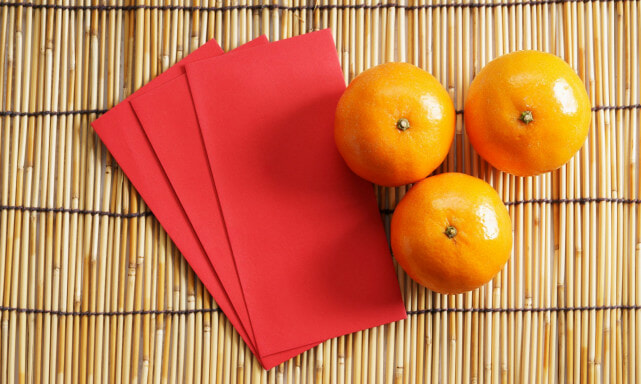 Perhaps the most common out of all foods you will find at a Chinese New Year dinner (and everywhere else this season) are tangerines and oranges. They don’t necessarily have to be tangerines and oranges though, as good fortune fruits can be any fruit that bears a round shape and is “golden” in colour, symbolising fullness and wealth.

The Chinese word for orange is 橙 (chéng) which sounds like ‘success’ in Chinese, while one of the ways of writing tangerine is 桔 (jú) that contains the Chinese character for luck 吉 (jí). 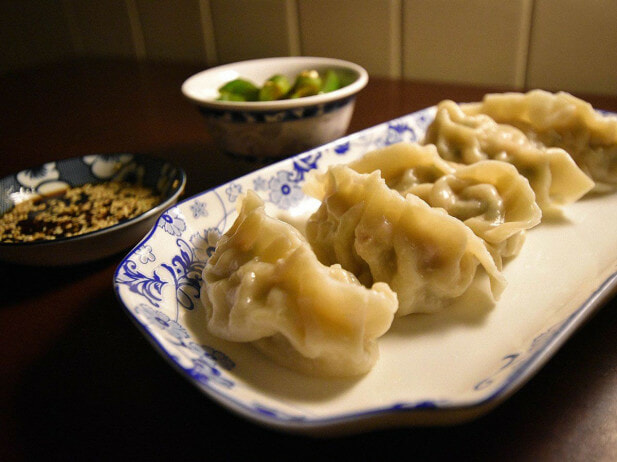 Dating back to around 1,800 years ago, dumplings are a classic food for the new year, and a traditional dish eaten on the eve of Chinese New Year. Chinese dumplings are made to look like Chinese silver ingots (not bars, oval and boat-shaped). Legend has it that the more dumplings you eat during the New Year celebrations, the more money you can make in the coming year.

Here are some of the ways these lucky dumplings are traditionally prepared and served:

One more thing to note is that dumplings should be arranged in lines instead of circles because circles will imply that the person’s life will go around in circles, never going anywhere. 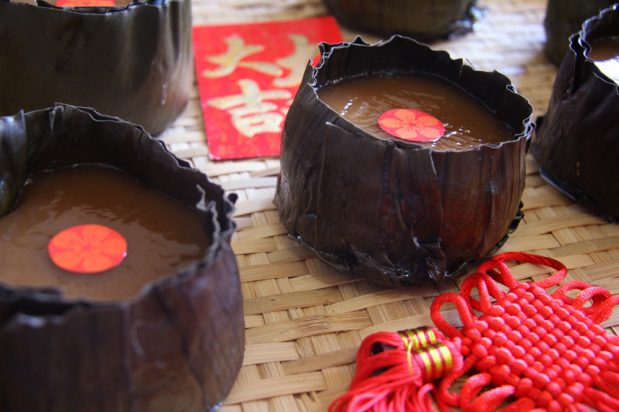 This glutinous rice cake dish is a lucky food eaten on Chinese New Year’s eve too. The name sounds like “getting higher year-on-year” and this implies that the higher you are, the more prosperous your business is as a general improvement in life.

Niángāo has a history of at least 1,000 years. In the early Liao Dynasty (907 – 1125), people in Beijing had the custom of eating glutinous rice cakes on the first day of the Lunar New Year to commemorate Prime Minister Wu Zixu, a leader in ancient China who saved his people from starvation during a war siege using bricks made from glutinous rice flour. The main ingredients of Niángāo are sticky rice, sugar, chestnuts, Chinese dates and lotus leaves.

4. Tāngyuán is believed to bring togetherness 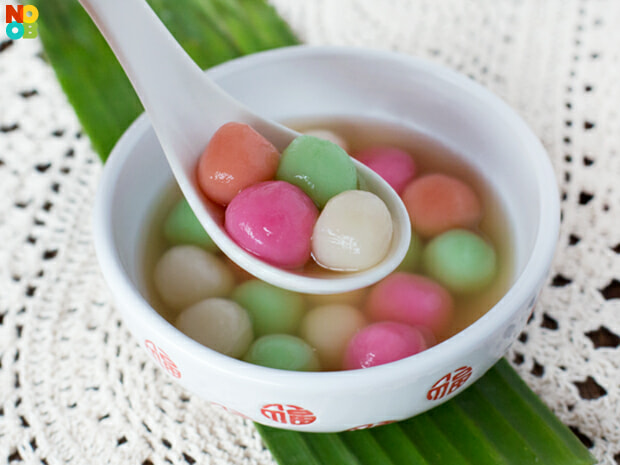 Tāngyuán is a soft and chewy rice ball dessert served in sweet ginger broth. The pronunciation and round shape of Tāngyuán are associated with reunions and being together. Chinese families also serve these round Tāngyuán on the 15th (last) day of Chinese New Year when there is a full moon.

Traditionally, they are white in colour but these days they are made in different colours and have substitute fillings such as chocolate, lotus seed paste, sesame and even red bean paste to give more variety to the dish. 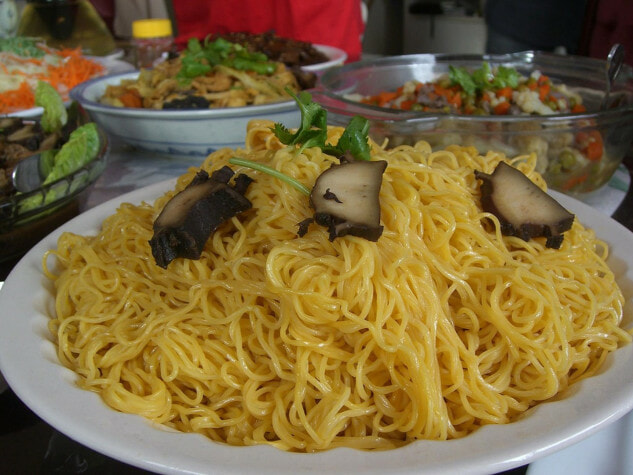 These ‘longevity noodles’ or ‘long life noodles’ symbolises a wish for longevity as their length and way of preparation are also symbolic of the eater’s life. They are longer than normal noodles and uncut, either fried and served on a plate or boiled and served in a bowl with its broth.

This noodle dish is also commonly served during birthdays, the celebration of a new baby and at weddings, all of which would bring wishes of a long life!

6. Fish symbolises an increase in prosperity 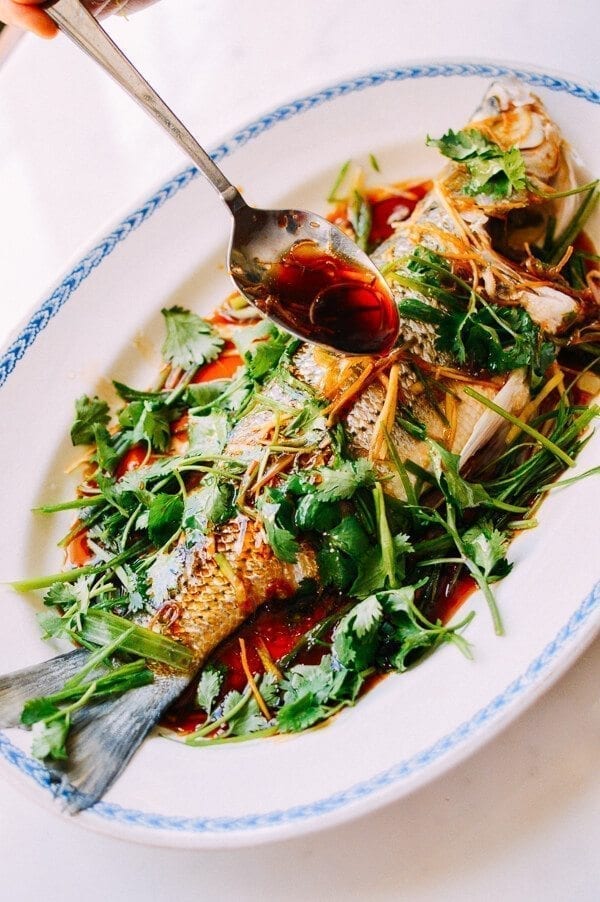 This is the most common dish on the menu at a Chinese New Year dinner. The word fish, or 鱼 (Yú) in Chinese sounds like ‘surplus’. This is to make it sound like we have a surplus at the end of the year because by having ‘extra’, we can “make more” in the next year!

The way the fish is served at the table also has its meanings and customs. These rules need to be followed as per tradition or you might risk offending someone!

We’re pretty sure most of you have observed these traditions every year as everyone laughed and traded banter with a glass of Guinness in hand, right?

Ever since we can remember, there would always be that glass of stout sitting on the dinner table during a Chinese New Year gathering and just like our favourite CNY dishes, this is one thing that has hardly changed over the years. It definitely instils a sense of familiarity and feeling of happy nostalgia that the festive season has begun.

Even though CNY might be a little different this year, at least we still have the familiar taste of Guinness!

Speaking of which, Guinness wants to help make your Chinese New Year even more festive this year with this special deal! 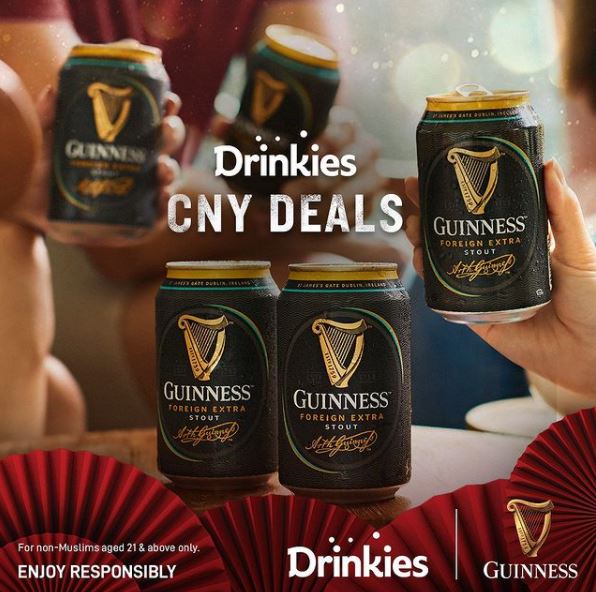 From now until 28th February, you can get Guinness Foreign Extra Stout from drinkies.my at special prices! The more you order, the more you save!

What’s more, first-time customers get to enjoy RM20 off their first order with the promo code ‘WELCOME20′ when you spend a minimum of RM180! So worth it!

This definitely calls for a reason to celebrate! So let’s remember to make the most of this year and celebrate all the unfamiliar firsts with family, friends and a glass of Guinness in hand. It’s gonna be a CNY to remember! <3

With that, here’s wishing all our readers Gong Xi Fa Cai !

This promotion is strictly for non-Muslims aged 21 years and above. Guinness urges all Malaysians to drink responsibly and do not drink and drive!