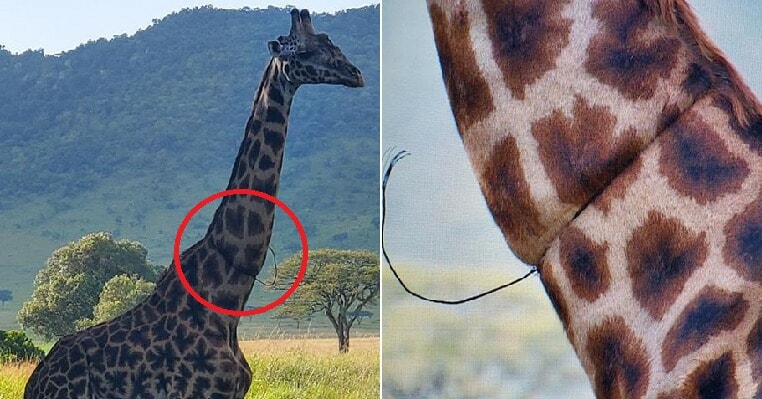 There are so many endangered wildlife out there as deforestation and poaching get more and more widespread these days. Recently, the production team of Taiwan EBC News went to Africa for a shoot and they encountered a heartbreaking scene. The host Bai Xinyi posted the encounter on social media, when they met a giraffe who had gotten trapped in a poacher’s wire snare.

She said that she had never seen a giraffe’s tears until that day when one of these creatures suddenly stopped in front of their car. “This giraffe stood in front of our car and we could see tears flowing from its eyes. We were puzzled until we look closely and saw that the giraffe’s neck was entangled in a broken steel cable. I believe that the giraffe wanted to ask us for help,” she said.

While Bai explained that poachers would often try to trap giraffes by tying the wire snares in the trees. Then when the giraffe approaches the trees to eat the leaves, its neck will get trapped in the wires. The poor giraffe will then get wrapped until it suffocates to death. While giraffes do not exactly cry as they do not have tear ducts but some people have seen them with tears.

Many people might think that giraffes are not endangered but for the Masai giraffes, their population has fallen by nearly 50 percent in the last 30 years, National Geographic reports. That’s mainly due to poaching and changes in land use, which has caused the number of innocent animals to dwindle swiftly. They are poached for their hide, meat, bones, and tails while some cultures even believe that giraffe bone marrow and brains can cure HIV and AIDS.

“This poor innocent giraffe was lucky enough to escape from the snare with its life but when I saw it, I was heartbroken by what humans had done. I apologised to the giraffe for humans who caused them to suffer untold pain,” Bai said. She added that they immediately notified the forest ranger who would anaesthetise the giraffe before removing the wire coil around its neck.

However, this does not solve the problem, as poachers would still continue tying snares around the trees which can cause injury or even death to other giraffes. She said that she has seen many innocent animals suffering due to humans and urged us to stop torturing them for our own greed. Her post went viral, with close to 8,000 shares at the time of writing.

It’s time to stop killing all our wonderful flora and fauna! 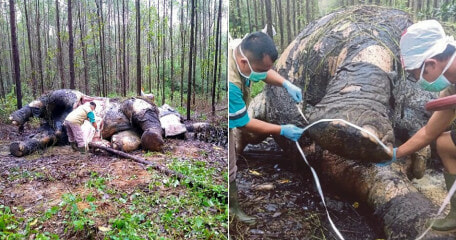