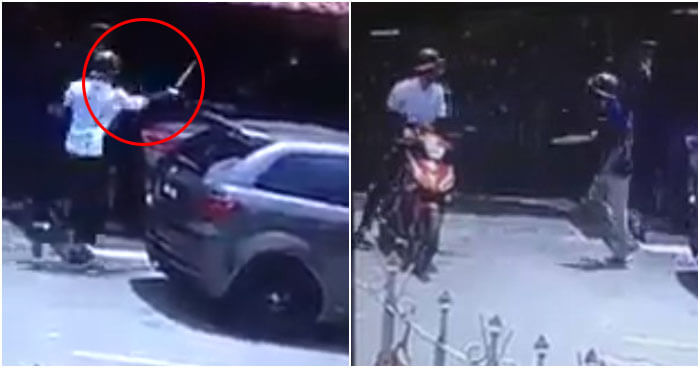 It feels as if the streets are getting more dangerous by the day, and when cases like this happen, it only makes us more fearful! A woman was robbed in front of her house in Taman Sri Gombak, Batu Caves by two motorcyclists and slashed with a parang before having her gold bracelet stolen.

CCTV footage on site showed two men riding into the Taman Sri Gombak neighbourhood around 2pm on March 5, on a red Yamaha Y15 motorcycle. According to China Press, they parked behind a Proton Satria which was in front of the victim’s house. As soon as he saw the woman in her front yard, the first suspect barged in and attacked her, catching her off guard. At that point, the second suspect took the opportunity to slash her with a parang, and snatch her gold bracelet. The assailants fled the scene shortly after.

All in all, the incident ended as quickly as it begun, as it unfolded in less than a minute. You can watch the CCTV footage here. Disclaimer: Viewer’s discretion advised.

When contacted by Harian Metro, Deputy Police Chief of Gombak, Superintendant Arsad Kamaruddin confirmed a report of the robbery has been made, and that an investigation is now underway to nab the suspects.

This violent break-in follows hot on the heels of a near-robbery in Puchong that took place two weeks ago, where seven motorists attempted to ambush a man while he was parking his car. Fortunately for the victim, he was able to close his metal-grill gate in time to prevent the thieves from entering. This poor woman from Taman Sri Gombak, however, was clearly not as lucky.

We pray for her speedy recovery, and hope that this will alert not only the residents of the said neighbourhood, but anyone else who stays in landed properties! With cases like this becoming more rampant by the day, it’s more important than ever to be extra aware of your whereabouts and act fast. 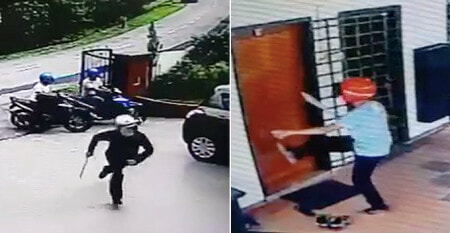