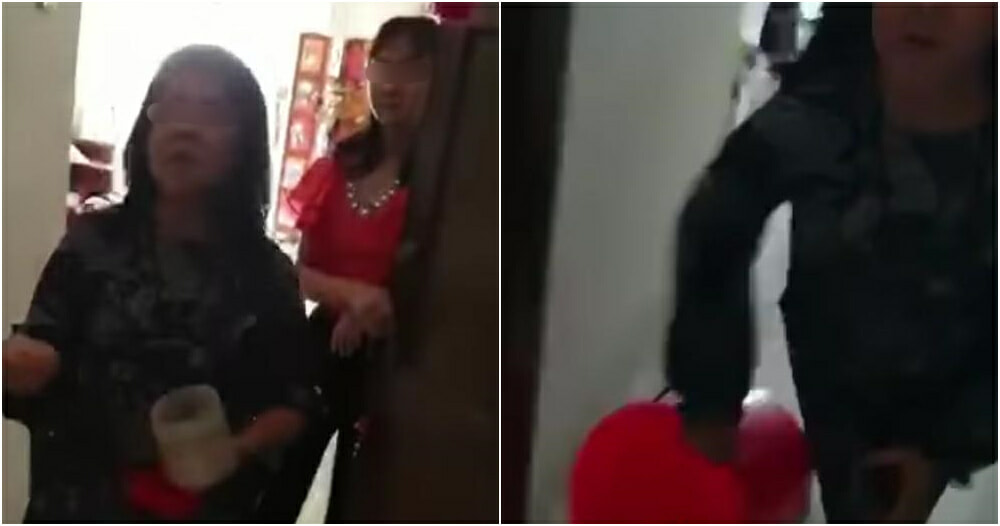 Recently, a reader reached out to World of Buzz to share an incident that she had encountered on Chinese New Year whereby a rather heated argument had taken place between her and the tenants residing above her apartment unit.

The reader, Mary shared her story publicly on Facebook as well using her son’s account and it has been starting to catch the attention of many.

The incident happened when Mary decided to confront her neighbours, a family of four (a mother and three daughters), living above her apartment unit as they often make strange loud noises both day and night.

However, things took a turn when the two of them ended up getting into a heated argument that caused her neighbour to throw salt at her. Mary was also splashed with a bucket of water which soaked her completely.

Mary explained to World of Buzz that this is not the first time that she had confronted her neighbours.

“The problem started about 8 – 9 years back when the family shifted to the unit above mine. I’m on the 11th floor while they are directly above me on the 12th floor. They began to make noises during the day and night.” she told World of Buzz.

These loud noises tend to occur from 7pm and continue till the wee hours of the morning, as explained by Mary and her son, Reshe.

According to Mary, the noises include:

Here is a video recorded by Mary and her son as proof of the kinds of sounds they have heard in the last few years.

Mary then explained to World of Buzz that she is a heart patient, hence getting proper rest is crucial for her as her pacemaker is not stable. But, with the noise pollution going on, she is unable to sleep at night or even take a nap in the afternoon.

This has resulted in her not only feeling restless but taking a toll on Mary’s blood pressure as it was on a constant rise. Mary has been feeling very stressed out with the situation and was unable to keep calm anymore.

She then decided last Saturday, 13 February, that enough is enough. Mary headed up to their unit, rang the doorbell and told them to please not make any more noise as she needed to rest.

“While I was about to leave one of the daughters used a foul word and said we will continue and that “there’s nothing you or anyone can do to us”. I was upset with their foul words and told them to stop,” Mary explained.

At the time, Mary was standing by their house grill. They told her that she was invading their property. “I told them to call the police and let’s settle the problem,” Mary said.

“While talking, one of the daughters sprayed Dettol on my face and eyes and said they will come and ring my doorbell in the middle of the night. I told them I will keep ringing the doorbell till they stop their abuse,” Mary claimed. 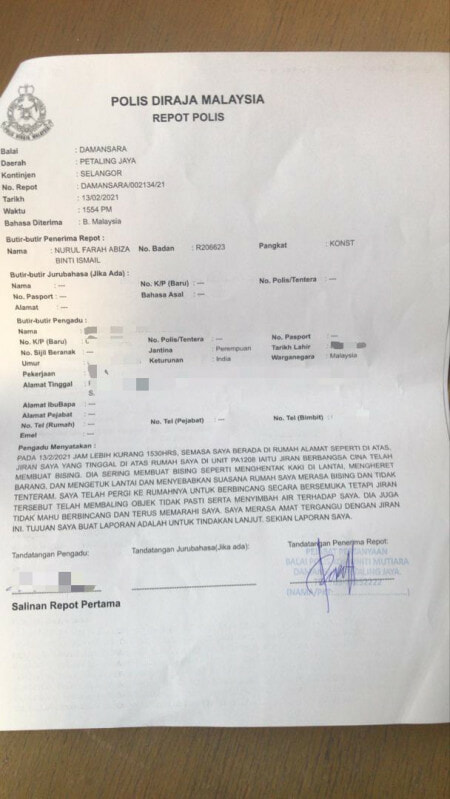 Security then advised her to make a police report, which she ended up doing at Mutiara Damansara police station. However, nothing much could have been done so she was later referred to Damansara Utama Police station to meet Sarjan Fauzi.

“He was helpful. He said he will try to send someone to look into it but asked me to sue them since they can’t take any action towards these people,” Mary explained.

We spoke to the above mentioned neighbours

World of Buzz has reached out to the other party and got the chance to speak to Jazmine, one of the daughters staying with her sisters and mother above Mary’s unit.

“We moved to this building and was living quietly among ourselves, just 3 of us. Then one day, we received a visit from the night security guard telling us to tone down the noise. This was around midnight. My mom was shocked as of course, we were all in bed at the time. We have no idea what that was about and we just waved it off as a mistake,” Jazmine told World of Buzz.

“However, complaints kept coming from our downstairs neighbour about “noise” coming from our unit. Again, three slight-of-build women living together, bare feet at home, are being accused of stomping and dragging furniture,” she explained.

She added on to say that their furniture arrangement has not changed since they had moved in.

“We don’t do renovations during CNY. It’s inauspicious. From the video Reshe posted, it sounded like some renovations or perhaps the sound they created themselves?” Jazmine explained.

“Through the years, we have learned to tolerate Mary’s unfounded accusations until she came to our house with a wrench and caused damage to our gate, along with threats on our safety. We are the rightful victims here in fact, of false accusation and libel. You can have a clear look at us and you will know that as we are all on the thin side, any stomping we may do shall definitely not make the noise that they are claiming,” Jazmine said. 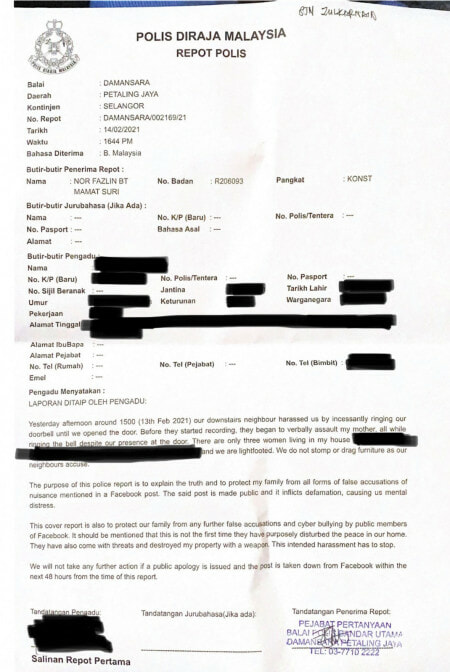 Police report made by Jazmine

“The final straw happened when she once again attacked us as we were getting ready to go out for CNY lunch. She kept ringing the bell and accused us of a crazy tapping sound. There is no point in time that pounding or tapping on the floor is necessitated in the process. We did not make those noises that they posted on FB. We were clearly (as in her own video) in the process of getting dressed up,” she explained further.

When asked why her mother decided to throw salt and splash water at Mary, Jazmine said “We already have a feeling that something unnatural or, if I may be so bold, supernatural, is going on at their house. We believe that salt can ward off evil, and the water was just out of annoyance.”

“How can she keep hearing things that do not exist? If their whole family hears it, then something is wrong with their house as they can make noise complaints in the middle of the night when my household is asleep. This is all I can say about our side. If there was any abuse or harassment going on, it was being inflicted on us, by their family,” Jazmine said.

What are your thoughts about this incident? Let us know in the comment section below. 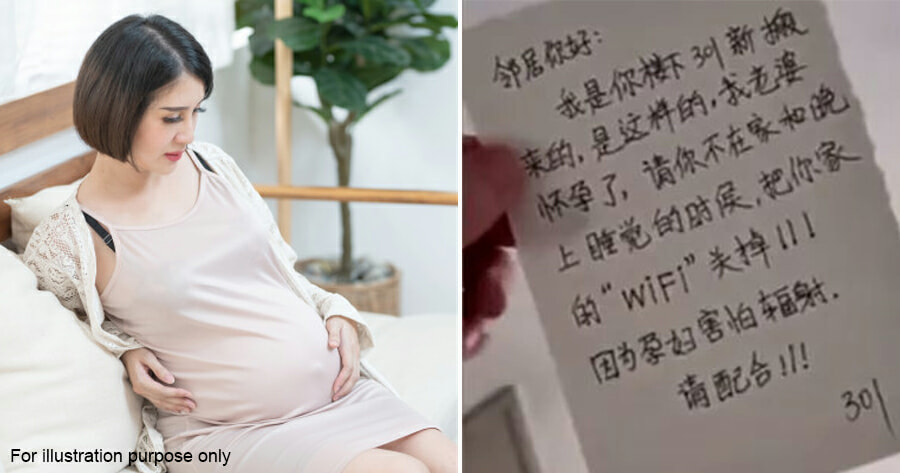