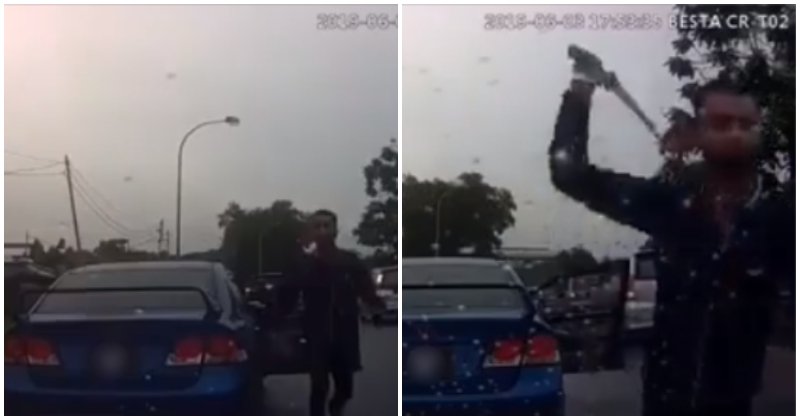 Just when you thought Abang Botak’s 12-month jail sentence would have taught everyone a lesson on road rage, Malaysian drivers strike again.

Malaysia’s latest road bullying viral phenomenon comes in the form of 2 males in a blue Honda Civic, in footage captured along the Jalan Firma road from Perling heading towards the Pasir Gudang Highway, Johor.

In a now infamous video that’s circulating around Facebook, the passengers of the blue Civic initially got down and flipped multiple birds at the driver and victim (off-camera), who honked them for cutting into their lane dangerously, before retreating back into their vehicle.

After traffic moved a couple of inches forward, the bullies decided they didn’t still weren’t satisfied and got down from their car again, but this time the driver can be seen sporting a somewhat small-looking katana (a Japanese sword) or a parang.

Taking a single hack at the victims’ windshield, the man then takes a second to check on the condition of his sword as he gets back into his car and the video ends.

The video, posted by Nabeel Naqie II, has since enraged netizens who spoke out against the fearlessness of road bullies, especially those who dare to carry weapons. Others even tagged the Royal Malaysian Police (PDRM) and suggested that reports be made against the bullies to hasten the process of their arrest.

This comment reads: “Because they brought out a weapon, what say they receive 10 years in jail as a lesson that they cannot do as they please to others.”

Nabeel pointed out that the incident happened on the 3rd of June and that the passengers of the Civic can be charged under the Corrosive and Explosive Substances and Offensive Weapons Act 1958 for carrying the katana.

Johor police have since called for the driver to surrender himself while urging eyewitnesses to come forward to assist with investigations. The car they are driving

Come on guys, can’t we all just scream profanities in our cars like normal people? 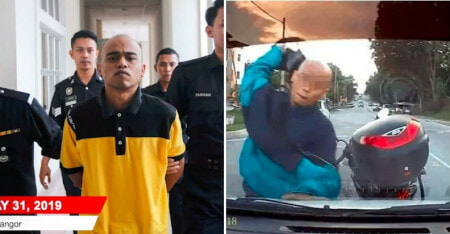