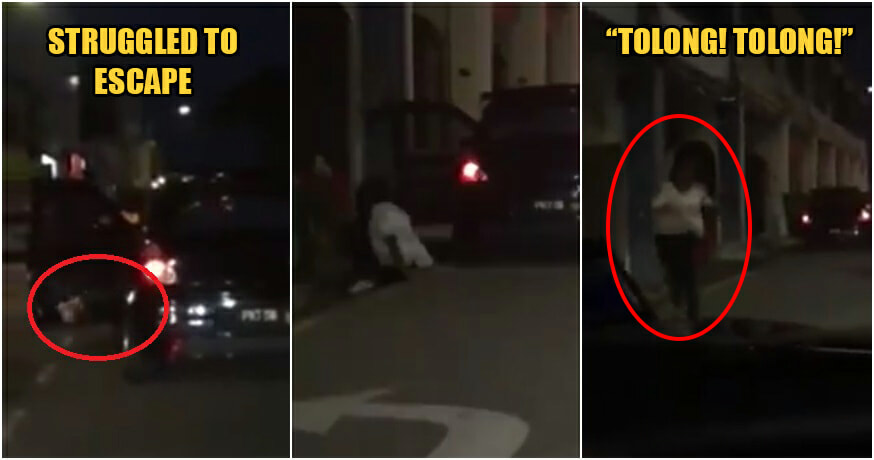 In worrying news to emerge from Penang, it has been reported by netizens that a young woman was seen in distress after trying to flee from a moving vehicle late last night (29th August 2020) along roads surrounding the Komtar building.

The incident, which was caught on camera by a driver and his passenger in another car behind the suspect vehicle, saw the young woman’s legs dangling dangerously out from the front passenger seat of what appears to be a black Suzuki Swift Sport. Tailing close behind when they noticed that the car was driving erratically, the duo eventually noticed the lower-half of a woman’s body struggling to break loose.

Appearing as though they were attempting to flee after being caught with a woman trying to escape from their car, the black Suzuki can be seen weaving dangerously through traffic, very nearly causing an accident. Other motorists who caught on to the scene of panic tried honking down the car to no avail.

The woman eventually managed to break free and scramble away from the car after it stopped along a road shoulder when blocked by a row of cars that were waiting on a stop light. Panicked and seemingly frightened for her life, she could be seen screaming for help. The black Suzuki Swift managed to escape the scene.

Details are scarce as of writing, but according to China Press, Penang police have yet to receive any reports concerning the incident as of 10.00pm last night.

Those with information concerning this incident are advised to report to the nearest police station. We hope that the female victim is safe.

Also read: Video: PDRM Corporal Who Was Sacked In 2018 Robs Woman From China Off RM5,000 In Ampang