The dust has hardly settled. Not long ago Russian troops were bearing down on Ukraine’s capital — now the story of this chapter of the invasion is already being told in a museum.

Even as the war rages elsewhere in the country, Ukrainians are flocking to a new exhibition in Kyiv displaying artefacts recovered after the Russian army was forced to withdraw from areas it occupied around the capital.

Missiles, food rations, helmets and other objects abandoned in the region north of Kyiv are being shown in an exhibition at a World War II museum — known as the “Great Patriotic War” in Ukraine. 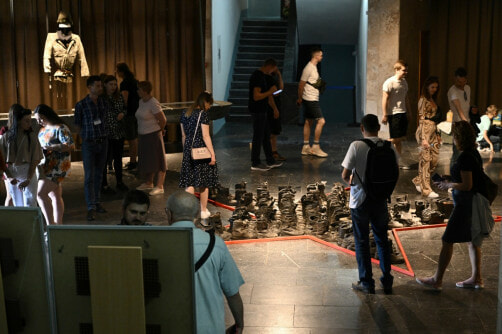 Glass cases display personal notes and the credit cards of Russian soldiers killed on the front line in a vital early record of the bloodshed.

Curator Yuriy Savchuk said he wanted “to respond to Russian propaganda”, adding that Moscow has set up its own show “on the so-called fascism that should be fought in Ukraine.”

“You can see and touch the war with your fingertips here,” he added.

“That’s also the point: to shock people into realising what’s going on.”

It might seem strange that Ukrainians should want a reminder of a war they are still living through. But not everyone in Ukraine witnessed the fighting first-hand — and many want to understand what took place. 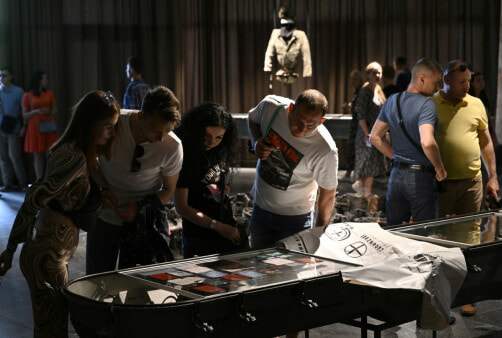 “It’s a good thing I didn’t live in one of those villages when the Russians were there.”

In the museum’s cellars, there’s a reconstruction of a makeshift shelter from the town of Hostomel, close to Kyiv’s airport. The original housed dozens of people for 37 days — among them children and a six-month-old baby. Two people died in the humid, unsanitary conditions.

On a screen on the wall, the baby’s mother gives chilling video testimony. On the first floor, a church gate ripped open by shrapnel opens to reveal a room displaying artwork inspired by the conflict.

Ukrainian artists have also reused material from Russia’s invasion to express their pain.

Burnt-out candles beneath a war-torn painting of Christ pay tribute to the dead, as well as to Ukraine’s damaged religious heritage. 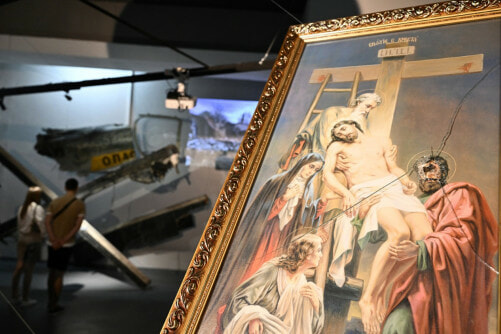 A grenade hidden under a toy in a sandpit recalls that the childhoods millions of young Ukrainians have lost.

There is also a broken World War II memorial from Hostomel, drawing a powerful parallel between the two conflicts. Today’s invaders are the descendants of yesterday’s heroes.

The exhibition, titled “Ukraine — Crucifixion”, is housed in the National Museum of the History of Ukraine in the Second World War.

The artefacts were collected between 4 April and 5 May and the show’s rapid opening on 8 May came with help from the Ukrainian army and government. 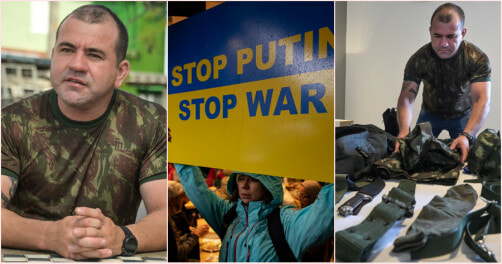