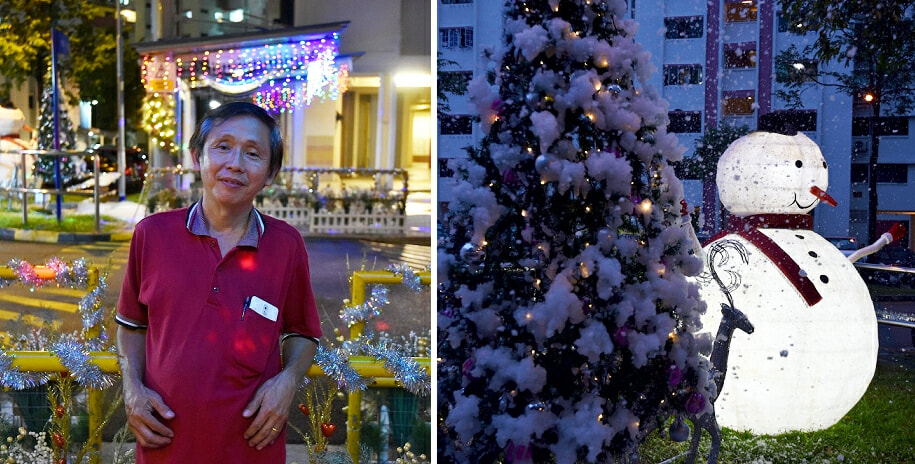 Let it snow, let it snow! That’s exactly what’s happening in one part of Singapore, Marsiling.

A 56-year-old resident known as Mr Tan Koon Tat has transformed a corner of the car park on his block into a little piece of winter wonderland. 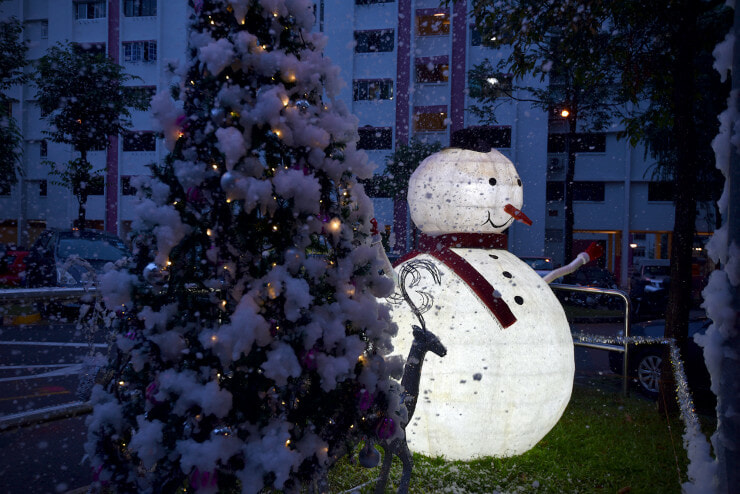 Mr Tan who is a carpenter by day, took it upon himself to make a snowman and snow machine for the Christmas season!

And creating it is no simple task. It took him a week to complete the snowman itself! The snowman measures 2.2 metres in height and is made using thick metal rods, light bulbs and white felt, and all the decorations cost about RM6,200!

Why would he go to such lengths to put in ‘extra’ work and money?

Well, Mr Tan with the biggest heart said that he does all these decorations to put a smile on others’ faces! 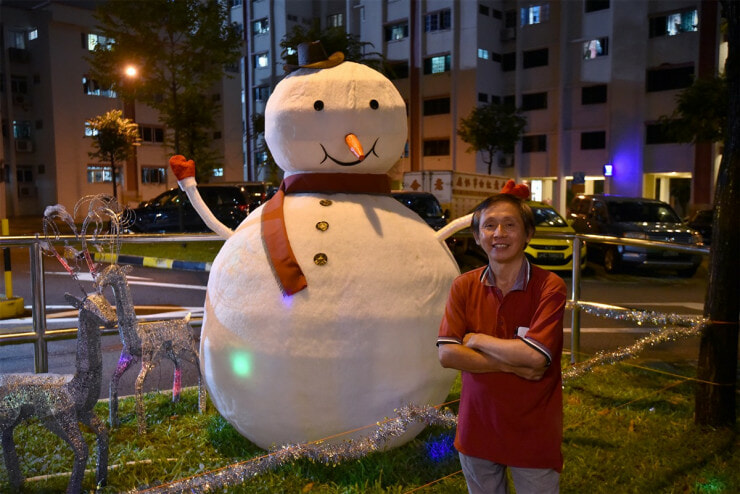 “When I see the gleeful faces of fellow residents or passers-by, I’m elated as well. It gives me a sense of satisfaction,” Mr Tan said in Mandarin. “I hope more Singaporeans will stay in Singapore to soak up the festivities and not travel overseas – that’s my wish.” reports Channel News Asia.

“Instead of spending money alone travelling, I might as well spend it on the decorations and let fellow residents be happy,” Mr Tan added. 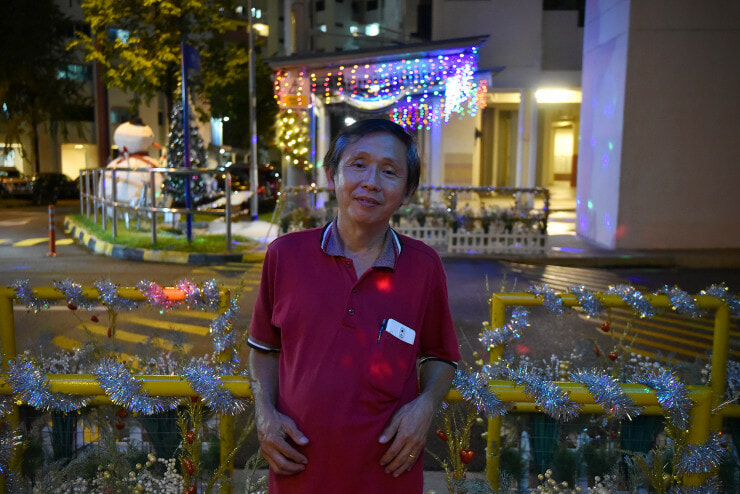 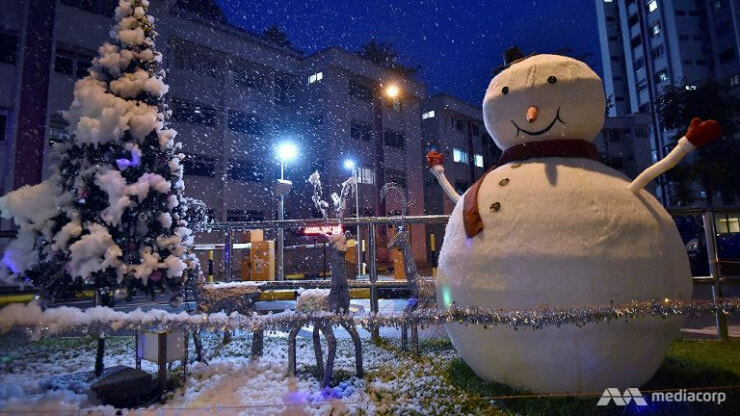 This kind man doesn’t even mind if his decorations are inevitably vandalised, as he merely shrugs it off and even has spare ornaments for redecoration.

“I expect vandals to turn up so I buy spare decorations,” he said.

“It’s OK if you ruin it – I will just put up the decorations again the next day. And I will continue doing so until they stop. For example, the presents underneath the Christmas tree get stolen even though they are just empty boxes.”

On a side note, shame on you vandals!

This tradition started 10 years ago on Chinese New Year, when Mr Tan first began decorating the corner with ribbons and lanterns. After that, he also does decorations for other festivals such as Hari Raya Puasa, Deepavali and National Day to celebrate the cultural diversity present in Singapore (just like Malaysia!). 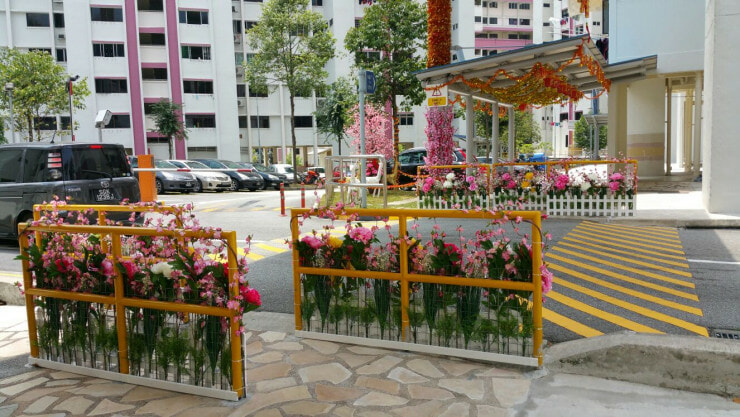 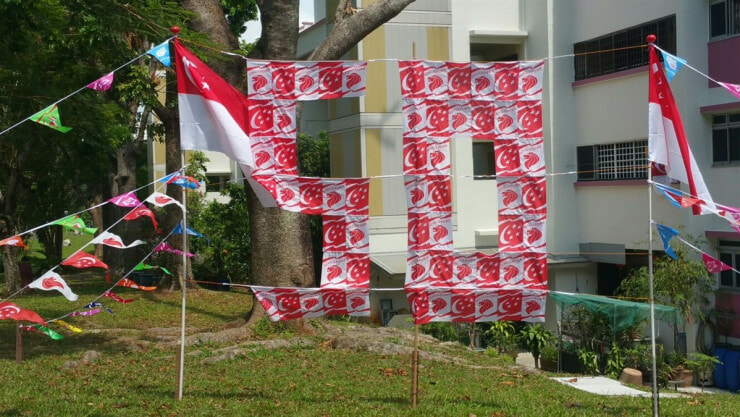 The cost to turn the corner into a bedecked and bedazzled area doesn’t come cheap for all these festivities, as for just this Christmas, Mr Tan estimates the bill to be about S$2,000 (RM6,200) while for Chinese New Year decorations can run up to S$5,000 (RM15,500) alone. What’s more, he also pays for the electricity used to power the ornaments, which costs about S$100 (RM310) for each festival. Somebody give this guy a medal!

The MP of the area herself also took notice of his decorations and told Channel News Asia that she is grateful for residents like Mr Tan who ‘takes time to make the place better for everyone’.

Mr Tan has already planned to incorporate three 1.3-metre-tall roosters to usher in the Year of the Rooster. So if you’re in the area, check it out! Or maybe, take upon yourself to spread the festive joy!