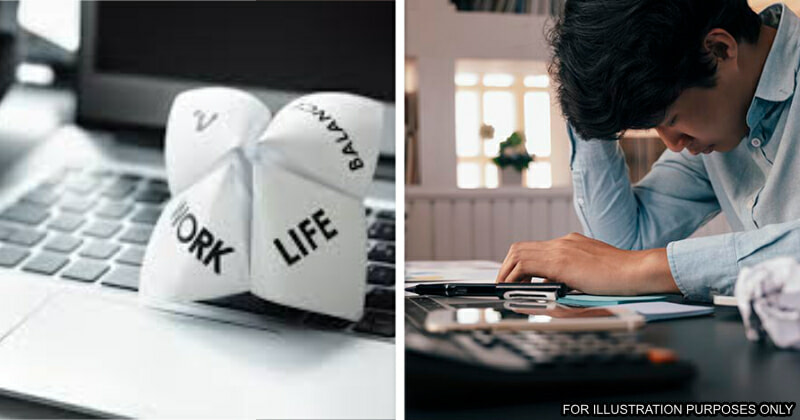 Recently, a Facebook post by a Singaporean man has gone viral and sparked debates within the country as well as in Malaysia. In the post, the man, known as Kenji Ong shared how he is contemplating tendering his resignation at his current company after having to return to the office where he has too much free time on his hands.

Furthermore, Ong also said that working back at the office feels very tedious after an extensive period working from home due to the pandemic. He also feels very unfulfilled due to the lack of work at the office, whereby he is only receiving ‘20 to 30’ emails a day. Ong further lamented that working from home gives him ‘a better time’ as he could complete his daily tasks in just ‘2 to 3 hours’, with the rest of the time being able to do his own things. 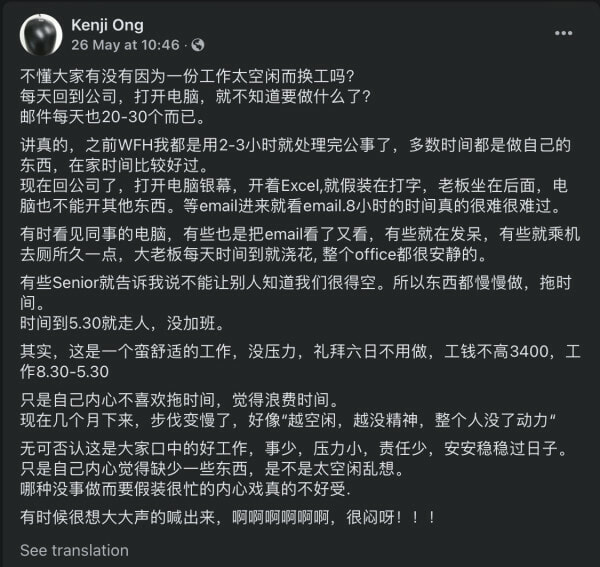 Besides that, Ong also commented on how it is ‘very difficult’ for him to spend multiple hours in his office pretending to key in data on Microsoft Excel during this free time as his boss is sitting right behind him. He also claimed that his colleagues are likely feeling the same and said that he has observed them ‘zoning out’ as well as ‘looking at their emails over and over again’ or even spending an extended period of time in the toilet.

Moreover, Ong also claimed that his seniors have told him to not complain about the lack of work and instead to just take a longer time finishing his work for the day. The man then shared that his salary of SGD3,400 or RM10,832 per month is ‘a pretty comfortable one’ considering it has ‘no stress’ of having to work overtime or weekends but he just felt that the lack of work at the office is a ‘waste of time’. Hence, the relaxed nature of his work has had the ironic effect of making him feeling stressed, less energetic and less motivated.

The story has since been published in various publications, including Malaysia’s China Press here. In the comments of the post, many responded to Ong whether his company is still hiring as it sounds like an ‘ideal’ job for them. However, Ong clarified that his company is not currently hiring though he is actually the fourth person to be hired for the position as those before him has resigned ‘after a few months’ for unknown reasons.

Ong also said that his job is an admin staff and that the pay is not as high compared to others working in the country. After his story was widespread in the media (well, including this one), Ong said that the name Kenji Ong that he is using is actually a pseudonym and was thankful that he didn’t use his real name.

Regardless of what name he is using, the story is widespread due to how relatable it is to many people in Singapore and Malaysia. What do you guys think? Have you been in the same position that Ong is currently in? Share your thoughts and stories with us in the comments! 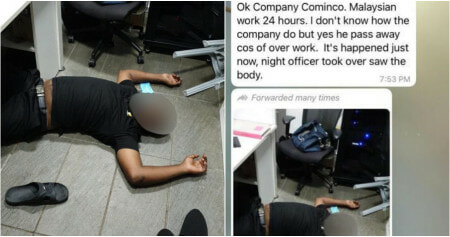