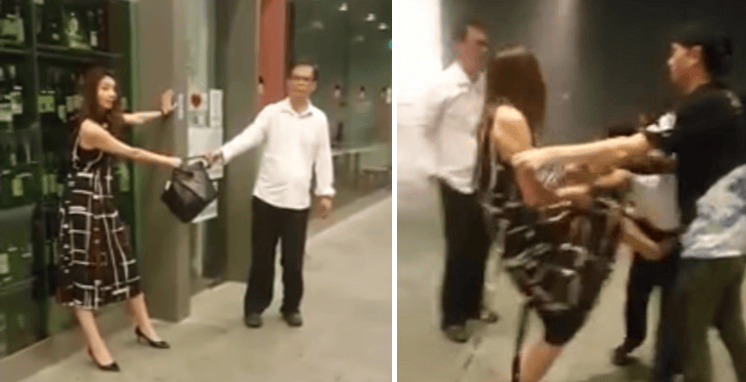 It appears that a pretty face does not mean that you have a personality to match.

The reason? She refused to pay her taxi fare.

In the first video, the taxi driver is shown to be holding onto the woman’s bag to prevent her from escaping while she hurls verbal insults and hits him aggressively.

A mini tug-of-war ensued and the woman can then be heard saying, “I have a lot of money!” while the innocent taxi driver has no choice but to stand there and take the verbal and physical assault.

She also challenged the taxi driver to call the police and the person recording the video assure them that the authorities have been alerted and are on the way.

The second video depicts a second brawl of the same woman but with a female security guard and another worker. In this video, the woman continues to spew profanities while hitting the female guard.

However, the brave guard continues to hold on to the woman even after she received a kick in the groin. The taxi driver from the first video can be heard in the background shouting that the woman used her mobile phone to hit the security guard’s head.

The worker also stepped in to prevent a full-blown fight from escalating. The end of the video shows the female guard displaying her injured hand that was scratched and bloodied by the woman to the camera.

The woman is believed to be from Hong Kong. Currently, it is not known how the situation has been resolved.

I guess the saying “Don’t judge a book by its cover” does ring true!