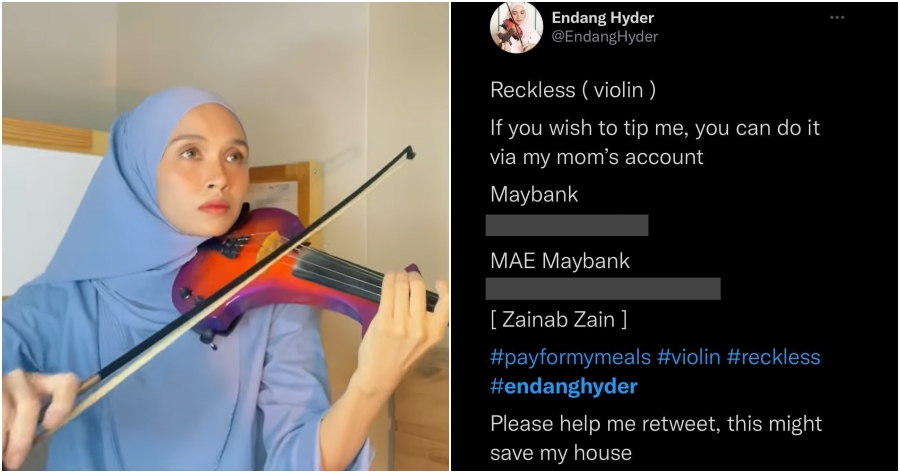 The pandemic as well as the various lockdowns have undoubtedly caused many to undergo hardships they probably would have never experienced before. However, it has also led to the discovery of more innovative methods to make a living.

Malaysian violinist, Endang Hyder who does violin covers of popular Western and local songs has adapted to the digital world by asking for tips from members of her audience.

In a Twitter post that has garnered plenty of attention, Endang shared her performance of a violin cover of Madison Beer’s latest hit, ‘Reckless’.

If you wish to tip me, you can do it via my mom’s account

Please help me retweet, this might save my house pic.twitter.com/bRo1Xtq88M

In the post which currently sits on over 6,000 likes and 5,900 shares she said, “If you wish to tip me, you can do it via my mom’s account.” Endang attached a variety of ways for her audiences to help support her, including several bank accounts and e-wallets.

Who is Endang Hyder?

The accomplished violinist has played the violin ever since she was 10-years-old, sat for her Grade 8 exams under the Royal Schools of Music when she was 15, and for an Associate of the London College of Music qualification when just 19, before studying classical music at Queen’s Music.

While she has performed professionally both in Malaysia and abroad from a young age, she decided to stop doing so due to the birth of her first child as well as to take care of her father when he became ill in 2013.

This prompted her to shift her performances online to her YouTube channel where she performs violin covers of classical and popular hit songs.

The effects of the pandemic

Speaking to WORLD OF BUZZ, Endang, who is a mother to three children currently living with her parents in Kampar, Perak, said that the pandemic has worsened her situation and led to her not being able to find a full-time job.

“Pre-pandemic, I was doing well as a music teacher specialising in violin, cello and piano and was earning a stable income.”

During the lockdown last year, Endang was forced to sell one of her violins which was worth more than RM20,000 to fund a wheelchair for her father who had lost his legs.

She expressed her gratitude to several NGOs which had helped her during that time. But she explained that as we continued to go into lockdown, eventually the money was insufficient.

To make matters worse, she said that she was previously offered a job at the Perak state government by the previous Perak Menteri Besar, but this offer did not come to fruition due to the former MB’s resignation from office.

Additionally, Endang also mentioned that several NGOs had reached out to her previously and used her story to raise money, meant for her, however, she has not seen or received said money.

“This leaves me with doing virtual performances in the hopes that people will enjoy my content and decide to support me.”

She said that she might have to let go of the house that she had just bought six months before the first lockdown due to her current predicament.

“I hope that people just share my music so that there’s a possibility of getting more tips and earn some form of income whilst finding a secure job,” she added. 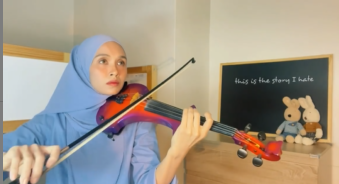 Endang also urged other musicians and artists to follow suit but she also acknowledges that she has been blessed with a strong following on her social media pages and YouTube channel.

“This way, I can entertain people and not have to resort to crowdfunding and asking my followers for money. I want people to see me as a musician that is still trying their best despite the difficult situation to secure my future.”

To watch more of Endang’s performances and covers, do check out her YouTube channel.

Hopefully, Endang manages to raise enough money to ensure that she does not get her house taken away from her! 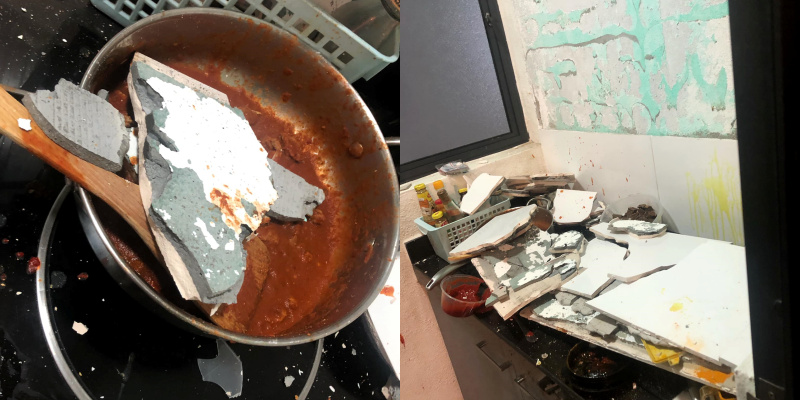