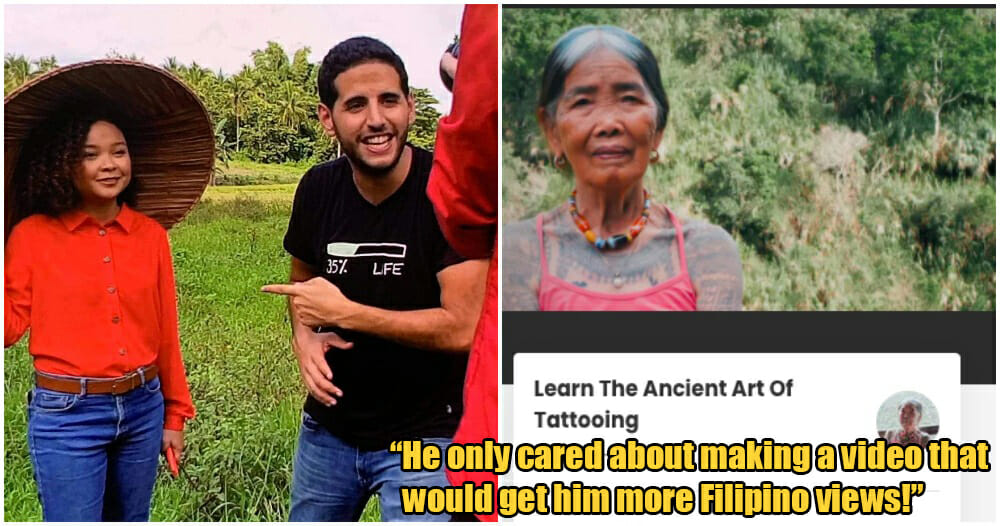 “I should have known better, that this man was exploitative and fueling a neocolonialist narrative using our need for foreign validation.”

People from all over the world have always regarded the videos of Nusseri Yassin or more popularly known as Nas Daily as inspirational and many have even praised him for giving voice to the downtrodden. However, is the content creator hiding something sinister behind this positive facade? 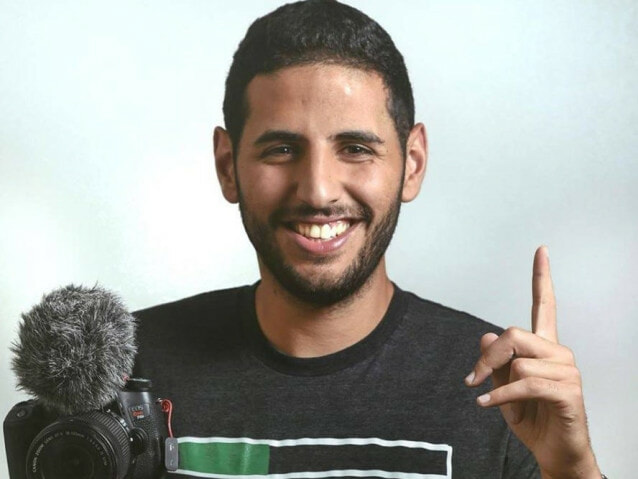 CNN Philippines reported that an online course supposedly taught by revered Filipino tattooist, Apo Whang-od Oggay, or better known as Whang-od was taken down by Nas Academy after the granddaughter of the 104-year-old called it a “scam”. 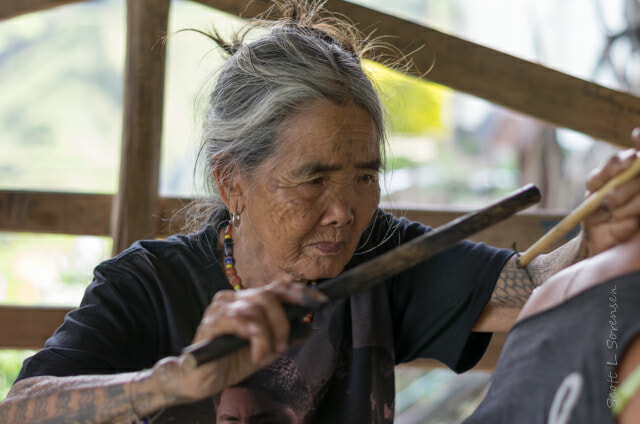 Nas Academy is a platform founded and headed by Nas Daily. It is said to be a “virtual university” for content creators to learn the skills of the future. 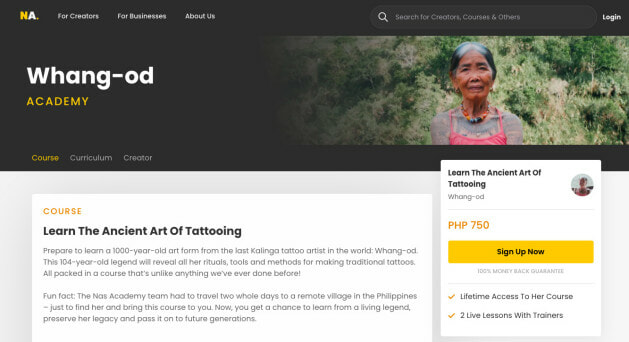 A preview of the course that has since been taken down from the website.

Whang-od’s granddaughter, Gracia Palicas said her grandmother never agreed to teach an online class nor did she ever sign a contract with Nas Academy. The since-removed course priced at P750 (RM62) was said to promote lessons on Whang-Od’s journey, her methods in traditional Kalinga tattoo making, and the cultural aspect of her medium.

“PLEASE HELP US STOP this disrespect to the legacy of Apo Whang Od and the Butbot Tribe.”

“He only wanted content, a good, easy story to tell that would get him more Filipino views.”

In light of these allegations surfacing, Cacao Project founder and Honoree of the featured Forbes Asia 30 under 30 Louise Mabulo, decided to call out the content creator on a Facebook post. In 2019, Nas Daily went to her town to cover her story on The Cacao Project. During that period, Louise was gaining press exposure and building upon opportunities due to the United Nations Environment Programma’s recognition of the work she does in her hometown for her farmers.

When Nas approached her, Louise said she was a huge fan of his work, even watching his clips daily. Her family took him and other content creators as welcome guests with the typical hospitality they are known for. Unfortunately, in a very short period of time, she was disappointed to learn that the man she’d looked up to for years was not the man he’d misled his followers to believe.

“I watched him imitate and mock the local accent and language, vocalising Tagalog-sounding syllabic phrases saying it sounded stupid.

He repeatedly said that the people of my hometown “poor”,  “farmers are so poor!” “why are Filipinos so poor?”” 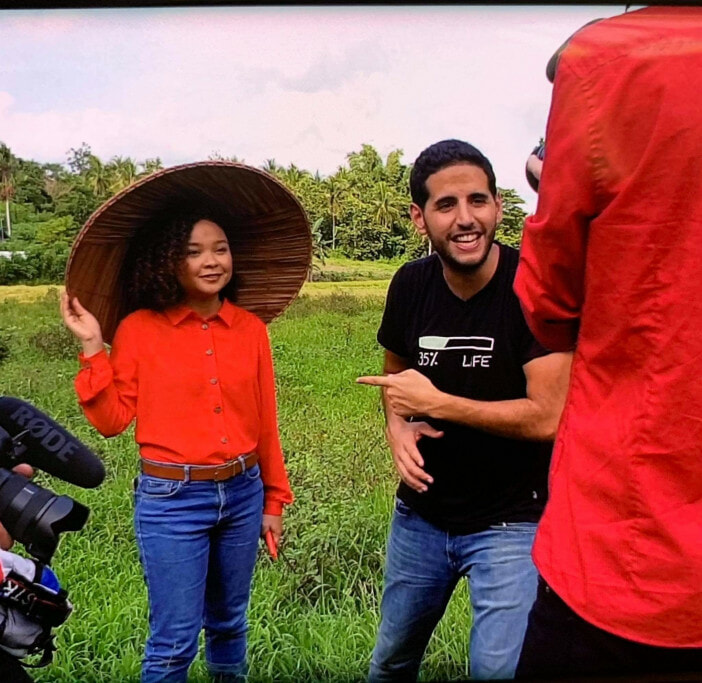 Louise alleged that Nas said no one wants to hear about farmers or farms as it’s not clickable content. He only cared about making a video that would get him more Filipino views. He had even joked at the start of the day that all he needed was to put “Philippines” in the title and he would rack in millions of views and the comments would come flooding with brainless “Pinoy pride” comments.

Her family had received no greeting or thanks for welcoming him and his team into their house and he even went as far as to say that they were only wasting his time. “He refused to eat food my mum had spent the whole morning preparing for him knowing that he’d be tired or hungry,” she said.

Louise added that she has worked with multiple journalists, filmmakers, professors who have seen her work, interviewed and even featured them but they have never had such a negative experience before.

“Blatant discrimination of my people, no regard for local customs or cultures, and he’d built a story in his mind without meaningfully understanding the context of what he was going to cover.”

“I should have known better, that this man was exploitative and fueling a neocolonialist narrative.”

Nas had refused to let anyone take a break or even eat and even blamed his lack of “presentable click-worthy content” on her and had even claimed that everything is not clickable or viewable. This left Louise exhausted and found her tolerance running low. She had been fully transparent on their phone call that she didn’t think her work would be something he’d be able to visualize as there are too many factors to the work she does which would make it virtually impossible for it to be covered in under one minute.

The content he wanted would probably be ready in five years time but definitely not back in 2019. He had allegedly assumed that Louise’s venture is to replace coconuts with cacao when in reality this was unrealistic and not the goal of the venture, which is to diversify the farmers’ income streams. Both parties then came to a mutual agreement that it was best that he leaves.

Louise stayed silent all these years knowing the type of backlash she would receive for calling out Nas. She had also been haunted with the knowledge that he could manipulate years of her work with a single, carelessly misinformed video. Louise also chose to not risk her hometown and the farmers over the influencer.

She then praised Gracia for actually stepping up and calling out Nas Daily’s exploitative behaviour and the fact that Nas Daily refused to take down his video until Gracia took her Facebook post down is a clear sign of systematic silencing and the Nas Daily team still continue to hope to continue making money off the Filipino culture.

“His response to the issue illustrates a video of Apo Whang-Od signing a dubious contract— the same strategy colonizers used to mislead indigenous people to sell off their land, happening now action in the 21st century, except instead of land, it’s data and content and tradition being sold.”

Louise called for all Filipinos to stand together on this issue and not allow people like Nas Daily to continue capitalizing on their culture and how all Filipinos should rid themselves of neocolonialism or colonial mentality. “Nas chases Filipinos for content because he knows his validation of our country gives him fame. We dictate the tide. We dictate the trend and virality,” she said.

I’ve held my silence for 2 years, however in light of recent news, it’s high time I break it.In 2019, Nas Daily had…

Nas Daily has since released a statement on the issue saying that he had also kept his silence for the past two years but he can’t keep silent and let her share falsehoods on the Internet for free. He added that he flew from Singapore to the Philippines just to support her.

“That is borderline illegal. Everything you said is with malicious intent and it is clearly not how I speak. We have 5 years of evidence to back that up.”

We reached out to Louise who clarified that she will not be commenting further on this issue while we’re still awaiting a response from Nas Daily and Grace. Let us know what you think of this! 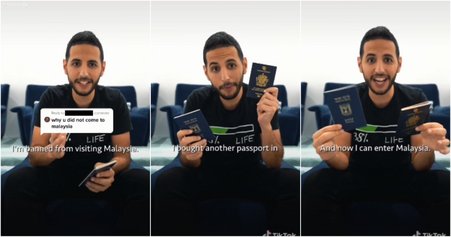