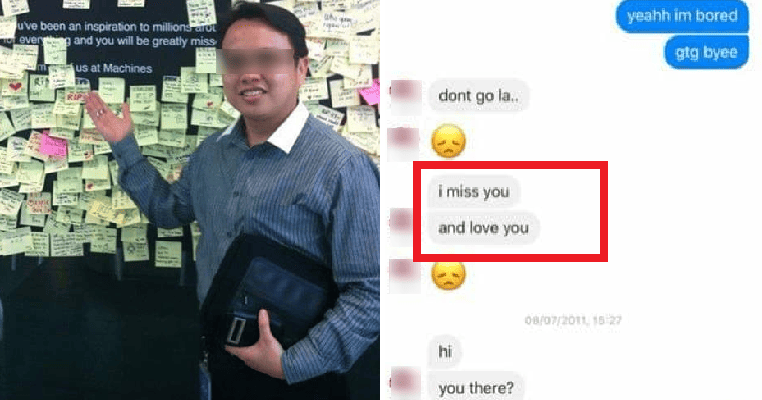 It is never okay to prey on young and innocent children who do not know better especially when you are supposed to be a respected adult. Recently, a Facebook post by Kembara Kitchen founder William Cheah went viral as netizens were in an outrage over the revelation of this Malaysian man known as TC (not his real name) in his 30s who had allegedly been preying on young girls in churches and NGOs for at least 15 years. That’s a long time! 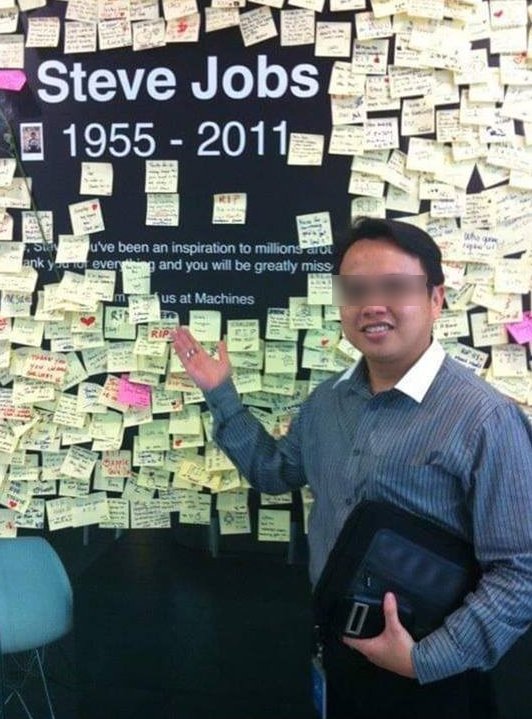 William was shocked when Miss L, a 14-year-old girl suddenly spoke up and told them she did not feel comfortable with TC joining them as his name had come up when the team of volunteers were discussing upcoming events. “She showed us the messages he had sent her and I can tell you that it’s not appropriate for an adult in his 30s to be sending that kind of messages to a then 13-year-old girl. Especially someone you just met during a community service event,” he explained.

William shared this piece of news with his regular group of volunteers and received another bombshell when Miss C said that she had the same experience when she was 19 years old last year. In the post, screenshots of the conversations he had with his victims were indeed severely inappropriate. 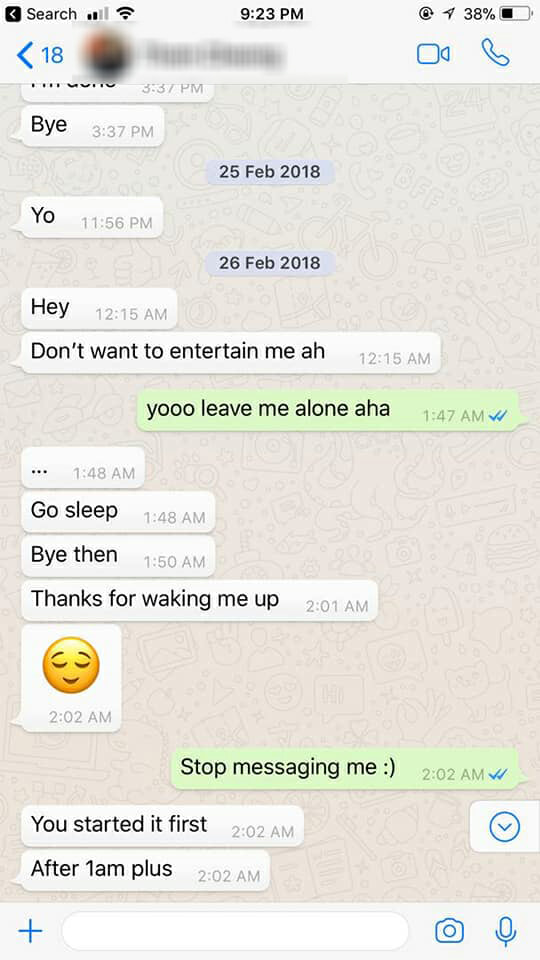 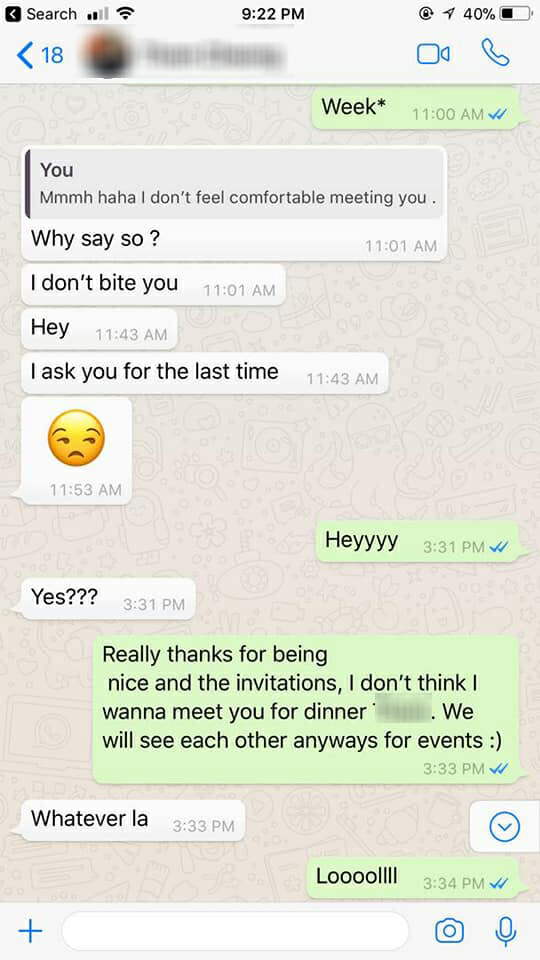 TC would always compliment his “target” and give them pet names; he would also ask to be their pet brother, always trying to get them to meet up face to face. Apart from that, he would constantly pester them on WhatsApp and Facebook Messenger even when the girls said very clearly that they did not feel comfortable talking to him. Desperate much, bro?

Angered by TC’s actions, William said in his post that Kembara Kitchen would ban him from any events and condemned the man, saying that the worthy organisation had nothing to do with TC. 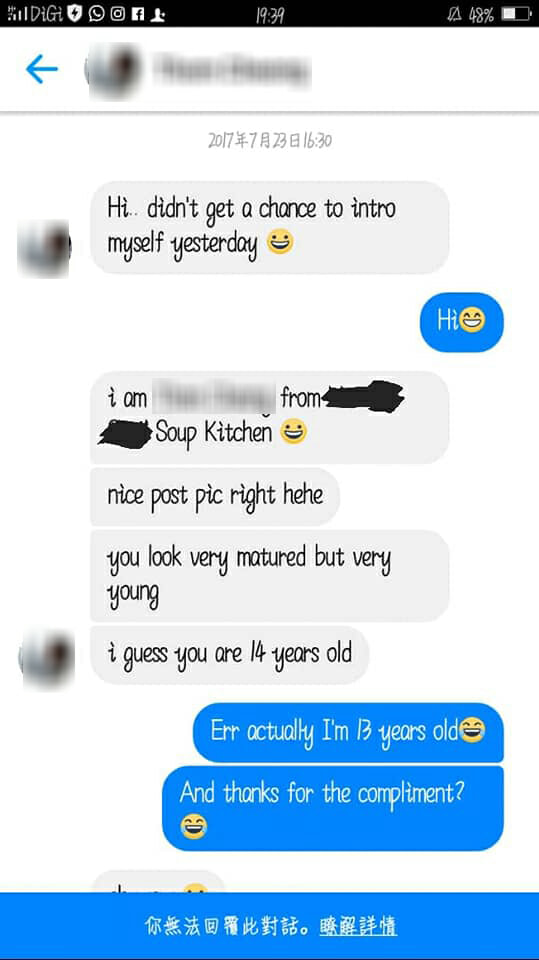 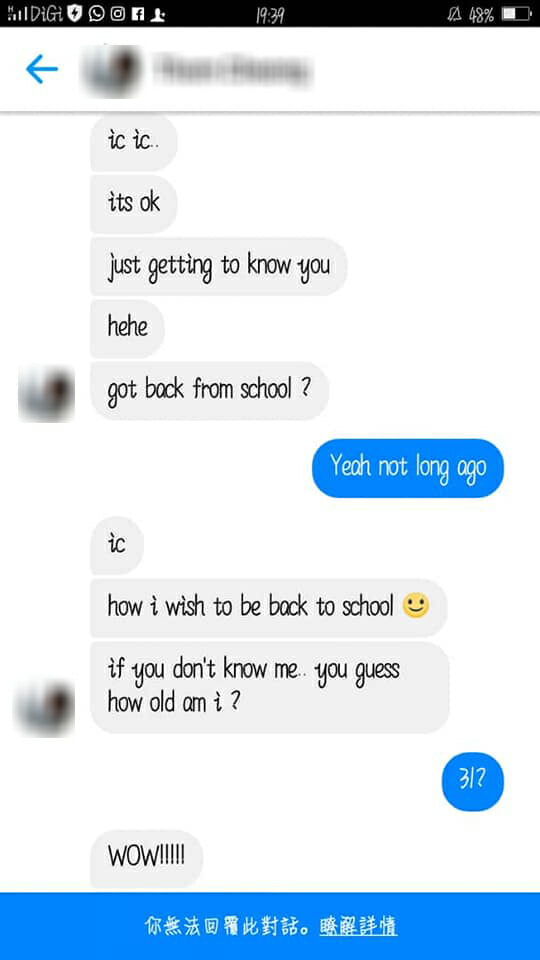 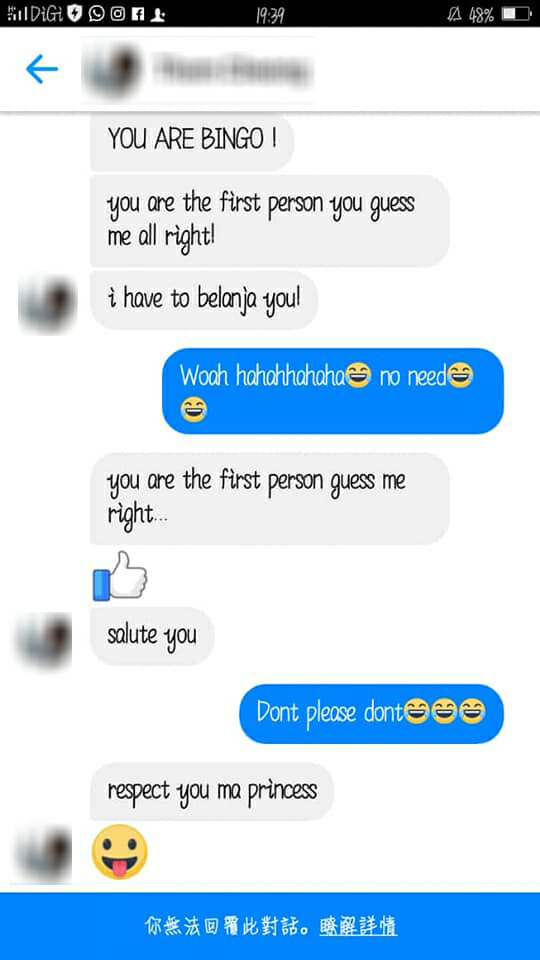 “I disavow any association with TC, and that he has no links whatsoever with Kembara Kitchen nor did we know of these harassments he undertook while joining in our activities. Never in my worst fears did I expect an adult veteran volunteer known in the activist community to behave in such a manner, even to the inclusion of underage girls,” he added.

Not long after he posted this status, TC deactivated some of his social media profiles as he was receiving heavy backlash from furious netizens but it looks like he has many other social media accounts. However, that is not the end of the story because William’s exposé encouraged many other women to come forward and they all said the same thing – that they too, were victims of TC’s harassment. Who knows how many girls he has harassed in total! 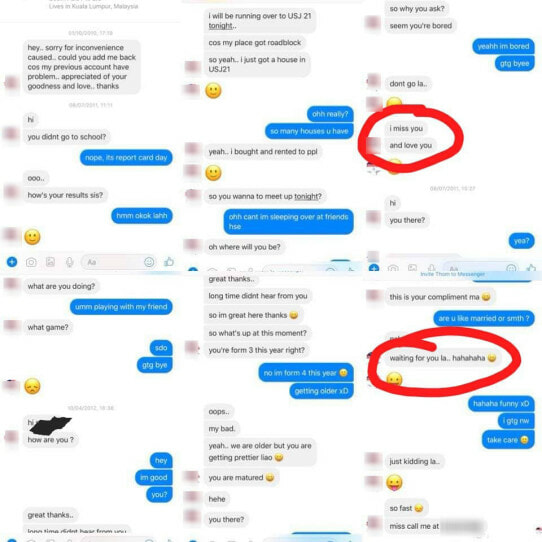 Apparently, he had been doing this since 2003 and many of the women he harassed were in their teens or preteens when they were his targets. He would often get to know these young girls through similar charities or volunteer events happening in churches or schools. That’s disgusting!

In another post, William said, “What I cannot understand is how this was kept hidden for so long? Was it fear? Stigma? Shame? How could organisations just kick him out without warning the rest of us? I am not blaming anyone. Don’t get me wrong. I am just trying to understand what went wrong. I know there is every chance I may get sued by him. Or whatever. That this may cause trouble for me but this isn’t an isolated incident.”

Here are what some of the women who were his victims said: Although no police report was made because no crime was committed, it looks like things may not be so easy for TC in the future. Child sexual grooming has been officially classified as a crime in 2017 when the Sexual Offences Against Children Act 2017 was passed.

According to Section 13 of the same act, child grooming is defined as “any person who communicates by any means with a child for the intention of committing an offence under the Act”, with a maximum punishment of five years imprisonment and whipping. Section 14 is regarding the offence of meeting a child following grooming, which is punishable with a maximum 10-year imprisonment and whipping.

It’s important to speak up and expose creeps like this! So, don’t keep quiet and make sure these perverts are brought to justice! 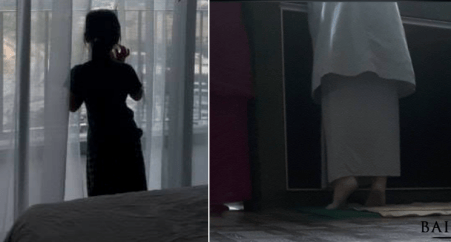