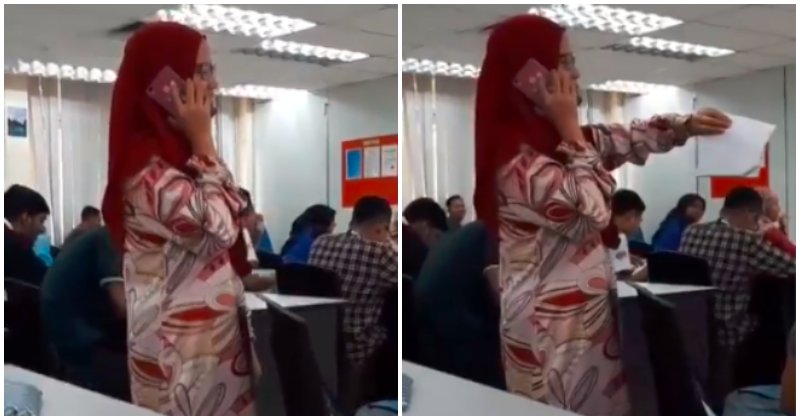 Malaysian students in general can relate to the fact that if you’re even 15 minutes late for a lecture, you’re not going for that class at that point.

Most lecturers would lock classroom doors after a specific amount of time in order to avoid students coming in late and disrupting the flow of the lecture.

But not this lecturer.

Nan_ (@Nuneon1) took to his Twitter account to showcase what his lecturer had said to a student who chose not to attend a class because he had overslept. The lecturer can be seen in the video, talking on the phone to the student.

Nun_ wrote, “When the lecturer delivers a winning argument to a student who overslept.”

In the video, the lecturer can be heard saying to the student on the phone, “There is another one and a half hours until the end of the class. Your house is nearby right? Even 5 minutes worth of knowledge will be beneficial for you to catch up in class. You can still make it. But don’t rush. Ride your bike safely.”

Many have since praised the lecturer, saying that her kindness should be an example of lecturers everywhere.

This comment goes, “This is what we called an EDUCATOR.”

Many others were somewhat against how the lecturer had not only condoned the student’s absence and tardiness, but also how she had basically opened the door for the rest of her students to abuse her leniency.

This retweet says, “Can we not normalise the culture of being late for class? It’s so unfair for the people who arrive early because lecturers will normally wait for those who are late. And those latecomers would normally come in unfazed.”

Don’t worry though, for netizens didn’t attack the kind lecturer, their anger was more so directed towards their peers who would take advantage of the lecturer’s tolerance by either coming in late or not coming in at all, which can effect the lecturer as well (when students choose not to go for classes and skip lessons, their examination results tend to be a lot worse than the other students, which can, in turn, be blamed on the lecturer.)

Nan_’s video of his kind lecturer has since garnered over 18,900 retweets.

What do you think? Should lecturers be more lenient with their students or should latecomers be punished accordingly? Let us know in the comments section!