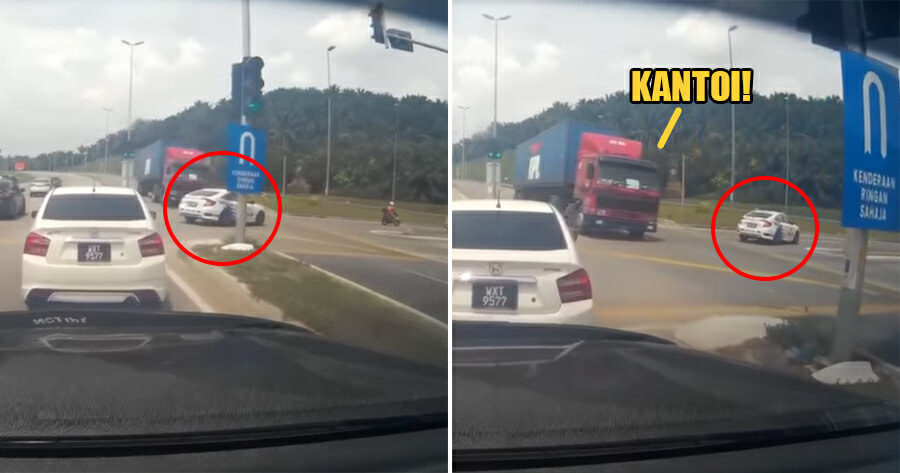 A trailer lorry was caught beating the traffic light right in front of a police car at the Kota Puteri intersection on the LATAR Highway on 8 November.

In a video posted on Facebook page, Info Roadblock JPJ/POLIS, dashcam footage shows several cars waiting at a traffic light while vehicles on the opposite side of the road were moving.

After the traffic light turned green, vehicles on the right lane began turning right at the intersection, but a trailer lorry coming from the opposite direction did not stop.

In doing so, the lorry almost collided with a vehicle that was crossing the intersection which turned out to be a police car. Oops!

The police car immediately stopped driving while the lorry began reversing in attempts to ‘get back in line’. The owner of the vehicle with the dashcam can be heard saying “mampus kau!” repeatedly, which directly translates to “you’re dead!”.

After passing the intersection, the police car had turned on its siren lights, which indicates that the police officer had intentions to approach the lorry driver for trying to run a red light. Hopefully, the lorry driver was given the punishment due for running a red light and for causing potential harm to other motorists on the road.

Also read: Watch: Lorry With Cargo Container In Penang Drives Over Curb Into Opposite Lane